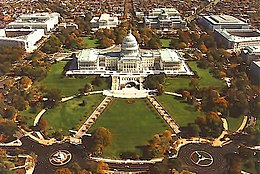 Aerial view of the Capitol Hill.
(Image by (Not Known) Wikipedia (commons.wikimedia.org), Author: Author Not Given)   Details   Source   DMCA

Around the US, "essential" workers are going to work everyday and doing their jobs, COVID-19 pandemic or not. Factory workers are producing things. Truck and delivery drivers are transporting those things. Grocery store employees and food service workers are making sure food reaches our tables.

Congress, not so much.

When US Representative Thomas Massie (R-KY) tried to require his fellow politicians to actually show up at the Capitol to vote on the biggest one-off welfare handout in human history, and to record their votes for posterity, all hell broke loose.

House Speaker Nancy Pelosi (D-CA) called Massie a "dangerous nuisance" for having the gall and temerity to suggest that the House get the constitutionally required quorum (216 members) together and put them on record instead of just pretending it had such a quorum and holding an undifferentiated voice vote.

US Representative Peter King (R-NY) said it was "disgraceful" and "irresponsible" of Massie to imply that King should show up for work instead of sitting at home in New York collecting his $174,000 salary, his lavish fringe benefits, and his comfortable retirement package.

President Donald Trump called Massie a "third-rate grandstander" and advocated his expulsion from the Republican Party. I mention this only to acknowledge Trump's expertise in third-rate grandstanding, and to suggest that he's not otherwise qualified to so much as carry Massie's briefcase.

Massie called for a recorded vote. The chair pretended to count those standing in favor of a roll call vote and announced there weren't enough.

Upon Massie's further objection that the House lacked a quorum, the chair spent four seconds pretending to count to 216 in a nearly empty chamber before asserting that yes, there was a quorum, and declaring the bill passed.

If any other body pulled that kind of stunt, its members would find themselves in court answering to charges of honest services fraud. But when Congress lies, even as openly and arrogantly as it did here, it usually gets away with doing so. Massie presumably lost this battle.

But there's a larger war on over the credibility of American politicians and political institutions, and if we listen to what Congress is actually saying, it just shot itself in the foot in public.

"We as individual members of Congress are far too important, and Congress itself is far too un-important, for us to be expected to do our jobs if doing our jobs entails any personal risk, or even inconvenience."

Or, to put it a different way, "we're far more important than Subway sandwich artists, and the House of Representatives isn't nearly as important as a Subway store. Our safety and comfort is paramount and the job we do isn't important enough to do right."

I'm not sure I agree with Capitol Hill's (when they bother to be there) perfumed princes and princesses as to just how very special and important they are, but I think they're onto something with the second part.

Related Topic(s): Congress; Congressman Peter King; Corona Virus Coronavirus Covid-19; House Of Representatives; Massie-Thomas; Pelosi-Nancy; Trump, Add Tags
Add to My Group(s)
Go To Commenting
The views expressed herein are the sole responsibility of the author and do not necessarily reflect those of this website or its editors.