The fact that they haven't yet been labeled a terrorist-associated group is due only to the fact that if they were, they would rain down hellfire -- and one of the mightiest propaganda and lying campaigns you've ever seen -- against those associated with having made that decision.

That, of course, is how any terrorist group worth its assault plies its trade: Scare the hell out of those who might oppose them. Let them know there will be serious consequences to those who even try, to those who even discuss it. So that anyone even thinking of it becomes crippled with fear to the point they won't do a thing to even appear to threaten the terrorists' agenda in any way.

In this case, of course, it's mostly just political terrorism. But in the real world, given the carnage they continue to enable year after year and tear after tear, it's difficult to say whether the NRA should best be described as terrorist enablers, or just plain terrorists, for the all of the indescribable violence they help perpetuate and, arguably, even help to fund.

Without the help of the NRA and those who fund them, James Holmes, the alleged gunman of Colorado's latest massacre, might not have been able to shoot nearly 70 Americans in a matter of minutes, killing 12 of them, in a sold-out movie theater just after midnight last Friday night. Neither would it have been so simple for Jared Loughner to shoot 19 Americans and kill 6 of them, including nearly murdering Rep. Gabrielle Giffords in Tucson, AZ just over a year ago, leading to her eventual resignation from Congress.

Thanks to years of terror-enabling by the National Rifle Association, both the AZ and CO sociopaths were able to maximize their rage through a maximum of carnage against their fellow citizens. And both incidents are just a drop of blood in the NRA's great American bucket.

Despite AZ and CO and the tens of thousands of deaths by firearm in this country each year, despite even coming within a hair's breadth of losing one of their own last year in the bargain, Democrats and Republicans in the U.S. Congress are unable and unwilling to lift a finger to do a damn thing about any of it. Neither is the President of the United States. They are all cowards, shriveling in abject fear of the almighty menace to sanity and common-sense and domestic tranquility that is today's NRA...

Remember, the NRA is the same organization which has been fighting for years to ensure that those on the government's "terrorist watch list," who may not even board a commercial airplane without triggering extra security scrutiny, may go out and buy any number of deadly weapons they like without even being flagged. Because, ya know, "freedom"! And if they make their purchases at a gun show, they may do so without even the need to pass a minimal criminal background check.

Thanks in no small part to the NRA, the apparent CO shooter was able to legally buy some 6,000 rounds of ammo and a 100-round drum clip for use with his semi-automatic AR-15 (which he also purchased legally), enabling him to fire on some 50 to 60 Americans per minute, according to the Aurora Police Chief left to clean up the mess. Holmes was even able to pick up 150 lbs. of ammunition from FedEx, without ever having to answer a question.

But want to buy Nicotine patches? Be prepared to have your drivers license scanned at the point of purchase.

Holmes' Friday Night "freedom," of course, was nothing short of a great victory for the NRA, which has worked for years to make sure the modest, almost entirely useless restrictions on some automatic weapons and large, multiple round magazines contained in the Brady Law (named for Ronald Reagan's Press Secretary, who was nearly killed by a would-be assassin soon after Reagan took office in 1981) would not be renewed, after those modest 10-year restrictions had sun-setted in 2004. 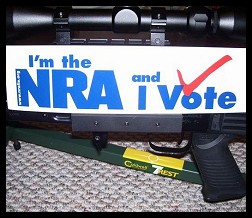 (Image by Unknown Owner)   Details   DMCA
So let's be sure to thank the NRA for all they've done for this nation through their long campaign of terror and money and lying which are all waged against any elected official or candidate for political office who even dares to display the temerity to even discuss the "well regulated" part of our 2nd Amendment. (You remember that part, right? "A well regulated militia being necessary to the security of a free state, the right of the people to keep and bear arms shall not be infringed." Did you forget that "well regulated" part? You can thank the NRA for that too. They've been working hard for years to help you do exactly that.)

Of course, one needn't discuss "well regulating" the right to bear arms, to become the victim of the NRA's Big Lies. Just ask President Obama who expanded gun rights shortly after taking office by signing a bill to allow firearms in our national parks and on trains. His thanks? Another NRA Big Lie campaign to fool more of their gullible, frightened funders into believing Obama has a secret plan to undermine the 2nd Amendment by tricking two-thirds of the U.S. Senate into ratifying a U.N. treaty that would somehow, in defiance of the U.S. Supreme Court, take precedence over the U.S. Constitution and then, naturally, allow your guns to be taken away from you!!!

And, just in case you didn't know about that particular latest Big Lie being circulated by the NRA (because all of the suckers and chumps and dupes and stooges and patsies who watch Fox "News" and receive the NRA's fundraising letters certainly know about it!) be sure to read up on how they're terrifying Americans into believing the completely phony scam about the Obama Administration agreeing to a U.N. international arms treaty which is secretly a back door way to allow them to take away your guns!!!

Despite the most recent tragic slaughter (the second mass shooting of the week, by the way, in case you hadn't heard about what happened in Alabama days earlier, as most haven't, because, ya know, "freedom" and all) it's unlikely a damned thing will be done to make such senseless killings even the tiniest bit more difficult to pull off in the future, because the NRA prefers the "rights" of the terrorists over the people, and the Congress is made up of cowards afraid to stand up to the terrorists-enablers.

As noted by my friend Cenk Uygur yesterday, "Nearly 100,000 people get shot every year. That's 270 people a day and 87 dead because of gun violence every day. That's seven Colorado shootings per day!"

Brad Friedman publishes Bradblog.com
Related Topic(s): Congressional Ethics; Firearms; Guns; NRA; Obama; Shootings, Add Tags
Add to My Group(s)
Go To Commenting
The views expressed herein are the sole responsibility of the author and do not necessarily reflect those of this website or its editors.