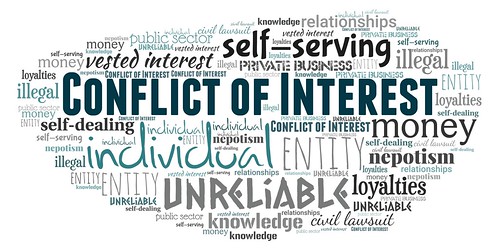 Conflict of Interest can easily be avoided.
(Image by EpicTop10.com)   Details   DMCA

A funny thing happened to Ed Diana on the way to his $500-a-week, no-show job arranged through the public industrial-development agency of the county he ran for a dozen years. He got caught.

That's the only thing that "happened" to Diana, despite what his lawyer would have you believe. Everything else he made happen.

This is a big story in Orange County, New York, which is about an hour's drive northwest from New York City, but it's about greed and political corruption, so it has implications nationwide. And yes, as with most such stories these days, it involves Republicans, but at least this time, some of them are on the right side of the law.

Diana, who served three terms as county executive in Orange, recently pleaded guilty to two counts of filing a false instrument. Specifically, he signed a form that states that, as a member of the board of directors of the Orange County IDA, as vice-chairman in fact, he had no conflict of interest with the business of that agency. That he had no tangible personal gain arising from that relationship.

In fact, though, he did. Lying on this form is a felony in New York State. Diana did it twice. He also pled guilty to a misdemeanor charge of conflict of interest.

What a load of bull, even for a lawyer in the Rudy Giuliani era.

In addition to his three times as county executive, Diana also served on the county legislature and a couple of terms as supervisor of the town of Wallkill, one of the larger towns in Orange County. Three decades of public service as an elected official in Orange County. With that experience, you should be able to smell a potential conflict of interest about three months down the road. Yet Ostrer would have us believe it could happen to "anyone."

Diana was allowed to plead guilty to avoid a prison term. He agreed to repay the IDA $90,000. He said he had been paid as a "consultant" for three-and-a-half years. In addition to Diana, the former CEO of the IDA pleaded guilty to a charge of corrupting government and agreed to re-pay $175,000 for her no-show job.

The phantom jobs were with a company owned by the former paid managing director of the IDA, whom the prosecutor said was the motivating force and worst actor in this case. He steered firms looking to do business in Orange County to his companies for equipment, planning, office space and technical assistance. Over time, he also raised the rates for the services. He pleaded guilty to corrupting government and agreed to repay $1 million. He will be on probation for five years. All three will be officially sentenced in September.

All of this "happened" while the board of directors, which other than Diana also included the chairman of the county legislature, looked the other way or napped during board meetings. Same for the board's lawyer. The county legislature fired the entire board a couple of months ago when it learned of District Attorney David Hoovler's investigation. The DA, like Diana, a Republican, said he didn't file charges against any other board members or their lawyer, because "There's no criminal liability for incompetence." Sometimes that means prosecutors can't prove intent.

Hoover pointed out that no money had been stolen, per se, and that all the monies paid to people who shouldn't have been paid had been accounted for. You say tomato, I say tomahto. People got money they shouldn't have gotten because of their positions and the money could've been used by the IDA for other purposes. In the process, the integrity of the IDA was badly damaged. As a public agency whose primary tool is the awarding of tax breaks to companies looking to locate in its county, trust is far more valuable than cash. The new Orange IDA board must work hard to rebuild that trust.

It can start by knowing that conflicts of interest don't just "happen." Not in Orange County, New York, or anywhere else. They are created. A defining feature of much of today's Republican Party, on a national level as well as at the local level, is a casual disregard for the rule of law and an arrogant disdain for the truth. That's a fact. I don't like writing it, but it's true. I think it represents a major threat to our democracy. (In this case, the current Orange County executive, also a Republican, sharply criticized the corrupt arrangement and called for the state to toughen the punishment for such crimes.)

When one of our two major parties decides it can unilaterally make up the rules as it goes along and concoct excuses to avoid responsibility, we are in serious trouble. If people will buy the big lie The election was stolen. There was no insurrection why not try a "little" one? "If this can happen to Ed Diana, it can happen to anyone."

No it can't. Witness the thousands of New Yorkers who serve on public and private boards of directors without such happenings. Of such molehills are mountains created. Lying and entitlement are addictive. So is power. The antidote is truth. Hold public officials accountable. Make them explain their actions. Trust must be earned, today more than ever.

Related Topic(s): Board Of Directors; Conflict Of Interest; Corruption; Felony; Orange County New York; Public Service; Public Trust; Republican Party; Responsibility, Add Tags
Add to My Group(s)
Go To Commenting
The views expressed herein are the sole responsibility of the author and do not necessarily reflect those of this website or its editors.