Marc Steiner: Welcome to the Real News. I'm Marc Steiner. Good to have you all with us.

It does appear from a former special ops chief, Admiral William McRaven's New York Times op-ed that called Trump, "unfit to lead," to a former Ambassador William Taylor's testimony verify the quid pro quo in Ukraine, to a former defense secretary General Jim Mattis's take down of Trump in front of television audiences that the military and diplomatic establishment see Trump as a real danger to our country.

So many might argue that Trump does threaten the established order, but why are they so concerned now? The contradictions abound from Democrats voting against Trump to remain in Syria with Republicans appearing to be anti-war all of a sudden, and/or blindly following Trump, and then watching the Democrats vote to end our support in the Saudi War against Yemen and the Houthis. What is this complex dynamic we're facing right now? What are we seeing at work in our country?

Let's attempt to parse through it all with our guest. Major Danny Sjursen is a Truthdig regular contributor, a retired US Army officer and former a history instructor at West Point and tours with reconnaissance units in Iraq and Afghanistan. He has written a memoir called" I mean, which is a critical analysis of the Iraq War called, Ghostriders of Baghdad: Soldiers, Civilians and the Myth of the Surge. He lives in Lawrence, Kansas. You can follow him on Twitter at @SkepticalVet, which he is, and check out his podcast, Fortress On The Hill. He joins us now.

He also wrote this piece that we're going to talk about today. It's called The Stunning Hypocrisy of Congress's Syria Vote that appeared today in Truthout, originally published in antiwar.com. Danny, welcome, good to have you with us.

Danny Sjursen: Oh, thanks so much for having me on, plenty to talk about.

Marc Steiner: One of the things that has really struck me here is, was McRaven's piece in The New York Times. This is where this started for me and is when I wrote to you at first about joining us here.

At the bottom of his article, he writes, "If our promises are meaningless, how would our allies ever trust us? If we can't have faith in our nation's principles, why would the men and women of this nation join the military? And if they don't join, who will protect us? If we are not the champions of the good and of the right, then who will follow us? And if no one follows us, where will the world end up? And if this president doesn't understand their importance, this president does not demonstrate the leadership that America needs both domestically and abroad, then it's time for a new person in the Oval Office, Republican, Democrat or Independent." So he says, "The fate of our republic depends on it."

And so when you compare that with this piece that we want to play for you right now that shows General Mattis blasting Trump. Let's watch this and then comment on what this all might mean. 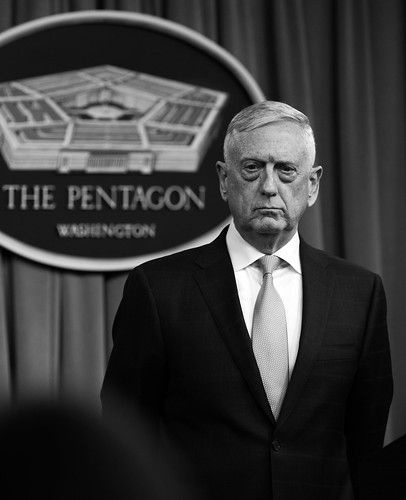 Related Topic(s): Anti-war; Syria; Trump; Trump Foreign Policy; Trump Warmonger, Add Tags
Add to My Group(s)
Go To Commenting
The views expressed herein are the sole responsibility of the author and do not necessarily reflect those of this website or its editors.