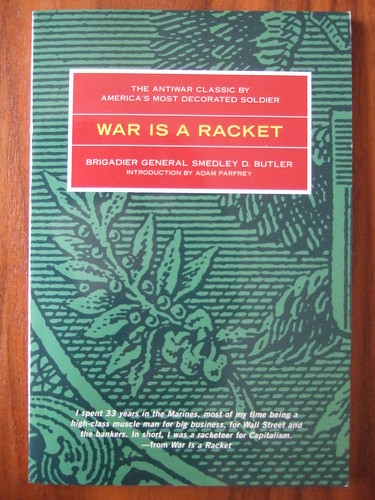 War is a racket
(Image by raulbarraltamayo)   Details   DMCA

"I helped make Haiti a decent place for the National City Bank Boys to collect revenues in."

While remembering their past has not prevented history from repeating itself, it is not possible for the descendants of the world's first successful large-scale slave revolt to forget the trauma inflicted by their northern neighbours.

One hundred and five years ago today a brutal US occupation of Haiti began. To commemorate an intervention that continues to shape that country Solidarity Que'bec Haiti is organizing a sit in in front of the US Consulate in Montreal.

On July 28, 1915 the USS Washington, with 900-men and 20 canons, docked in Port-au-Prince. US troops withdrew in 1934 but Washington largely controlled the country's finances until 1941 and the Banque de la Re'publique d'Haïti remained under US supervision until 1947.

The occupation wasn't Washington's first instance of interference in Haiti but rather consolidated its grip over the country. Six months beforehand US Marines marched on the treasury in Port-au-Prince and took the nation's entire gold reserve.

At the height, 5000 US Marines were stationed in the country of less than 3 million. US-led forces brutally suppressed a largely peasant resistance movement, killing 15,000 Haitians.

In one of many instances of overt US racism, a top commander in the occupation, Colonel Littleton (Tony) Waller, descendent of a prominent family of slaveowners, said, "I know the n-word and how to handle him."

To suppress the anti-occupation movement the US employed the nascent technique of aerial bombardment. Most of the fighting ended when rebel leader Charlemagne Peralte was killed, pinned to a door and left on a street to rot for days at the end of 1919. The US military described Peralte as the "supreme bandit of Haiti".

In a famous mea culpa, an architect of the occupation confessed he was in fact the true "gangster". Describing himself as a "high class muscle man for Big Business" and "gangster for capitalism", Marine Corps General Smedley Butler wrote in an article years later, "I helped make Haiti a decent place for the National City Bank Boys to collect revenues in."

Opposition to the occupation was fed by conscription. US authorities captured civilians and compelled them to work on public roadway, buildings and other infrastructure. One reason the Marines wanted new roads was to help them bypass rugged terrain to suppress the resistance.

During the occupation the US established a new military. Created to crush resistance to the foreign presence, the National Guard "never fought anyone but Haitians." For the next 70 years it would be used by Washington and the elite against Haiti's poor. Haiti's current government is seeking to revive that force.

In general, the occupation devastated the peasantry. Wealth extracted from the countryside was overwhelmingly channeled to infrastructure in the capital and foreign banks. The occupation spurred migration to Port-au-Prince and out of the country.

The US instigated other major changes to rural ways. In 1918 they rewrote the constitution to allow foreigners to purchase land, which had been outlawed since independence. A number of US corporations took advantage of the changes. The US controlled North Haytian Sugar Company and Haytian Pineapple Company both acquired hundreds of acres of land while the Haitian American Development Corporation, Haytian Corporation of America and Haytian Agricultural Corporation acquired tens of thousands of acres.

Toronto-based Sun Life Assurance Company initiated its operations in Haiti during this period. Canada's largest bank also benefited from the US occupation. In 1919 the Royal Bank of Canada became the second bank in Haiti. RBC hired former finance minister Louis Borno as a legal advisor and officials of the Canadian firm subsequently financed his successful presidential bid during the US occupation.

Unfortunately, Solidarity Que'bec Haiti's sit in is not only about drawing attention to a dark chapter in Haitian history. Washington retains significant influence over the country. In fact, the only reason the corrupt, repressive and illegitimate Jovenel Moïse is currently president of Haiti is due to US (and Canadian) support.

Related Topic(s): Haiti, Add Tags
Add to My Group(s)
Go To Commenting
The views expressed herein are the sole responsibility of the author and do not necessarily reflect those of this website or its editors.