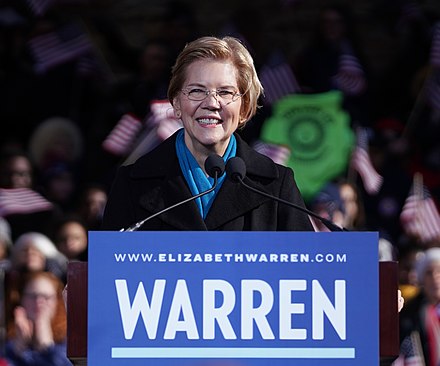 "Let's tell the truth," said Walter Mondale as he accepted the Democratic Party's 1984 presidential nomination. "It must be done, it must be done. Mr. Reagan will raise taxes, and so will I. He won't tell you. I just did."

That comment looms large in popular memory as the cause of Mondale's crushing defeat that November. Of 50 states, he carried only one, his home state of Minnesota, polling only 40.6% of votes nationwide to Ronald Reagan's 58.8%.

More than three decades later, Democratic presidential candidates continue to cower in fear of another "Mondale Moment." They tiptoe around tax issues, generally promising to raise taxes only on "the rich" and sometimes even mulling tax cuts for important voter blocs (usually a vaguely defined "middle class").

US Senator Elizabeth Warren (D-MA) has spent the last few weeks running from her own Mondale Moment, refusing to answer the straight-up question from debate moderators and interviewers:

"Would funding your Medicare For All proposal require a middle class tax increase?"

She bobs. She weaves. She clinches. She tries to change the subject. There's seemingly nothing she won't do to avoid giving a straight answer.

Why? Because the only plausible straight answer is "yes."

This is not an "anti-Medicare-For-All" column. I'm not a fan of the proposal for various reasons, but it is obviously on offer from two of the Democratic Party's three presidential front-runners. Over the next 13 months, Democratic primary voters will be, and the American electorate may be, asked to accept or reject it.

Since it IS on the table, the candidates supporting and opposing it owe those voters clear explanations of what it entails not just in terms of benefits, but costs.

According to the Urban Institute (generally regarded as a moderately "left"-leaning think tank) what it entails is an increase in federal government spending of $32 trillion over ten years.

So what we're talking about here is doubling the federal budget -- which means either doubling tax revenues or quintupling government borrowing.

There aren't enough "rich" people to cover that tab, even if Warren's other plans didn't already tap them as a significant revenue source.

Therefore, middle class and working class Americans are going to have to pay higher taxes if Medicare For All is going to happen.

Warren claims that those middle and working class Americans are going to save money anyway. Her logic is obvious: She believes that Americans' healthcare bills will go down more than their taxes go up.

Related Topic(s): 2020 Elections; Elizabeth Warren; Medicare For All; Taxes, Add Tags
Add to My Group(s)
Go To Commenting
The views expressed herein are the sole responsibility of the author and do not necessarily reflect those of this website or its editors.