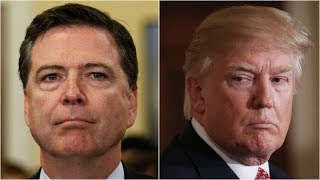 Excerpts from a new memoir by former FBI Director James Comey, leaked to the press on Thursday, have ignited a new round of attacks and counterattacks in the ongoing conflict within the US political establishment. Following Monday's FBI raid on Trump's personal lawyer Michael Cohen, the Comey book is being used by the anti-Trump faction within the ruling class and the state to escalate a months-long campaign that increasingly appears aimed at removing Trump from office.

Anti-Trump forces within the establishment are focusing more and more on sensational sexual allegations, and Trump's responses are taking on an increasingly hysterical character, exposing the depraved and anti-democratic character of American bourgeois politics. In a series of tweets posted Friday, Trump denounced Comey, whom he fired last May, as a liar and "slime ball."

The book itself is not being released to the public until Tuesday, so the leaked excerpts represent an aggressive marketing campaign that will boost sales and pump millions into Comey's own pockets. This is combined with a series of television appearances, including an hour-long interview with George Stephanopoulos of ABC scheduled for broadcast Sunday night.

Substantively, the Comey memoir apparently contains no significant revelations about Trump or his top aides and their connections to Russia or alleged Russian meddling in the 2016 elections. There is much detail on Trump's appeals for loyalty from the then-FBI director. But Comey concedes that while offensive and possibly unethical, Trump's efforts to intercede with the FBI on behalf of his closest cronies, such as fired National Security Adviser Michael Flynn, may not have been illegal.

That has not stopped the media from picking up the most salacious and degrading sections of the book and flogging them. For their part, pro-Trump media and Republican Party publicists have launched a campaign to vilify "Lyin' Comey," frequently citing Democratic criticism of Comey for his earlier actions during the 2016 campaign in relation to the Hillary Clinton email investigation.

The main focus of the press coverage is Comey's claim that Trump approached him in January 2017, at a previously reported meeting at Trump Tower, and asked him to initiate an FBI investigation to discredit the so-called Steele dossier, which includes unverified material on Trump's activities in Russia collected by a former British spy working as a contractor for the Democratic National Committee.

According to Comey, Trump was most concerned about the claim that while in Moscow on a business trip in 2013 he had hired prostitutes to urinate on themselves in the same hotel suite used by President Barack Obama "as a way of soiling the bed." He asked Comey to have the FBI disprove this claim, which he said was very painful to his wife Melania.

This is presumably the low point of the 304-page book, and the first time that a top Washington insider has wallowed in such degrading material with so much detail. Reviews of the book based on advance copies suggest that Comey returns to the subject several times, relating at least four separate requests by Trump to rebut the Steele dossier on this point.

Press accounts have also cited Comey's comparison of the atmosphere of lies and flattery surrounding Trump in the White House to that of a Mafia clan. Comey, or a ghostwriter, describes feeling "flashbacks to my earlier career as a prosecutor against the Mob."

That Trump and his inner circle resemble a corrupt mob boss and his courtiers comes as no surprise. Trump was steeped in gangsterism and corruption in the course of his many decades in New York City real estate, casino gambling, "reality" television and their many intersections with capitalist politicians of both the Democratic and Republican parties.

There is a great deal of personal animus towards Trump in the excerpts from the book made public in the media, ranging from the trivial -- the size of Trump's hands, the marks on his face and the style of his hair -- to characterizations of the president as liar-in-chief, bullying boss and, occasionally, smarmy supplicant. All this seems well calculated to meet the demands of the market for an anti-Trump diatribe, where Comey can expect a significant monetary reward.

Beyond the immediate pecuniary motives and self-justification, the Comey book is intended to become a further weapon in the campaign to destabilize the Trump administration being waged by sections of the military-intelligence apparatus and the Democratic Party. The driving force of this campaign is a deep conflict over foreign policy, particularly in relation to US policy towards Russia, both in the Middle East and more broadly.

The timing of the book's publication is remarkable from a number of standpoints. It comes during a week of intensifying crisis over Syria, with Trump threatening imminent military action against the government of Bashar al-Assad that could lead to a direct conflict with Assad's principal allies, Iran and Russia.

It is also striking that Comey has issued this volume while the investigation by Special Counsel Robert Mueller into alleged Russian interference in the US elections and possible collusion with the Trump campaign is at a critical point, following the raid on Cohen, which was based on a referral by Mueller to the US attorney for the Southern District of New York.

Patrick Martin writes for the World Socialist Website (wsws.org), a forum for socialist ideas & analysis & published by the International Committee of the Fourth International (ICFI).
Related Topic(s): Anti-trump; Comey Book; Comey Firing; Investigation; Memoir; Trump Ego, Add Tags
Add to My Group(s)
Go To Commenting
The views expressed herein are the sole responsibility of the author and do not necessarily reflect those of this website or its editors.