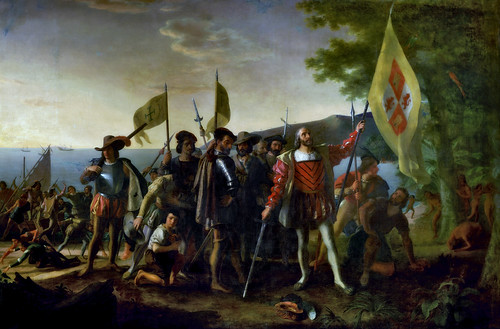 Every year most Americans celebrate and venerate a man whose life and times had very little to do with anything that he's credited with including the "discovery" of America. I have to tell you this: Christopher Columbus is no hero -- period. The sad thing is that the vast majority of Americans that celebrate "Columbus Day" each year know diddlysquat about the man. If history is a guide then he's not worthy of a national celebration and holiday. The man's no hero by any yardstick or historical measurement.

What he was and is something very different. Columbus was an incompetent ignoramus, a self-promoting opportunist and a man given to lies, brutality, and religious zealotry. In fact, his stated objective was to not only find new lands to conquer, but to convert those yet unfound and discovered "heathens" to his brand of dogmatic, rigid Eurocentric Christianity. As a white European supremacist Columbus's ideology was one of enslavement by conquest, a colonial mindset that was accompanied by rape, pillage for gain, murder, violence, enslavement and genocide. It was his white "manifest destiny" to conquer distant lands for Spain.

Born Cristobal Colon in Genoa, Italy -- he changed his name to the more sexy Christopher (meaning Christ Bearer) Columbus to find favor with the Spanish court after being laughed at by Italian royalty for his crack-pot theories. His main objectives were to convert all heathens (read indigenous peoples) to Christianity and raise enough money to reconquer the Holy City of Jerusalem -- something that underscored his religious zealotry and his delusions of grandeur.

No one knows exactly how or when Columbus came up with the grand idea of leading a sailing adventure west to find a new trade route to Asia and India. At the time, he was just a lowly trader and mapmaker in Portugal. But he was smart enough to change his social station by marrying into an aristocratic Portuguese family. In Portugal his efforts to get financing for his dream of conquering new lands and establishing a new trade route to India and Asia fell on deaf ears. For one thing the Portuguese had already established a trade route to Asia, around the southern tip of Africa. They literally laughed at Columbus. So he went to Spain where his ideas took root in a country that was busy trying to expel its former African conquerors, the Moors.

But the man was persistent. Give him that. And after eight years of lobbying, begging and badgering, his efforts finally paid off. King Ferdinand and Queen Isabella agreed to fund Columbus's expedition in 1492. He presented maps, based upon the calculations of ancient Greek philosopher Ptolemy, Marco Polo, the first European adventurer who had visited Asia hundreds of years earlier, and his own warped interpretation of the Christian Bible.

As part of the deal Columbus secured certain concessions from the Spanish king and queen including the right to govern and rule over whatever "lands" he "discovered," and a percentage (10%) of all profits received as a result of the voyage. Columbus convinced Spain to support him, although most of his geographic theories were plain dumb and crazy -- even for those unenlightened times. For example, most educated Europeans knew that the world was round, although no one expected there to be large continents blocking a western passage to Asia.

They also believed the world was about 24,000 miles in circumference, meaning 10,000 miles separated Europe's west coast from Asia's east coast (too far to sail in the small ships of the day). Columbus, using his understanding of the Bible and other spurious ancient sources, created his own version of history and reality, and argued instead that the world was much smaller. He "calculated," based on his flawed data, that Asia was only 3000 miles away. The bottom line was that Christopher Columbus was ignorant of even basic geography and he used the lack of information of the day to dupe and con his way into support of a voyage that was based on lies, ignorance and untruths.

From his very first voyage Columbus renamed the indigenous peoples that he came into contact with in the Americas. They became Indians to continue to lie to his Spanish benefactors that he'd in fact reached India and Asia. He arrogantly renamed the islands that he stumbled on that were populated with indigenous peoples for the Spanish nobility and Christian holidays days that won him high praises in Madrid. And he set in motion the first major genocide in the East that would see the indigenous peoples of the Americans and the Caribbean wiped out of existence in just about 45 years. Along with Columbus came Tuberculosis, Chicken and Small Pox, venereal diseases of all types, Typhoid, Dysentery and many other diseases that were never seen or known in this part of the world.

By his second voyage Columbus was boasting about the profitable potential of these islands. He'd over inflated the prospects of gold and silver setting in motion a mad scramble for the Americas and the Caribbean that would see the entry of untold and uncontrolled brutality. It was he who pointed out to his Spanish supporters that the indigenous peoples were easily enslaved and well suited to producing wealth for the Spanish royalty. And it was Columbus's action that would give every subsequent white crusader and conquer the rationale for their acts of barbarism and brutality. The indigenous people deserved to be enslaved and conquered because they were not civilized, not Christian and were little more than beasts walking on two feet. To make his point Columbus brought back to Spain captured indigenous people that he humiliated and paraded naked and afraid before the Spanish nobility.

Christopher Columbus was responsible for bringing the first enslaved peoples across the Atlantic. He was the first slave trader of record in the so-called New World. When Indians fought back, he responded ferociously with attack dogs and swords, killing thousands of unarmed indigenous people with impunity. Then he boasted about his exploits. Christopher Columbus died on May 20, 1506, at the age of 55. Up to his death he never realized that what he found was a new continent rather than a shorter route to India and Asia. He died a total ignoramus.

Let me end by pointing out an indisputable set of facts to those who still celebrate Columbus Day. Although born in Italy, he spent most of his life outside of that country. He also never set foot on land that would become the United States. He was a poor geographer, a cruel and incompetent administrator. Columbus held rigid, dogmatic and, even by the standards of that time, outmoded and misguided religious views.

In addition to putting the Natives to work as slaves in his gold mines, Columbus also sold sex slaves to his men--some as young as 9 years old. Columbus and his men also raided villages for sex and sport.

In the year 1500, Columbus wrote: "A hundred castellanoes are as easily obtained for a woman as for a farm, and it is very general and there are plenty of dealers who go about looking for girls; those from nine to ten are now in demand."

In the early years of Columbus' conquests there were butcher shops throughout the Caribbean where Indian bodies were sold as dog food. There was also a practice known as the montera infernal, the infernal chase, or manhunt, in which Indians were hunted by war-dogs. These dogs--that also wore armor and had been fed human flesh, were a fierce match for the Indians. Live babies were also fed to these war dogs as sport, sometimes in front of horrified parents.

Related Topic(s): America; Babies; Bible; Christianity; Dogs; Gold; History; Jerusalem; Spanish; Zealotry, Add Tags
Add to My Group(s)
Go To Commenting
The views expressed herein are the sole responsibility of the author and do not necessarily reflect those of this website or its editors.