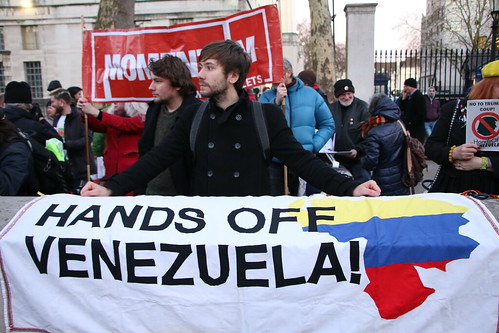 The US press has routinely abused, disrespected and lied about black, brown and yellow peoples and their heads of state, and now subjects its own top political figures to the same treatment.

"The 'news' is an element of the crime, since it is not really news at all, but a packet of false consciousness."

Common threads connect three of the week's hot news items: the quickening tempo of U.S. regime change efforts in Venezuela; Bernie Sanders' precipitous decline in the polls; and the furious corporate media assault on Medicare for All. In each of these developments we see the ruling class deploying a wide array of overt and covert forces to defeat popular movements for social justice, at home and abroad. The most direct relationship between the three stories is that most of what we know, or think we know, about these developments has been filtered and packaged by a prime accomplice in international ruling class crime: the corporate media. In that sense, the "news" is an element of the crime, since it is not really news at all, but a packet of false consciousness implanted in the consumer's brain.

In the case of Venezuela, the U.S. state, with the full backing of both U.S. corporate political parties, has for 20 years polluted the collective American consciousness with layer upon layer of lies -- lies that were dutifully transmitted and expanded upon by the corporate press. Virtually everything most Americans think they know about the governments of the late Hugo Chavez and current President Nicola's Maduro, is false. The New York Times, Reuters and all the rest of the corporate mouthpieces have cheered every attempted coup by the U.S.-backed white elite since 2002, while largely ignoring the socialist government's tremendous accomplishments in lifting millions out of poverty, illiteracy and ill health. According to former U.S. president Jimmy Carter, Venezuela conducts the fairest, most tamper-proof elections in the world, but corporate media endlessly parrot the official U.S. line that Chavez and Maduro are "authoritarians" whose elections were marked by "ballot-stuffing" and other "irregularities." Even the puppet opposition does not make such patently baseless claims inside Venezuela, but anti-Chavista lies are gospel in U.S. media, polluting the pronouncements of even leftish Democrats like Bernie Sanders and Alexandria Ocasio-Cortez.

"Everything most Americans think they know about the governments of the late Hugo Chavez and current President Nicola'sMaduro, is false."

Like a crack dealer who has succumbed to smoking his own dope, U.S. corporate media (which includes public television and radio) have come to believe the official lies they transmit. A PBS News Hour correspondent in New York was visibly dumbstruck when the latest "final stage" of Juan Guaido's coup saga failed to drive Maduro from the presidential palace. It was clear that the correspondent actually believed Secretary of State Mike Pompeo's disinformation, that Maduro and senior leaders in his government had been prepared to fly to Cuba on Tuesday morning, with "an airplane on the tarmac," and were only dissuaded from fleeing by "the Russians." At the White House, chief disinformer John Bolton spun the tale that the head of the Venezuelan supreme court and the defense minister had conspired with the commander of Maduro's presidential guard to force a transition of power to Guaido. It was a total fabrication by a hostile power, but all three Venezuelan officials felt compelled to publicly deny the disinformation and reaffirm their loyalty to the government, on Tuesday.

"Disinformation is the only language the US empire speaks."

"Normal" governments, even of great powers, usually leave the sordid business of tactical disinformation campaigns to their clandestine services. Presidents and secretaries of state only tell the "big" strategic lies that are central to Big Power foreign policy. But then, normal governments are not constantly engaged in regime change operations against multiple targeted states. Especially since 9/11, U.S. imperialism appears to have entered a stage - a permanent war-against-all -- in which disinformation is the only language it speaks, from the CIA professional specializing in destabilization in Caracas all the way up to the Oval Office in Washington. The grotesque fantasia of Iraq invasion justification; the state-induced national obsession with the "hunt" for an Osama bin-Laden whose reported exploits and whereabouts were so contradictory that most of it had to be spook-concocted fiction; and then the descent into the unspeakable, as the First Black President and his entire administration pretended that the United States was not in intimate alliance with al Qaida in Libya and Syria - a non-secret known even to the dumb-ass Donald Trump.

Finally, U.S. rulers destabilized themselves with Russiagate -- a fatal crossing. With former CIA operatives on point, one faction of the ruling class, centered in a Democratic Party swollen with corporate refugees from the now-Trumpified GOP, attempted to delegitimize a sitting president who was supported by about half the white population of the country. In the three years of intra-oligarch civil war, every rule of acceptable domestic political behavior was trashed. By labeling Trump a "dupe" or "agent" of Vladimir Putin, the Democrats gave themselves permission to treat a U.S. president the same way the U.S. treats leaders of targeted foreign countries -- short of assassination. (Trump, the rich white nationalist brat, behaves as if much of the nation is made up of unworthy "foreigners" that can be defamed and abused at will.)

"In the three years of intra-oligarch civil war called Russiagate, every rule of acceptable domestic political behavior was trashed."

In a chickens-coming-home irony that Malcolm X would appreciate, an American press that has routinely abused, disrespected and lied about black, brown and yellow peoples and their heads of state, now subjects its own top political figures to the same treatment. Corporate media are in regime change mode. Not only must Trump go, but he must not be succeeded by Bernie Sanders, who poses a different kind of threat to the corporate system. The CIA 's code of conduct applies: dirty tricks of all kinds are permitted.

Related Topic(s): Color Revolution; Corporate Media; Venezuelan Coup, Add Tags
Add to My Group(s)
Go To Commenting
The views expressed herein are the sole responsibility of the author and do not necessarily reflect those of this website or its editors.