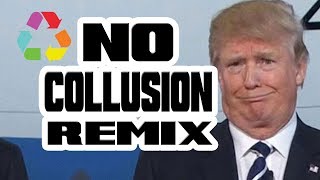 A collusion crisis. That's what the money media are facing since the Attorney General released his summary of the Special Prosecutor's report. Barr says Mueller says he found no proof of a Russia/Trump campaign conspiracy to subvert US democracy. Oh no! How are cable companies going to keep their ratings up with an audience that's collusion-hooked?

The media has no reason to worry. There's plenty of collusion in plain sight, and it wouldn't take a 22-month inquiry to find Trump conspiring with enemies of US democracy, if only the US media spent a fraction of the time they've spent covering Russia-gate looking at Trump's relationship with killer corporations and hate groups.

Let's start with the Trump administration's collusion with big business. After two deadly airplane crashes, Transportation Secretary Elaine Chao admitted to Congress this week that, as a matter of routine, the administration largely leaves aviation employees at Boeing to regulate safety standards on Boeing aircraft like the (safety-switch-optional) 737 Max.

While polls show that the majority of Americans say protection of the environment should be a priority, the Trump administration colludes with industry lobbyists to do exactly the opposite, granting, for example, nearly all the items on a wish-list drawn up by the American Petroleum Institute within Trump's first year in office.

Isn't it collusion when an administration puts at least 41 fossil fuel industry flacks in jobs where they can strip public regulations to boost private profits?

If it's collusion when it's with the Kremlin, why is it cronyism when the White House consorts with corporations to hijack the world's most powerful public office to serve (undisclosed) private interests?

The capture of government by private interests didn't start with Trump, but under him, the process is all but complete. Collusion between the administration and corporations is expansive and systematic, no matter how any one votes.

When it comes to elections, let's not forget Trump's collusion with thugs.

Fifty-five years after the Civil Rights Act, many Americans still struggle to exercise their vote. In the run up to the midterms, Trump's Justice Department demanded millions of voter records in in obvious collusion with vote suppressors in North Carolina. Suppression shrinks turnout, and so does intimidation. A new study from the University of North Texas shows a staggering 226% rise in hate crimes in counties where Trump held rallies in 2016. Reports of hate crimes are up all over the country, apparently egged on by a President who boasts of assaulting women himself and refuses to condemn rallies by white supremacists.

In New York last week, in the preliminary hearing of a man accused of defacing the African American Burial Ground with graffiti that read "Kill" followed by a racist slur, the defense attorney simply compared his client's actions to the President's. When looked at side-by-side, his argument went, his client's vandalism and hate speech were not only par for the course, but they were clearly the less serious threat.

Undermining elections? Obstructing justice? There's no shortage of evidence that the Trump administration colludes with enemies of democracy of every sort. Sad to say, he's not the first. But he could be the first to distract so many people, so long, so effectively, with a collusion chase that misses the obvious. Is it over yet?

Related Topic(s): Collusion; Corporations; Democracy; Graffiti; Media, Add Tags
Add to My Group(s)
Go To Commenting
The views expressed herein are the sole responsibility of the author and do not necessarily reflect those of this website or its editors.