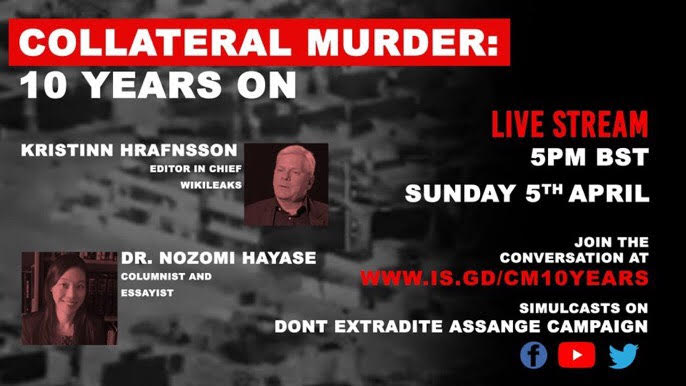 This webinar features Kristinn Hrafnsoon, the current editor-in-chief of Wikiileaks and Nozomi Hayase, author of the book: Wikileaks, the Global Fourth Estate.

I was honored to be asked to be the moderator of the webinar.

April 05, 2020 marks the 10th anniversary of the infamous WikiLeaks publication Collateral Murder video. The video shows how two Apache helicopters murdered 11 Iraqi people including two Rueters journalists. This is one of the publications Julian Assange is being indicted for espionage. He faces 175 years in a US jail if extradited.

Ann Wright is a 29-year US Army/Army Reserves veteran, a retired United States Army colonel and retired U.S. State Department official, known for her outspoken opposition to the Iraq War. She received the State Department Award for Heroism in 1997, after helping to evacuate several thousand (more...)
Related Topic(s): Assange; Collateral Murder; Video; Wikileaks, Add Tags
Add to My Group(s)
Go To Commenting
The views expressed herein are the sole responsibility of the author and do not necessarily reflect those of this website or its editors.