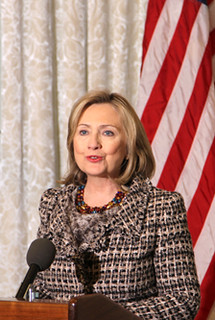 Going into the West Virginia primary, former Secretary of State Hillary Clinton has come out in opposition to a "lame duck" vote on the Trans-Pacific Partnership (TPP). This takes her beyond her previous statements mildly opposing TPP. Clinton also made a strong statement criticizing our country's trade agreements in general.

As reported in The Hill, in "Clinton opposes TPP vote in the lame-duck session," Clinton replied to a questionnaire from the Oregon Fair Trade Campaign, which consists of more than 25 labor, environmental and human rights organizations. When asked, "If elected President, would you oppose holding a vote on the TPP during the 'lame duck' session before you take office?" she replied, "I have said I oppose the TPP agreement -- and that means before and after the election."

There has been concern that TPP will come up for a vote in the lame-duck session of Congress after the election, and before the next Congress is sworn in. This special session enables votes with little accountability to the public. Members who have been voted out can vote in ways that help them get lobbying jobs and members who were re-elected with corporate money can reward their donors.

"'The Democratic candidates agree that attempting to sneak the TPP through during lame duck is completely and totally inappropriate,' said Michael Shannon, director of the Oregon Fair Trade Campaign. 'Popular opposition to job-killing trade agreements is at an all time high. The votes clearly do not exist to pass the TPP before the election, and TPP proponents' plan to try to get just-voted-out-of-office, looking-for-corporate-lobby-work Congress members to rubber stamp it after the election is something that more-and-more politicians are speaking out against.'"

The Washington Post explains, in "Clinton does not back Obama trade vote in post-election congressional session," that this will make it more difficult for President Obama to push TPP through the lame-duck session:

"Opponents of the pact said Clinton's response on the questionnaire, coming ahead of Oregon's Democratic primary on May 17, represents a more definitive statement of opposition to the 12-nation Pacific Rim accord than she has given before. It could present new hurdles for the Obama administration, which is viewing a likely brief session of Congress after the Nov. 8 election as its last chance to get the deal ratified by lawmakers before the president leaves office in January."

Clinton's statement helps, but there are still concerns about the TPP being pushed through after the election, and the administration and Republican leaders in Congress are working on this. The Washington Post again:

"White House press secretary Josh Earnest said Thursday that administration officials are in contact with Republican leaders in Congress over the timing of a potential vote.

"'The political calculation I would acknowledge is complicated. It doesn't fall cleanly along party lines,' Earnest said. 'So we're going to work in bipartisan fashion to develop a strategy that will lead to success.'"

Clinton has suffered from a credibility problem, especially on the issue of trade. Clinton made no clear statement supporting or opposing TPP during the "fast-track" fight over trade promotion authority, which "greased the skids" for the passage of TPP. Then, in October, just before the first Democratic debate, she "took the issue off the table" with a mild statement opposing TPP.

Clinton's October statement used wording that people felt left lots of wiggle room to change positions later. She said "As of today, I am not in favor of what I have learned about it." This left "as of tomorrow" open if the agreement wasn't "what she had learned." She said, "I don't believe it's going to meet the high bar I have set." This left her open to support TPP if it was changed a bit so she could claim the bar was higher. She also refused to lobby members of Congress to vote against TPP.

The mild wording left the door open for people to question her commitment and credibility. This may have been in order not to alienate the "donor class" and it may have been because she supports "free trade." The result was that not even people like the head of the Chamber of Commerce believed her, saying he was sure she would turn around and support TPP once the election was over.

Her hedged position also left her open to criticism from opposing candidate Bernie Sanders. Her surprise loss in the Michigan primary was partly attributed to her low credibility on trade issues. So Clinton strengthened her wording a bit for the Ohio and other "rust belt" primaries, but the damage was done.

Related Topic(s): Corporations; Hillary Clinton; Issues; Tpp Trans-pacific Partnership; Trade, Add Tags
Add to My Group(s)
Go To Commenting
The views expressed herein are the sole responsibility of the author and do not necessarily reflect those of this website or its editors.