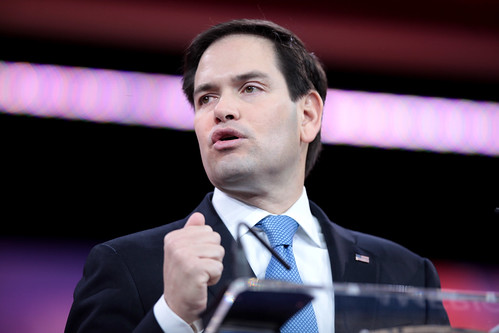 Former Republican presidential candidate and current US Sen. Marco Rubio recently weighed in on the toxic algal blooms that have caused a state of emergency in two counties in his home state of Florida.

Rubio wrote in a statement at the beginning of the month that "[The algal blooms are] a complex and painful thing to talk about and it's a very difficult thing to deal with because it doesn't have one singular cause and it doesn't have a singular project that solves it all."

And while it's true that the toxic algal blooms don't have one singular cause, Senator Rubio is completely ignoring the fact that the multiple causes are all very identifiable to anyone who is willing to actually listen to scientists.

Unfortunately, Marco Rubio has proven again and again that he's unwilling to do that.

For example, remember that one time that climate change was brought up during the Republican primary debate in Rubio's home state of Florida?

Rubio's just one of many Republicans who have taken an anti-science stance on pretty much every issue of the day.

But it's not so much that Rubio and his fellow science deniers don't actually understand the science, they're just paid off to ignore it.

In this case, it's no coincidence that Rubio is so loudly declaring that this problem is too complex to address right away.

According to The Center for Responsive Politics, over the last five years Rubio's received more than $1.6 MILLION combined from the two industries that are the biggest culprits for the algal blooms: agribusiness and the fossil fuel industry.

So... since Marco Rubio won't tell the public what's really going on, I will.

The algal blooms that are devastating Florida's tourism and fisheries have two main causes.

First, there's the huge volume of polluted fresh water that the Army Corps of Engineers is discharging from Lake Okeechobee into the Florida coast; and, second, global climate change is causing more rainfall in the area surrounding Lake Okeechobee and causing Florida's coastal waters to warm up.

The Army Corps of Engineers started draining Lake Okeechobee in February because the lake was experiencing its highest water levels in nearly a century as a result of record rainfall.

But Senator Rubio isn't just wrong about climate change, he also seems to think that he understands hydrology better than the Army Corps of Engineers, because he's asked the Army Corps to stop discharging that water from Lake Okeechobee.

Related Topic(s): Algae; Climate Change; Marco Rubio; Toxic Dump, Add Tags
Add to My Group(s)
Go To Commenting
The views expressed herein are the sole responsibility of the author and do not necessarily reflect those of this website or its editors.