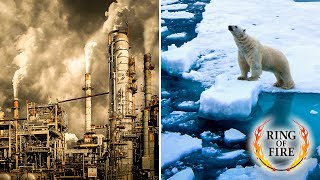 I could not possibly applaud enough the young men and women who flooded the streets in hundreds of cities around the world demanding their governments take immediate and long-term action to combat climate change. By the same token, I could not condemn and denounce more vehemently Mr. Trump and many of his ilk, like Bolsonaro of Brazil, for their criminal disregard of the catastrophic peril that climate change represents. By denying the threat that climate change poses and its devastating harm to countless living creatures, they are systematically undermining any chance we still have of avoiding a terrible catastrophe, including a mass extinction of species the likes of which the modern world has never seen.

On Monday, the United Nations Climate Action Summit, revealed how far presidents and prime ministers are willing to go. More than 60 countries announced tangible plans to reduce emissions and help the countries most vulnerable to climate change to manage the terrible consequences of global warming.

Yet, since the beginning of his administration, Trump has been undermining environmental protections; by his withdrawal from the Paris Climate Change agreement, his refusal to attend the G7 special meeting on climate change, cut backs on the regulation of methane emissions, the freezing of antipollution and fuel-efficiency standards for cars, weakening the Endangered Species Act, while allowing gas drilling and offshore oil in all coastal waters off the United States.
Michael E. Mann, a noted climatologist and geophysicist, has observed that the science he and his colleagues does is "a threat to the world's most powerful and wealthiest special interests." This explains the self-serving denials of people like Trump and his company, who choose to ignore that a disastrous climate crisis is looming.

To have a better understanding of the unfolding disasters precipitated by climate change, the following are not new revelations but point out some of the far-reaching implications of climate change that no country can afford to overlook.
The rainforests are a crucial bulwark against climate change because they act as a carbon sink, absorbing carbine dioxide out of the atmosphere. The rampant deforestation that is occurring in the Amazon and elsewhere (including Indonesia, Thailand and the Democratic Republic of the Congo) is effectively eliminating one of the most powerful resources we have for combatting global warming.

When Brazilian president Jair Bolsonaro was elected in October 2018, he came to power intending to open up the Amazon basin to business interests. He cut the budget of Brazil's environmental enforcement agency by $23 million, and essentially encouraged cattlemen, agribusinesses and loggers to exploit and deforest an ever-growing amount of Amazon land. Small wonder then that fires in Brazil are up 85 percent this year compared to the previous year.

Although it is certainly a good thing that European leaders recognize the calamity resulting from the burning of the Amazon rainforest, the pathetic $20 million they have allocated for fighting these fires is a paltry sum considering the enormity of the disaster. This sum of money does not match the urgency expressed by the G7 leaders -- do they really understand the magnitude of the disaster which is unfolding in front of our eyes? Presently, an area about one and a half times the size of a football field is being destroyed each and every minute of each and every day.

The systematic destruction of the rainforest is not limited to Brazil. The Democratic Republic of the Congo has seen a loss of roughly 1,200 sq. miles of forest every year since 1990. That is a forest area around the size of Delaware which is destroyed annually. The rainforest in the Congo Basin is the largest in Africa, and second only to the Amazon Basin in size.

Many of the wildlife species are threatened by illegal logging, including the lowland gorillas and chimpanzees. Forest elephants have seen their numbers decline by 60 percent.

War, ethnic conflicts, deteriorating economies, and climate change have forced millions across the world to flee their homes. Over 1.6 million migrants and refugees reached Europe between 2015 and 2018 from Asia, Africa and Middle East. Tragically, climate refugees and internally displaced persons are just another facet of this crisis.

Climate refugees are people forced to leave their homes due to "sudden or gradual alterations in their natural environment." The most vulnerable regions are sub-Saharan Africa, South Asia and Latin America; studies show that by 2050, nearly 150 million people from these regions could be displaced due to climate change.

Coral reefs are also dying at a horrifying rate as a result of global warming -- 27 percent of monitored reefs have been lost and over 30 percent are at risk of being lost within the next few decades. The reasons for this unfolding tragedy are clear enough. Coral mining, overfishing, blast fishing, pollution, warming oceans and ocean acidification are among the major contributing factors.

Sylvia Earle, a notable marine biologist and former chief scientist of the National Oceanic and Atmospheric Association pointedly observed that, "Half the coral reefs are still in pretty good shape, a jeweled belt around the middle of the planet. There's still time, but not a lot, to turn things around."

Factory farming is contributing directly to global warming. Over 60 billion animals worldwide including cows, chickens and pigs are restricted to Confined Animal Feeding Operations (CAFOs). These CAFOs release massive amounts of greenhouse gasses, surpassing even the entire global transportation industry. According to the Food and Agriculture Organization of the United Nations animal agriculture is responsible for 18 percent -- nearly one-fifth of all human-induced greenhouse gas emissions.

Related Topic(s): Catastrophe; Climate Crisis; Methane; Pollution; Rainforest; Worldwide, Add Tags
Add to My Group(s)
Go To Commenting
The views expressed herein are the sole responsibility of the author and do not necessarily reflect those of this website or its editors.