"We must stop being the stupid party. I'm serious." -- Bobby Jindal 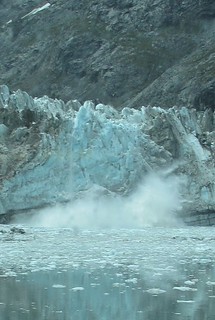 Glacier Collapse
(Image by kyle simourd)   Details   DMCA
Louisiana's Governor Jindal may have been totally "serious" in his warning to the Republican National Committee gathered for a post mortem on Romney's loss to Obama in 2012, but his party paid no heed. Instead it has embraced stupidity with renewed passion as it parades toward the 2016 election.

The stupidity Jindal spoke of is not low intelligence or IQ, but rather the choice not to use what intelligence and knowledge we have. It is willful stupidity. One of its most dangerous manifestations is climate change denialism--the refusal to accept that rising global temperatures caused by emissions of greenhouse gases are a growing threat to human well-being and national security.

On one side we have the voice of science: "Based on well-established evidence, about 97% of climate scientists have concluded that human-caused climate change is happening" (American Association for the Advancement of Science, 2014 ). The national science academies of the United States, Canada, Britain, Germany and seven other nations issued in 2005 a joint warning about the dangers of human-caused climate change, and called for preventive measures.

The U.S. Department of Defense (DOD) is trying to prepare. Its 2014 Climate Change Adaptation Road Map is clear: "While scientists are converging toward consensus on future climate projections, uncertainty remains. But this cannot be an excuse for delaying action."

This document echoes the concerns of scientists world-wide about such disturbing facts as rising global temperature and increasing frequency of extreme weather. Accelerated melting of glaciers, and of sea ice and ice sheets in polar regions are causing sea levels to rise. The World Bank projects that in ten years "at least 65 percent of city dwellers on each continent" will reside in vulnerable low-elevation coastal zones.

According to the DOD, "In places like the Hampton Roads region in Virginia, which houses the largest concentration of US military sites in the world, we see recurrent flooding today, and we are beginning work to address a projected sea-level rise of 1.5 feet over the next 20 to 50 years."

On the other side, a Republican peanut gallery tries to drown out all these warnings with a chorus of "I'm not a scientist, but. . . ." In an August 11 survey by NPR, only 2 GOP presidential candidates (Jindal and Graham) were willing to say they would do something about global warming if elected.

The most prominent and ardent denier is Sen. James Inhofe (R-Oklahoma), whom Republicans have elected chair of the crucial Senate Environment and Public Works Committee. He regards human-caused global warming as "the greatest hoax ever perpetrated on the American people." On a very cold day in February this intellectual giant of the GOP caucus threw a snowball onto the Senate floor as a proof against global warming.

On Sen. Inhofe's committee 10 of the 11 Republican members are deniers , as are 13 of 21 Republican members of the House Committee on Science, Space and Technology. Last year, Senate Majority Leader Mitch McConnell (R-Kentucky) shrugged off global warming with this deceit: "Each side has their scientists." House Speaker John Boehner (R-OH) answers questions about the climate with the same dodge.

In "The Madness of Miami Beach" (The Guardian , 3/10/15) Robin McKie describes the early stages of a catastrophe overtaking this famous resort city and threatening much of South Florida. During spring and autumn, tidal surges cause seawater to pour into the city's storm drains and up onto the streets where it corrodes cars parked at ground level and flows into houses and stores. The city has budgeted $1.5 billion for flood control.

If a "sea-level rise of 1.5 feet over the next 20 to 50 years" occurs as projected by the DOD, the result will be disastrous for the entire Miami area. According to Philip Stoddard, mayor of South Miami, "Another foot of sea-level rise will be enough to bring salt water into our fresh water supplies and our sewage system. Those services will be lost when that happens."

McKie used the word "madness" in the title of his article because he was struck by how much money is pouring into Miami Beach for new apartment blocks and shopping malls, ignoring "scientists' warnings that the foundations of their buildings may be awash very soon." The climate denialism of Florida's senior GOP politicians--Jeb Bush, Marco Rubio and Gov. Rick Scott--encourages this madness.

According to the Miami Herald ( 3/8/15 ), when Gov. Rick Scott took office in 2011, employees of the Florida Department of Environmental Protection were warned not to use the phrases "global warming," "climate change" and "sea-level rise." This foolishness contrasts with the grown-up thinking of U.S. military planners:

"Uncertainty does not preclude action. . . . For many predictions of temperature and sea level rise, uncertainty exists regarding the rate, magnitude, and local manifestation of change; however, virtually all predictions agree on the direction of change: that the future will be warmer and that sea levels will rise" (Assessing Impacts, 1/13).

Related Topic(s): 2012; Catastrophe; Climate; Environment; Flooding; Future; Hoax; McConnell-Mitch; Military; Predictions; (more...) Republican; STUPIDITY; Science; Security; Senate; Weather, Add Tags  (less...)
Add to My Group(s)
Go To Commenting
The views expressed herein are the sole responsibility of the author and do not necessarily reflect those of this website or its editors.