"People can't get that image of George Floyd having the life choked out of him by a police officer, who was supposed to protect and serve our community. But this also is a reminder that we are living in a country that has truly, for a long time, brutalized African-Americans, from slavery, to lynching, to Jim Crow, to mass incarceration, and now to police brutality. And, in Minneapolis, where we have of the worst racial disparities, people are also understanding that there has been severe social and economic neglect in our communities. And so we have real work to do to heal, to begin to rebuild, and to figure out a system that works for all of us." 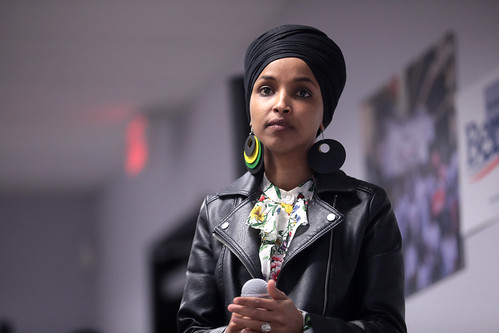 Omar has been the U.S. Representative for Minnesota's 5th congressional distric t, which includes Minneapolis, since 2019. She is the first Somali-American, the first naturalized citizen from Africa, and the first woman of color to hold elective office from Minnesota.

How can we start? Michael Crawford, MoveOn's Cultural Director, offers some ideas:

I am a Black man, and, like George Floyd, I grew up in Houston. I've seen with my own eyes how Black people, especially those of us who live in poor communities, are treated and mistreated by police officers who have sworn to "protect and serve."

The murder of Mr. Floyd wasn't an isolated incident. In fact, it's not the only police killing of Black people in recent months. The cases are too many to name, and they include these:

This is far from the first time we've been at this crossroads as a nation. No matter what you have done before-- if you've been in the streets demanding justice for Black lives or if you are just now feeling the urgency to do your part to correct this injustice-- there is a place for you now.

There are no easy answers, as is usually the case when we're confronted with racist policies that have metastasized into a system that dehumanizes Black people and values our lives less than white lives. The police killings of Mr. Floyd, Ms. Taylor, and Mr. McDade are part of a history of violence against Black people that is as old as America itself, and it won't be solved with one petition, one tweet, or one statement by a politician.

All across the country, hundreds of thousands of people are taking to the streets in powerful ways. Not everyone can protest in-person in this moment with the continuing threats of the coronavirus pandemic and police violence. The only person who can decide your risk level is you.

If you are looking for ways to take action from home, here are a few suggestions from MoveOn staff of concrete actions you can take:

If you do decide to take part in street protest to demand justice for George Floyd, here are some resources that will help you stay as safe as possible:

"The murder of George Floyd in my district is not a one-off event. We cannot fully right these wrongs until we admit we have a problem. As the People's House, the House of Representatives must acknowledge these historical injustices and call for a comprehensive solution. There are many steps on the path to justice, but we must begin to take them."

Related Topic(s): African-americans; Black Lives Matter; Civil Rights; Civil Rights Movement; George Floyd; Moveon; Murder, Add Tags
Add to My Group(s)
Go To Commenting
The views expressed herein are the sole responsibility of the author and do not necessarily reflect those of this website or its editors.