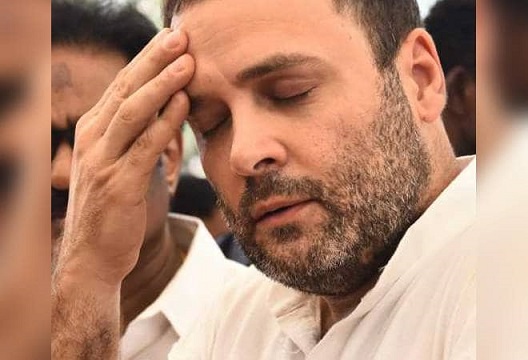 Please don't move on only because the Supreme Court has dismissed a "fake" petition stating that Rahul Gandhi has been a British citizen in the past. The matter is hot as coal.

Why do I call it a "fake petition"? Use your brains. The Supreme Court order states "we cannot rely on a paper note to call Rahul a British citizen." Why would anyone go to court with just a few lines scribbled on a "paper note"? I mean no backgrounder, no facts, no arguments put forth? Petitioners Jai Bhagwan Goyal and CP Tyagi might have been driven by nationalist spirit but like poor surgeons picked up cucumber instead of a scalpel to dissect their object.

But let's not waste our energy on this sideshow. Let's look at the ground reality and why I say it's hot as coal. Congress President Rahul Gandhi has to reply to a letter by Ministry of Human Affairs (MHA) by next week (May 16) on his alleged British citizenship in the past. The MHA is acting on the basis of a letter by Dr. Subramanian Swamy in this regard. Dr. Swamy, the bete noire of Gandhi dynasty has done more than just scrawl a letterhe has a petition pending in the Supreme Court on the matter.

So what should Rahul Gandhi say in his reply to MHA?

Assuming he says YES, he indeed was a British citizen in the past. It would open up a can of worms. How could he then have been an Indian citizen, a Member of Parliament and at a cruder level, does it imply that he was staying in India without a valid visa? And does for violations of visa regulations, a jail-term looms?

Assuming he says NO in reply, did he seek FCRA (Foreign Contributions Regulations Act, 2010) clearance from the relevant authorities? If not, isn't it a misrepresentation/hiding facts in his election affidavit? Can't it be termed as money-laundering done through a foreign company?

No wonder Dr. Swamy chuckles at the prospects of Rahul Gandhi's impending reply. He has tweeted: "Buddhu is in a classic Catch 22 situation and between a rock and a hard place."

So please don't be lulled into believing that the Supreme Court, in dismissing the "fake" petition, has also given a verdict on MHA and Dr. Swamy's efforts to get to the bottom of the truth.

Typical of Lutyens Media though in drooling on the verdict in favour of their patrons. Shreya Dhoundial, an anchor with CNN News 18, pressed the buzzer in no time in declaring that SC has junked Dr Swamy's petition on Rahul Gandhi's nationality. But the CNN News18 anchor and her fraternity in Lutyens Media in their eagernessmost had the news on their front pages todaymissed a very critical point in their coverage.

And the point is that neither Congress nor Rahul Gandhi nor for that matter his master's voices in Randeep Surjewala and Sanjay Jha have made a single tweet in celebration of Supreme Court ruling. I mean, come on, the Congress camp had a very good opportunity of rubbing BJP's nose on the ground. Why let go of the moment? Doesn't their silence speak of the tremors under their feet?

Yes, Rahul Gandhi's British citizenship issue isn't dying any soon. You can read the entire background to his alleged association with a British company here. I am not a clairvoyant but my guess is he would miss the deadline of MHA letter or submit a blank page in response. By then, the 2019 General Elections would have only one phase (May 19) of polling left. As they say: A drowning man would clasp even at a straw.

Related Topic(s): Citizenship; Election; Media; Parliament; Petition; Tweet, Add Tags
Add to My Group(s)
Go To Commenting
The views expressed herein are the sole responsibility of the author and do not necessarily reflect those of this website or its editors.