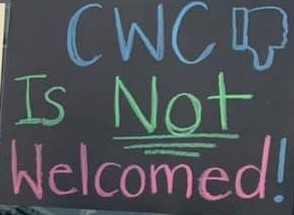 Sign at protest against CWC's co-location plans.
(Image by Save Shirley Elementary)   Details   DMCA
From the beginning, the neighborhood did not need another school while other schools in the community remained under-enrolled. The school's finances were an "abomination," and the leadership was ill-equipped to oversee the schools.

The charter school industry claims as a marketing point that they have long waiting lists and that this justifies their continued expansion. As an example, Citizens of the World Charter Schools (CWC) states on their web site that their "schools are in strong demand" and that "in 2015, [they] had 10 times more interest than space." Since these waiting lists are not made public and are not independently audited, there is no way to verify the actual number of students on these lists or to gauge the interest level. However, it does seem strange that a school like CWC, which supposedly needs ten times more space than they have accessible, would also be charged $966,915.74 for space they demanded from the Los Angeles Unified School District (LAUSD) but did not use during the last three fiscal years. Each of their three Los Angeles campuses had fewer students than they projected in at least one of the past three years.

When CWC expanded into New York City in 2013, its Williamsburg campus opened with less than 75% of the students it originally projected "and the state placed it on probation." To recruit students, the charter school targeted "middle/upper income, predominantly white" families while taking space from a school whose students were from predominantly low income, minority families. From the moment the expansion was announced it created "friction with [the] community" that included a lawsuit alleging "that co-location with JHS 156 and Northside Charter School would deprive the other institutions of resources and space."

Once in operation, it appears that CWC attempted to push out students who did not fit its needs. During its first year, the two campuses suspended 23 Kindergarteners and three first graders. This is indicative of policies that do not support children in need of behavioral interventions or have other special education needs, which could include autism. The number of students referred to the office at the Crown Heights campus was 3.5 times the number of students enrolled at the school.

In four years of operation, CWC "struggled with leadership turnover at their regional office and within the schools themselves." They also showed few "signs of academic promise" and were "some of the lowest-performing schools authorized by SUNY" (State University of New York). "Roughly one in five students passed the math or English state test". Facing a rejection of their renewal applications, the schools instead shut down, retreating from the country's largest school district.

During the same year that CWC started its ill-fated expansion into New York City, they also commandeered space at Stoner Elementary School in Culver City, California. This co-location "was marked by arguments and acrimony" that included actual "scuffles between parents" and "physical, conflict". Even with this conflict, they publicly stated that they wanted to take even more space from the public school. However, they neglected to officially notify the district before the deadline and instead forced their way on to two other LAUSD campuses. Today the school houses part of their student body at Daniel Webster Middle School.

While CWC says that their "school is an effective working model of the larger society students will someday join", their demographics tell a different story. After all, it is difficult to create "meaningful school experiences that build cross-cultural understanding and tolerance" when they are stealing space from a public school whose student body looks much different than their own. Like many other charter schools, CWC falls behind public schools in serving students with special education needs. At the Mar Vista campuses, only 8.8% of the students have these needs. At Daniel Webster, 23.8% do. For the charter school, a quarter of the students are socioeconomically disadvantaged, while at the public school on the same campus, 86.8% are.

The Shirley Avenue Elementary School community has been appealing to CWC to pull their demand for space from this public school campus. Unfortunately, history seems to indicate Shirley will have little success. It is, therefore, up to the board of education to step in and advocate for the 80% of students who attend district schools. This is what they were elected to do.

Carl Petersen is a parent, an advocate for students with special education needs, an elected member of the Northridge East Neighborhood Council, and a member of theLAUSD's CAC, and was a Green Party candidate in LAUSD's District 2 School Board race. During the campaign, he was endorsed by the Network for Public Education (NPE) Action and Dr. Diane Ravitch called him a "strong supporter of public schools." His past blogs can be found at www.ChangeTheLAUSD.com. Opinions are his own."