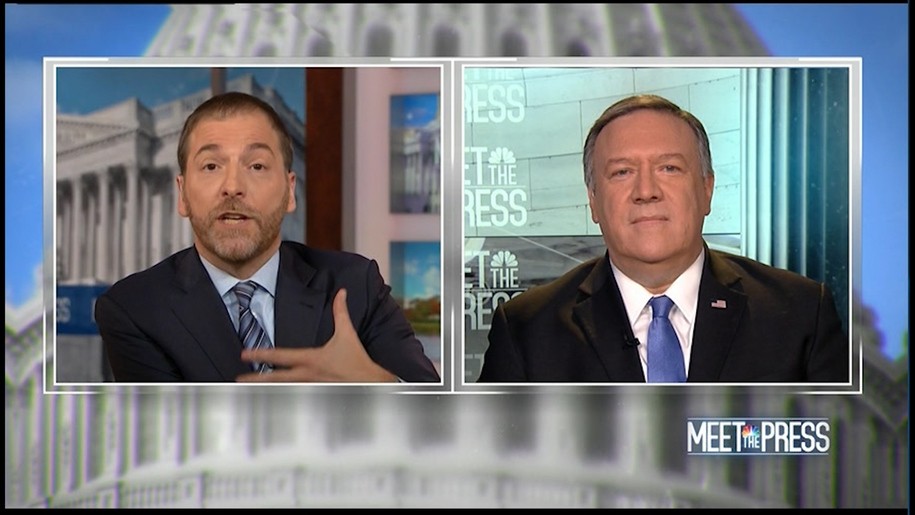 Chuck Todd asked the right questions today of Secretary of State Mike Pompeo. I isolated the portion of whether Americans are safer because of its importance. Listen to the answer and decode. This is a political fraud that will get many killed.

Chuck Todd asked Mike Pompeo if he can confidently say America is safer today. It was a good catch question to show the Secretary of State for the fraud he represents.

Todd then went in for the kill.

"How do you square that statement with the fact that you're advising American citizens essentially to leave the region if -- particularly Iraq?" Todd asked. "We have the Homeland Security Department bracing Americans for cyberattacks, saying that, 'We know the Iranians had been through our infrastructure. It is likely to happen, and there won't be a warning from it.' It doesn't sound like we're safer today after this."

The Trump administration have put the lives of thousands if not millions of Americans at risk. It was a measure that he need not have taken to keep America safe. This destabilization simply provides a rationale for terrorist attacks against Americans throughout the world.

No one should doubt that the military-industrial complex is salivating. One can imagine the contributions they will be sending to those candidates supporting our warmongering stance.

Related Topic(s): Chuck Todd; Secretary Of State Mike Pompeo, Add Tags
Add to My Group(s)
Go To Commenting
The views expressed herein are the sole responsibility of the author and do not necessarily reflect those of this website or its editors.