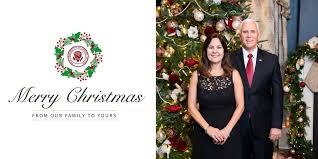 Last Sunday, I offered an Advent reflection on the long history of what Chilean scripture scholar, Pablo Richard, has called "the battle of the gods" that is mirrored in the biblical texts themselves. It's a battle of the God of the Rich (like David and Solomon) against the God of the poor (like Yeshua himself).

Or as OpEdNews (OEN) editor-in-chief, Rob Kall reminded me: it's a struggle between what I had previously called the small, exclusive, national god of empire versus the big all-embracing God of prophets both ancient and contemporary - like Gandhi, King, Badshah Kahn, and Dorothy Day. That Big God cares especially for the poor who happen to constitute the vast majority of people in the world. That deity's spokespersons have harsh words for the rich.

Apropos of all that, just three days before Christmas, Vice President Mike Pence, a self-proclaimed and especially fervent follower of Jesus, gave a revealing speech at a Turning Point USA event in West Palm Beach Florida. (Turning Point is a Republican group claiming a membership of more than 250,000 conservative students across 2000 U.S. campuses.) There, in terms lauding the Trump administration, Pence defended the small god of the rich - a national god who stands on the side of the wealthy. More than once, his audience enthusiastically responded "USA, USA, USA" as if our country's borders constituted the full swath of divine concern.

In the course of his speech, Mr. Pence complained that his party's opponents ". . . want to make rich people poor, and poor people more comfortable."

Connecting his words specifically with Christmas, the vice-president urged his young audience to "take a moment to be still, and if you're inclined, this is what we do at my house come Christmas morning, take a moment to reflect on the grace that came to mankind, wrapped in clothes (sic) and lying in a manger so many years ago."

Though Mr. Pence's words correctly invite us to reflect on what came to us in that manger so many years ago, they expressly contradict the God revealed in the original Christmas event - especially in relation to socialism and treatment of the poor.

The contradiction becomes clear from consideration of the fundamental Christian belief celebrated across the world during the Christmas winter festival. It's the belief that God elected to disclose divine reality precisely in conditions of extreme poverty. The revelation came in the child of poor parents who had been forced into a long dangerous journey for purposes of taxation by a hated imperial government in the dead of winter. Of course, we're talking about the Jewish family from hovel-filled Nazareth, Yosef, Miryam, and their firstborn, Yeshua.

(Note that according to the belief in question, everything the God does is revelatory. So, it is significant in itself that the divine revelation did not take place in a palace, a temple, nor among wealthy aristocrats. Instead, it took place in a smelly, vermin infested barn where the child's parents - too poor to pay for a hotel and refused lodging by locals - were compelled to give birth in dangerous extremely unsanitary conditions.)

Moreover, according to the story, the child in question:

Even more to the point and according to his own description, the entire point of Yeshua's life's work was to alleviate poverty. Quoting his people's revered prophet Isaiah, here's the way he described his very program in Luke 4: 16-22: "The Spirit of the Lord is on me, because he has anointed me to proclaim good news to the poor. He has sent me to proclaim freedom for the prisoners and recovery of sight for the blind, to set the oppressed free, and proclaim the year of the Lord's favor."

Please note that those words identify God's Self - God's very Spirit - as essentially concerned with the poor, with those blind to poverty's existence, with the sick, with prisoners and the oppressed. As Michael Hudson has pointed out in his magisterial . . . And Forgive Them Their Debts, Yeshua's "good news" (his gospel) was about cancelling the loans of the heavily indebted peasants in the Master's audience. As he said specifically, it was essentially about wealth redistribution (Luke 18: 22, 23, 28-30). No wonder he was so popular with those living on the edge.

Related Topic(s): Christmas; Debt; God; Jesus; Mike Pence; OpEdNews; Poverty; Prophet; Republican; Socialism; (more...) Trump, Add Tags  (less...)
Add to My Group(s)
Go To Commenting
The views expressed herein are the sole responsibility of the author and do not necessarily reflect those of this website or its editors.