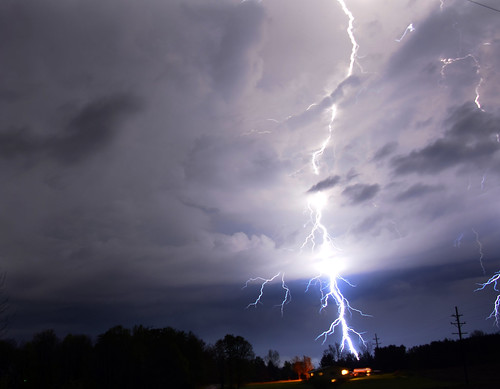 The wrath of god?
(Image by gerrybuckel)   Details   DMCA

On Christmas Eve the office of the Brazilian comedy troupe Porta dos Fundos was attacked by three people throwing Molotov cocktails, in a hope to burn down the office. Whoever committed the attack failed, as a security guard was able to put out the fire. Security video of the attack was given to authorities.

A Fascist group, that is modeled on the Fascist Party of 1930s Italy, known as Command of Popular National Insurgence has claimed responsibility for the attack. It's members are upset with the comedy troupe's current film that is being aired on Netflix, The First Temptation of Christ, which insinuates that Jesus was gay. And they are probably also angry with an earlier film the comedy troupe did called The Last Hangover, which is a spoof on the Last Supper Bible story. Regarding The First Temptation of Christ, Christians obtained over two million signatures on a petition demanding that authorities ban the film.

To Christians who believe the Bible is the Word of God, gay people are seen as an abomination (Leviticus 18:22) and that Bible believers, both Jews and Christians, should kill gay men, per a command allegedly from God (Leviticus 20:13). And as all Christians should know, but few do, Jesus did not come to do away with the cruel and ungodly commands of the Hebrew Bible/Old Testament. Matthew 5:17-18 says that Jesus said (Jesus, IF he really did exist as a mere mortal, did not write anything himself, so all there is to go on is hearsay from the anonymous authors of the Gospels), "Think not that I am come to destroy the law, or the prophets: I am not come to destroy, but to fulfil. For verily I say unto you, Till heaven and earth pass, one jot or one tittle shall in no wise pass from the law, till all be fulfilled." This is a statement by a delusional religious fanatic who believed Jesus was going to fulfill Hebrew Bible prophecies which would cause heaven and Earth to pass. That did not happen. Heaven and Earth are still here, so, based on these words attributed to Jesus, the brutal Hebrew Bible/Old Testament commands are still in place.

The mentality displayed by the Christians, that of demanding the film be banned and using violence to attack the office of the offending comedy troupe, is a mentality Christianity, and all of the "revealed" religions, have had on clear display from their very beginnings. Blasphemy rules and laws, which all of the man-made "revealed" religions embrace, are designed to stifle our innate God-given reason and to stop the free exchange of ideas, as is religious violence. Two examples of Christian ignorance, hate and violence used to silence opposition to Christianity are found in Giordano Bruno and Cayetano Ripoll, who both paid the ultimate price. Bruno was burned alive by the Italian Inquisition on February 15, 1600 and Ripoll was hanged for being a Deist and for teaching other people about Deism by the Spanish Inquisition on July 26, 1826.

The way Christianity is portrayed in the mainstream media, it's not surprising that most people believe Jesus was all about love and peace (IF he ever really did exist). This is not true. Although many Bible verses do portray Jesus as being all about love and peace, many others do not. For example Luke 14:26, in which the anonymous author of this gospel says that Jesus said, "If any man come to me, and hate not his father, and mother, and wife, and children, and brethren, and sisters, yea, and his own life also, he cannot be my disciple." It's disgusting that someone who is not only allegedly representing God, but portrayed as being the Son of God, would teach people to hate their families and to hate the gift God gave them of life.

Add to this hate promoting teaching from the anonymous Gospel of Luke, this violence promoting teaching from the anonymous Gospel of Matthew. Matthew 10:34 says that Jesus said, "Think not that I am come to send peace on earth: I came not to send peace, but a sword." I would bet that this is one of the most popular Bible verses with the Command of Popular National Insurgence.

The Bible teachings that portray Jesus as promoting love and peace are in direct conflict with Bible teachings like the two examples above. This fact points out the profound ambiguity of the Bible. In a letter to a friend who was criticizing Thomas Paine's book The Age of Reason (the letter Paine wrote in answer to his friend's criticism is in The Age of Reason, The Complete Edition), Paine responded:

"In your letter of the twentieth of March, you give me several quotations from the Bible, which you call the Word of God, to show me that my opinions on religion are wrong, and I could give you as many, from the same book to show that yours are not right; consequently, then, the Bible decides nothing, because it decides any way, and every way, one chooses to make it."

The ambiguity of the Bible which Paine pointed out is what allowed the Confederacy in the US Civil War to justify slavery, while it allowed the Union to denounce slavery.

If we truly want to bring an end to religious hate and violence, we must use our gift from God of innate reason. We must point out to those who are currently under the influence of a "revealed" religion the truly good news and fact, that the Creator gave us reason and not any of the religions. This will spark doubt in the minds of many, if not most, of them. Doubt leads to the questioning of what they have been taught. This triggers independent thought and reasoning. This entire process often leads to people finally breaking free of the fear-based religions and "holy" books and valuing and using their God-given reason. This can only make for better lives for the individuals and a better society for everyone.

Bob Johnson is a paralegal and a freelance writer in Florida. He was raised Roman Catholic, but after reading Thomas Paine's The Age of Reason, he became a Deist. In 1993 he founded the World Union of Deists and in 1996 he launched the first web (more...)
Related Topic(s): Bible; Christian Taliban; Christianity; Conflict; Deism; God; Peace; Peace; People; Religion; (more...) Violence, Add Tags  (less...)
Add to My Group(s)
Go To Commenting
The views expressed herein are the sole responsibility of the author and do not necessarily reflect those of this website or its editors.