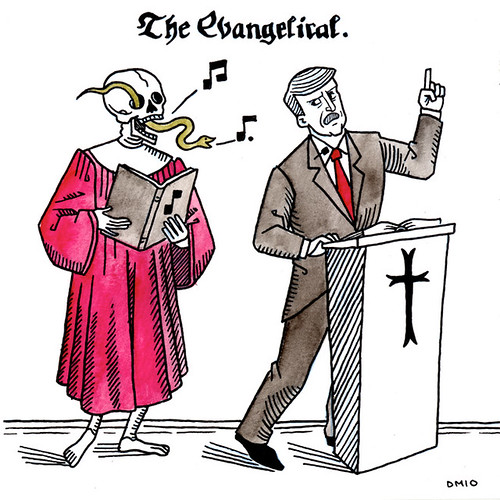 The reactionary Christian ideology that's driving support for the U.S.-Israel imperialist alliance, and that's facilitating a campaign of internal inquisition against the opponents of capitalism and colonialism, is based on an utterly nihilistic view of social and economic systems. Just look at the Christian argument for why the Israeli occupation of Palestine should continue. Half of evangelicals support Israel mainly because they believe the existence of a Zionist state is crucial to fulfilling the Biblical end-times prophecy, where an apocalyptic war gets started that prompts Jesus Christ to return and bring the worthy up to Heaven.

The human costs of Washington's propping up this state--which for the last century has been forcibly displacing the Arabs, carrying out campaigns of deliberate starvation to make way for Zionist settlements, and wantonly brutalizing unarmed Palestinian demonstrators for terroristic purposes--are all negated under this rationale. As is all the other death and destruction that Zionism's Washington imperialist backers are facilitating.

Among these evangelicals, support for capitalism is viewed as just as crucial for the advancement of Christ. In One Nation Under God: How Corporate America Invented Christian America, Kevin Kruse lays out how since the middle of the last century, bourgeois propagandists have been promoting the idea that deference to private industry is a vital part of being Christian. This narrative about God wanting "free enterprise" to succeed continues to be proliferated by preachers like Joel Osteen, who promotes the "Prosperity Gospel" with its claim that God wants the rich to be rich.

The catastrophic consequences of neoliberal policies, which have needlessly caused well over 100 million people worldwide to be pushed into extreme poverty during the pandemic alone and have made it so that 200 million more will soon join them, are also disregarded under this reasoning. The only thing that matters to this ideology is the advancement of what's claimed to be God's will, which always aligns with what benefits capital and empire.

These demands to blindly support the existing social and economic order in the name of "freedom" aren't even supported by the Catechisms of Catholicism, the main strain within this reactionary religious sphere. The Catechisms state that:

The exercise of freedom does not imply a right to say or do everything. It is false to maintain that man, "the subject of this freedom," is "an individual who is fully self-sufficient and whose finality is the satisfaction of his own interests in the enjoyment of earthly goods." Moreover, the economic, social, political, and cultural conditions that are needed for a just exercise of freedom are too often disregarded or violated. Such situations of blindness and injustice injure the moral life and involve the strong as well as the weak in the temptation to sin against charity. By deviating from the moral law man violates his own freedom, becomes imprisoned within himself, disrupts neighborly fellowship, and rebels against divine truth.

Aside from the language about these moral tenets stemming from something "divine," this passage might as well have come from Lenin, who wrote: "Let us consider the position of an oppressor nation. Can a nation be free if it oppresses other nations? It cannot." Or Stalin, who wrote: "It is difficult for me to imagine what 'personal liberty' is enjoyed by an unemployed person, who goes about hungry, and cannot find employment. Real liberty can exist only where exploitation has been abolished, where there is no oppression of some by others, where there is no unemployment and poverty, where a man is not haunted by the fear of being tomorrow deprived of work, of home and of bread. Only in such a society is real, and not paper, personal and every other liberty possible."

This is a very simple concept: that humanity can't be truly free for as long as the rights of some are being violated, and that doing away with unjust social structures is necessary for upholding these rights. Yet the figures who are most fanatically committed to proliferating Catholicism--including the dominant leaders of the Catholic Church itself--are ironically the biggest violators of this idea's call for fighting systemic injustice.

Two years ago in Bolivia, with the direct backing of the CIA and the Organization of American States, right-wing Catholics used paramilitary tactics and incitements towards violence over fabricated "election fraud" claims to force out the democratically re-elected indigenous socialist president Evo Morales. In his place they installed Jeanine Áñez, a far-right Catholic whose genocidal motivations had been clarified in an old tweet that declared: "I dream of a Bolivia without satanic indigenous rituals, the city isn't made for indians, they need to go back to the countryside!"

Áñez and the other members of the junta delayed elections, censored the media, tortured journalists, created masked and heavily armed death squads to terrorize the citizenry, did all they could to reverse the working-class gains that Morales had made (which they ironically justified by claiming that they were merely trying to "dismantle the apparatus of the dictatorial regime of Evo Morales"), neglected indigenous peoples during the pandemic, and repeatedly massacred unarmed indigenous pro-democracy demonstrators. Fitting with Christian Zionism, Bolivia's coup regime also brought in the Israelis to assist the security forces with crushing dissent.

Yet after Bolivia's people have elected the party of Morales back into power, allowing Áñez to be brought to justice through arrest, the Catholic Church has called for Áñez to be released. As Morales has said, the Church has chosen to "side with the oppressor, forget the humble and ask for freedom of the coup plotters subjected to justice when they never claimed or mentioned the victims of the Senkata and Sacaba massacres."

Expanding corporate domination & paramilitarism under an agenda of genocide denial

This effort by the Church to legitimize the atrocities of the coupists is a bitter reaction to the fact that the coup in Bolivia has been reversed, which diminishes the reach of capital and empire and forces them to turn inwards. They're doing this in part by militarizing society for the sake of profit, which has entailed the proliferation of private military contractors both within U.S. wars abroad and within internal repressive paramilitary operations. Erik Prince, the hard-right Catholic who changed his mercenary company's name from Blackwater to Academi after Blackwater was found guilty of numerous war crimes, is one of the military-contractor CEOs who's benefiting from Biden's current underhanded effort to privatize the Afghanistan war.

It was Prince's aggressive expansions of the role of mercenaries in the military during the War on Terror that paved the way for additional mercenary companies, like TigerSwan, to assist the U.S. police state with domestic repressive actions like TigerSwan's infiltration of the protests at Standing Rock. Last year, another mercenary group took the inquisition against opposition towards Christian nationalism a step further by hiring personnel to monitor polling places, likely for pro-Trump partisan purposes. Eventually, these for-profit paramilitaries may well take on the same role within the U.S. that they already have in South Africa, where private police forces have been replicating apartheid-style inequalities. Biden is certainly enabling this insidious rise of paramilitarism, with Biden still not calling for UN sanctions against Prince following revelations about Prince violating international law by going against an embargo on arms sales to Libya.

Related Topic(s): Christians United For Israel; Israel; Nuclear; Zionism; Zionists, Add Tags
Add to My Group(s)
Go To Commenting
The views expressed herein are the sole responsibility of the author and do not necessarily reflect those of this website or its editors.