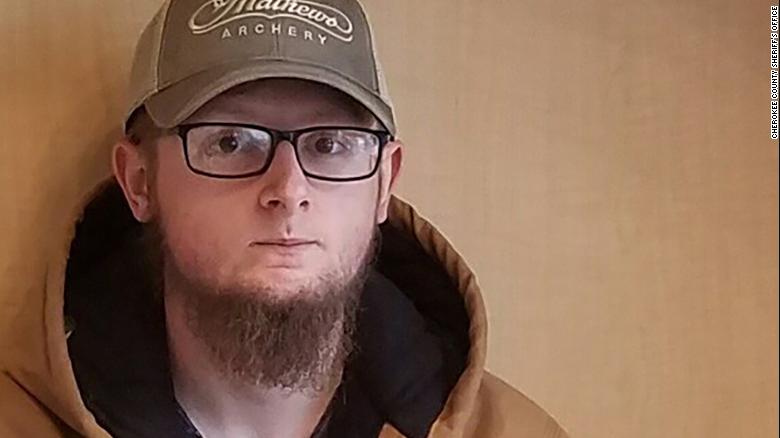 On Tuesday night 21-year-old Bible-believing Christian Robert Aaron Long (pictured above) went on a Christian crusade to rid the world, or, at least his part of the world, of sexual temptation. To do this he went into three different massage parlors and shot and killed eight people and wounded one. He was on his way from the Atlanta, Georgia area to Florida, where he intended to continue his deadly Bible-based Christian "holy" war against sexual temptation. Thankfully, he was arrested before he could commit more murders.

Six of the eight people he murdered were Asian women. One was a white woman and one was a white man. The person who was wounded by Long was a Hispanic man. Long told police that his murder spree was not racially motivated. He said he believes he has an addiction to sex, and that he wanted to eliminate places of temptation. The night prior to his deadly religious crusade against temptation, Long is believed to have been kicked-out of his parents' house because he spent hours watching porn. Robert Aaron Long and his family are Bible-believing and church-going Southern Baptists.

Police said that Long told them his sexual addiction caused him to frequent massage parlors. Long said he considered suicide, but decided to help other people with sexual addiction by eliminating the places of sexual temptation.

The ancient Jewish clergymen who wrote the Bible wanted to control other people for their own selfish gains. They did this by first convincing people that God spoke through them, and revealed to the clergy what God wanted people to do and how he wanted people to live. Looking objectively at the Bible, we see the clergy controlled what clothes people wore and how they kept their hair, what they ate and drank and their sexual lives. These are three important basic parts of everyone's life. Controlling these gave, and give, the clergy, both Jewish and Christian, the power of having control over the lives of other people.

A case in point regarding sex, and which would have had a huge impact on Long as a Bible-believing Christian, is found at Matthew 27-30, which has Jesus teaching,

Since Judaism and its offspring of Christianity are misogynistic and patriarchal, Jesus only addressed when men lust after women, not women lusting after men. And since both Judaism and Christianity are strongly anti-gay, he did not mention gay people lusting after each other. However, the rule Jesus is attempting to make, that simply lusting after or being sexually attracted to another person is committing adultery, violates who we are. We are designed by our Creator as sexual human beings. The fact that we are all sexual beings gives the clergy tremendous power over us if they can control how we think and what we believe about our God-given natural sexual instincts. Long seems to have believed his natural human sexual nature was evil, just as Christianity and the Bible teach, with the exception of sex between married people. Since he could not stop his natural sexual desires, he believed he was sinning/going against God. This is because, as a Christian, he believed the lie that the Bible is the Word of God.

The conflict between Long's natural sexual instincts and the Bible's unnatural teachings about sex caused profound confusion and frustration in Long's mind. Long became a resident of Maverick Recovery, a rehab facility in Roswell, Georgia. Long's former roommate at Maverick Recovery, Tyler Bayless, talked about Long's conflict regarding the Bible and sex. Bayless said, "It was something that absolutely would torture him." Bayless described Long as a "deeply religious person -- he would often go on tangents about his interpretation of the Bible."

Not only is it a waste of our time to attempt to make sense of the nonsensical Bible, as the Long case, and many other cases, show, it is dangerous to take its unnatural teachings seriously and to elevate them to the level of being from The Supreme Intelligence/God.

Bob Johnson is a paralegal and a freelance writer in Florida. He was raised Roman Catholic, but after reading Thomas Paine's The Age of Reason, he became a Deist. In 1993 he founded the World Union of Deists and in 1996 he launched the first web (more...)
Related Topic(s): Bible; Christian Religion; Christian Values; Christianity; God; Jesus; Nature; Other; Police; Sex; (more...) Sex; Suicide; Women, Add Tags  (less...)
Add to My Group(s)
Go To Commenting
The views expressed herein are the sole responsibility of the author and do not necessarily reflect those of this website or its editors.