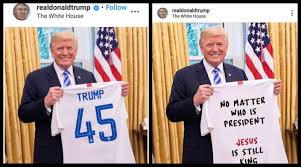 Do you ever wonder how U.S. Christians were able to elect a man like Donald Trump?

After all, Trump represents the polar opposite of the values embodied in Jesus of Nazareth. In fact, Jesus was the kind of person Donald Trump and his supporters actually hate.

I mean, the Nazarene was poor, dark skinned, the son of an unwed teenage mother, and an immigrant in Egypt. Jesus was viscerally opposed to an empire very like the United States. And that empire (Rome) executed him as a terrorist. Jesus ended up on death row and finished as a victim of torture and capital punishment. To repeat, Trump and the Republicans hate people like that. They want Middle Easterners like Jesus out of their country at best, and dead at worst.

Again, how could followers of Jesus elect his sworn enemy?

The readings for today's feast of "Our Lord Jesus Christ, King of the Universe" provide the answer. They explain what might be termed the great "makeover" of Jesus of Nazareth changing him from the leader of an anti-imperial revolutionary movement into a pillar supporting the very institutions that assassinated him.

In other words: through 4th century sleight of hand, the Jesus who sided with the poor and those oppressed by empire was made to switch sides. He was co-opted and domesticated kicked upstairs into the royal class. He became not only a patron of the Roman Empire, but a "king" complete with crown, purple robes, scepter and fawning courtiers.

Reza Aslan's best-seller, Zealot, explains the process in detail. The book centralizes today's account of Jesus' crucifixion in Luke, Chapter 23. There, Aslan pays particular attention to (1) Jesus' cross, (2) to the Roman inscription identifying Jesus as "King of the Jews," and (3) to the dialog between Jesus and the two "thieves" presented as sharing his fate.

Take the cross first. It was the mode of execution reserved primarily for insurrectionists against the Roman occupation of Palestine. The fact that Jesus was crucified indicates that the Romans believed him to be a revolutionary terrorist. Aslan asks, how could it have been otherwise? After all, Jesus was widely considered the "messiah" i.e. as the one, like David in today's first reading, expected to lead "The War" against Israel's oppressors.

Moreover, Jesus proclaimed the "Kingdom of God," a highly politicized metaphor which could only be understood as an alternative to Roman rule. It would return Israel, Jesus himself promised, to Yahweh's governance and accord primacy to the poor and marginalized. The Romans drew logical conclusions. Put otherwise, the Roman cross itself provides bloody testimony to the radical threat the empire saw personified in Jesus.

That threat was made specific in the inscription the Romans placed over the head of the crucified Jesus. It read, "King of the Jews."

Typically, those words are interpreted as a cruel joke by the Roman procurator, Pontius Pilate as if he were simply poking fun at those who saw Jesus as the worthy successor of Israel's beloved King David.

However, according to Reza Aslan, nothing humorous was intended by the inscription. Instead it was a titulus. Every victim of crucifixion had one a statement of the reason for his execution. The motive for Jesus' crucifixion was the same as for the many others among his contemporaries who were executed for the same crime: aspiring to replace Roman rule with home rule with an Israel governed by Jews instead of Romans. The titulus on Jesus' cross, along with the cross itself identify him as the antithesis of what he eventually became, a Roman tool.

And then there are those two thieves. Aslan says they weren't "thieves" at all. That's a mistranslation, he points out. A better translation of the Greek word, lestai , would be "bandits" the common designation in the first century for insurrectionists. And there probably weren't just two others crucified the day Jesus was assassinated. There may have been a dozen or more.

In this context the dialog between Jesus and two of the terrorists crucified with him takes on great significance. Actually, it documents the beginning of the process I described of changing Jesus' image from insurrectionist to depoliticized teacher.

Related Topic(s): CHRISTIANS CANNOT BE CONSERVATIVES; Christian Religion; Christian Values; Christianity; Donald Trump; Empire; Jesus; Sunday; Trump As The Messiah; Trump Bible; (more...) Trump Religion, Add Tags  (less...)
Add to My Group(s)
Go To Commenting
The views expressed herein are the sole responsibility of the author and do not necessarily reflect those of this website or its editors.