"I stole a look over at my husband, nervous he would be comparing this school with its peeling corner paint to the fancy private school campus. He wasn't. Instead, he whispered 'The kids look happy. Let's go here.'"
- Audrey Wauchope Lieberstein

In the first four articles of the Voices From The Community series (here, here, here, and, here), representatives of constituencies throughout the Los Angeles Unified School District (LAUSD) expressed their concerns about the district and detailed how they would like to move forward. This new installment takes a different direction with LAUSD parent Audrey Wauchope Lieberstein writing about why she chose to send her child to Dixie Canyon Avenue Elementary School, a public school in the San Fernando Valley: 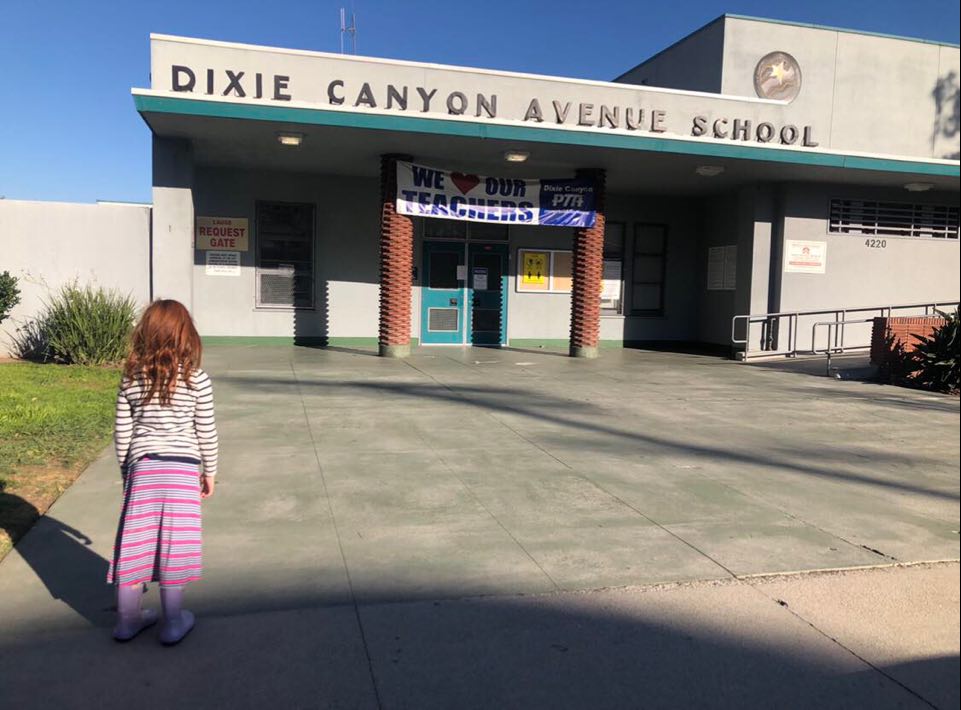 When I was a kid growing up in Connecticut, there was no talk about "school choice." Private schools and charter schools were not discussed. It was inconceivable that you would not send your child to the local public school. In white suburban Connecticut, we were proud of our schools. In fact, families moved to a town FOR the schools it provided.

Imagine my shock some twenty years after my public school graduation when I heard the whispers around me about schools in my new home of Los Angeles. They were casual at first, perhaps a throw-away comment by someone: "We wish we could go to our local public school but you know... LAUSD." Did I know? I didn't, it seemed. But surely soon I would figure it out.

Those whispers grew louder as I approached giving birth. I would sit in a room surrounded by my peers at work and listen to the tales of private schools and sometimes a charter (always by the founding parents). I was confused but I admit, completely willing to believe the hype that it was just not possible to send your child to public school if you wanted a decent education in this city.

Meanwhile, I was about to get my own education about education in Los Angeles. I met a man who had a daughter and followed along their school journey as she started at a lovely private school. I went to drop-offs, clapped at concerts, and smiled through fundraisers. It was, as everyone had said, a wonderful education.

I thought a lot about that word "better." Sometimes at night, the thought started to creep into my brain - what does "better" actually mean? Does it just mean" Wealthy? White? Both? Did it mean a manicured campus and the ability to fundraise? I needed to see for myself what the alternative to "better" actually meant.

A full three years before our child was set to begin kindergarten my husband and I signed up for a tour of our neighborhood school. I felt silly and out of place, a woman with a preschooler who did not need to know anything about her school for years. We walked through the campus - a mixture of what people look down on (grey paint! So much blacktop! Where is the shade?) and cute murals depicting dolphins, the school mascot. A "buddy bench" painted so that kids could have a place to sit with a friend smiled back at me. An enthusiastic PE teacher stopped his relay races to wave 'hi.'

We took a seat in the auditorium to be greeted by a loveable teacher who loudly proclaimed that HER children had gone to the school. I stole a look over at my husband, nervous he would be comparing this school with its peeling corner paint to the fancy private school campus. He wasn't. Instead, he whispered "The kids look happy. Let's go here."

And that is how, three years later, I found myself sitting through Kindergarten on Zoom. Not exactly the start of school I had envisioned on that tour. Yet, through the computer screen, I have witnessed my daughter's amazing teacher pull magic out of the air to teach twenty-three kids how to read. I have watched a community come together through a global pandemic, parents helping in quiet ways most will probably never know about. I have made friends through Zoom and Slack as we discuss how to make our campus more equitable. I have found a home in the middle of a big city. A home in a place that a different version of myself once drove past and written off as an "ugly building." Sometimes now I slow down as I drive past the campus and I let my daughter dream about running through the gates. Because to her, that school is beautiful.

Related Topic(s): Public Schools, Add Tags
Add to My Group(s)
Go To Commenting
The views expressed herein are the sole responsibility of the author and do not necessarily reflect those of this website or its editors.