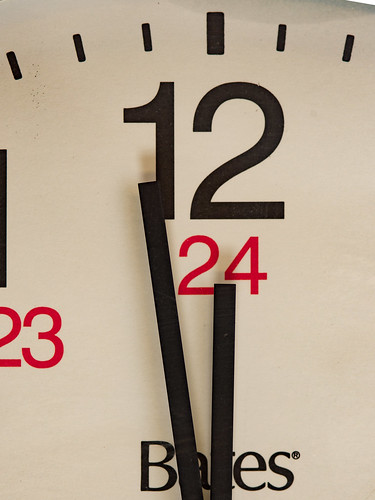 A Doomsday Clock 11:58 1/2 P.M.
(Image by michael_swan)   Details   DMCA
Professor Noam Chomsky, who needed no introduction, addressed a webinar Wednesday evening June 10 via Zoom on the occasion of the Fortieth Anniversary Membership Gathering of the Central New Jersey Coalition for Peace Action. He was calm and encouraging even in the face of the dire realities he cited with stunning knowledgeability and perspectives.

In the midst of this cataclysmic cesspool, he began, this stinking swamp, there is a window of opportunity:

There are countrywide protests with support of the military after 400 years of hostility; Black Lives Matter is supported by two-thirds of the population, said Chomsky.

"There is a change of consciousness."

Let us backtrack to January of this year. Every January the Bulletin of Atomic Science gauges the security of the world on the Doomsday Clock, first created after the Hiroshima and Nagasaki bombings in 1947. At that time it was set at 7 minutes to doomsday. Each year of Donald Trump's (hereafter DT's) presidency, the minute hand has moved one minute closer; now they have had to boil it down to seconds, so it became 100 seconds.

There are three main units of destruction: the nuclear peril, environmental destruction, and the deterioration of democracy.

Agents of the destruction are Wall St. and the White House.

Re the PANDEMIC: scientists knew one was likely; we know how to handle epidemics, but there is no profit to be made by preventing catastrophes AND the neoliberal policy of the government as begun under Reagan, that government is the problem, not the solution (as Thatcher agreed), made sure that the government didn't step in.

G.H.W. Bush had an advisory committee; and the Obama administration was scientifically oriented; Obama ordered a study that figured out how to prevent a pandemic and put all mechanisms in place, but in 2017 DT dismantled it.

The DT administration is UNscientific!

In 2017, the warning began of an impending pandemic; intelligence warned DT about it; and again in October 2019. In January 2020, China identified it and sequenced the genome; some countries went with it well in East Asia and Oceania; the Europeans then homed in on it; the US was at the bottom of the effective reactors.

On February 10, 2020, DT's budget defunded the Center for Disease Control and other organizations in the middle of the pandemic.

Instead there was support of fossil fuels BUT in March, the stock market began to plunge and DT declared an emergency, blaming this cataclysm on China and the WHO, on which the poor countries of the world depend for survival.

Kill them all, says DT, to further his own interests.