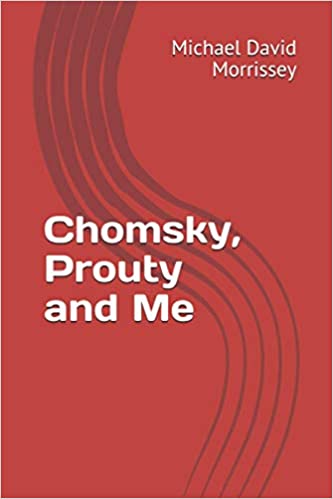 Chomsky, Prouty and Me is a collection of the letters I wrote to Noam Chomsky and Fletcher Prouty (the real-life "Mr. X" in Oliver Stone's movie JFK), and a few other people, over a period of six years (1989-1995), along with some essays that derive from this correspondence.

I have not included their letters to me, as I did with Salandria's letters in my Correspondence with Vincent Salandria (2007), for copyright reasons, but anyone who is familiar with Chomsky's work (especially Rethinking Camelot, 1993) and Prouty's (especially JFK: The CIA, Vietnam, and the Plot to Assassinate John F. Kennedy, 1992) should be able to follow the "dialogue."

The letters and essays are presented chronologically in order to serve as a kind of memoir, showing how my preoccupation with certain issues developed over time, especially the question of whether President Kennedy was assassinated because he had decided to withdraw from Vietnam. Opinion is still divided on this question, and I think it is still important. Chomsky is certainly the primary advocate of one point of view, and I know of no one who has challenged him on it to the extent that I have. Nor have any of my arguments, as far as I know, found their way into any of the published literature, except for my own articles and books (Looking for the Enemy and The Transparent Conspiracy).

Rob Kall suggested that I include here one of the letters, but to keep it short (and pursuing the idea of memoir) I will excerpt parts of several letters where I first mention what I still think are important ideas and which I expanded on later: transparent conspiracy and the false debate about JFK's Vietnam withdrawal policy.

In my second letter to Prouty I mentioned what I later called the "transparent conspiracy," (following Salandria, who had had the same idea back in 1971, though I didn't know it at the time). In The Transparent Conspiracy I also applied this concept to 9/11.

(Dec. 30, 1989) Something that has struck me while reading G/L [Robert Groden and Harrison Livingstone, High Treason, Conservatory Press, 1989] and your letters -- if the conspiracy is this big, why didn't they do a better job of it? They surely could have done it any number of ways (a pin-prick, a drop in cup of coffee, etc.) and left no traces and no questions.... The point is, I wonder if the "carelessness" is deliberate? Do they want us to suspect the worst, and at the same time, want us to know that they can get away with it? What could be a better, and more intimidating, demonstration of absolute power and control?

By July 1992 I had discussed various topics with both Chomsky and Prouty (e.g., Jakob Segal's theory of the origin of AIDS, the Bay of Pigs invasion, the murder of Alfred Herrhausen -- all in Looking for the Enemy) and was well into what turned out to be a marathon debate with Chomsky about JFK's Vietnam policy. Despite the long (and continuing) discussion of that thorny thicket casually referred to as the "documentary record," about which I only said my last word (I hope!) in an article written in January 2019 ("How They Play(ed) Us" -- also in this book), the issue was clear (to me) from the beginning, as I summarized in a letter to Prouty.

(July 27, 1992) This same group ([Alexander] Cockburn [and Chomsky] et al.) insist that there was no policy reversal in Vietnam, that the only difference between JFK and LBJ was that the assumption that "we" were winning changed. The "condition" of withdrawal on "victory" never changed. I don't buy that, but I don't buy Newman's argument completely either (JFK and Vietnam). It seems impossible to know what JFK really thought, unless we accept O'Donnell and Mansfield's reports, which many simply refuse to do because they say they were biased.

Still, even if it was the assumption that victory was in sight that changed, which in turn caused the withdrawal policy to be abandoned, the fact remains that the policy changed after the assassination. Cockburn et al. argue that it didn't, because they define "policy" as "withdrawal conditional upon victory." Thus they say that the policy didn't change at all, just the condition. That seems to be the bottom line of this controversy. Those who are determined to see no connection between Vietnam and the assassination see it this way, and demand "proof" to the contrary. This attitude of course is indistinguishable from the government-media-propaganda line, and I find it very hard to take from people who claim to be (and are in most other cases) radical dissenters. I'm not going to say that they are part of the Grand Conspiracy, which is exactly what they would expect a Conspiracist to say, but it troubles me.

After about a year of more exchanges with both Chomsky and Prouty, I was beginning to think of this controversy as a "false debate":

(June 18, 1993, to Prouty) [Chomsky's] position on the pullout business, as you know, has really bugged me, and I can't seem to get beyond it....The two people who have most influenced my thinking in the past few years are Fletch Prouty and Noam Chomsky, both of whom I respect and admire greatly. Trouble is, each thinks the other is a fraud. I think they're both wrong, about each other, and both right (and in fact in total agreement) about most other things. That puts me in a hell of a position, especially since all three of us are 180° from the mainstream. The geometry gets very confusing....

I think Chomsky is wrong on JFK and Vietnam, as I have been at pains to demonstrate to him. I think I won the argument, but obviously he doesn't agree. I can't believe he's "on the payroll," though I admit that if anyone else argued as badly as I think he is arguing on this point, I would be suspicious....

You say "the 'cui bono' is the essential belief that the government must keep alive the idea that JFK never did intend to keep us out of the Vietnam War." Yes, I agree completely, but this doesn't jive with your suspicions about Newman. Newman, after all, is saying that JFK did want to withdraw. I am suspicious of Newman too, simply because William Colby praised the book, but I don't see your point about Newman working for NSA. You said in your letter you had not read his book, so maybe you meant simply that he could have been spying on Stone. But he did write a book, and the book says JFK wanted to pull out.

I would speculate somewhat differently. Suppose Newman was a patsy ignorant of the material, as you say, and recruited to write the book (as well as spy on Stone) for Colby and his ilk. The cui bono may be in the disastrous reception the book encountered from people like Cockburn and Chomsky. Newman's more specific thesis is that JFK had a secret plan to withdraw pretending to go along with the optimistic view of McNamara/Taylor, but secretly agreeing with the pessimistic views he was also apparently getting; so his real, secret plan, according to Newman, was to withdraw to prevent defeat under the guise of withdrawing after "mission accomplished," as per McNamara/Taylor. I tend to agree with Newman, because I don't think JFK was a bloody fool, but I can't prove it, nor do I think Newman proves it. But that may be just the point. Since he cannot prove it, it opens the door to Chomsky et al. to attack him and the "withdrawal thesis," as if Newman's version of it (a "secret plan") was the only one. This is exactly the quarrel I had with Chomsky, as you will see [in Looking for the Enemy].

I just wonder if Colby & Co. didn't foresee this. In other words, they may have gotten Newman to write an unconvincing book they knew would be discredited, in order to discredit the whole idea of JFK wanting to withdraw which, despite Chomsky, and as I told him over and over again (in vain), is not a "thesis" but a fact. So you have the film [JFK] containing a legitimate and credible thesis, a book (by somebody associated with the film) exaggerating the thesis to the point where it can be discredited and rejected by respected elements of the left, and the public caught somewhere in between. Result: limbo. This is where they want us, not knowing what to think or what the facts are. Even Chomsky and I, who are presumably on the same side and both sincere, cannot agree on the simple and basic fact of the policy reversal. Newman's book may have been a planned ingredient in generating this destructive dispute (which involves many more people than just Chomsky and me).

Prouty died shortly before 9/11 (on June 5, 2001) so I don't know what he would have thought about that, but we agreed on virtually everything else. Although Chomsky was at least receptive to the ideas we discussed at first (e.g., Segal's theory of the origin of AIDS), our discussion about JFK and Vietnam in the end became quite vitriolic, which I regret since I still admire and respect him greatly and agree with him on most other issues. Nevertheless, I also still think I won what I would call the real debate (ours), as opposed to the false debate he had with Newman et al. My final word on Professor Chomsky and epilogue to the book is an article published at OEN in October 2018 called "Stupidity Theory Revisited."

Related Topic(s): Aids; Bay Of Pigs; Chomsky; JFK Assassination; Propaganda; Prouty; Vietnam War, Add Tags
Add to My Group(s)
Go To Commenting
The views expressed herein are the sole responsibility of the author and do not necessarily reflect those of this website or its editors.