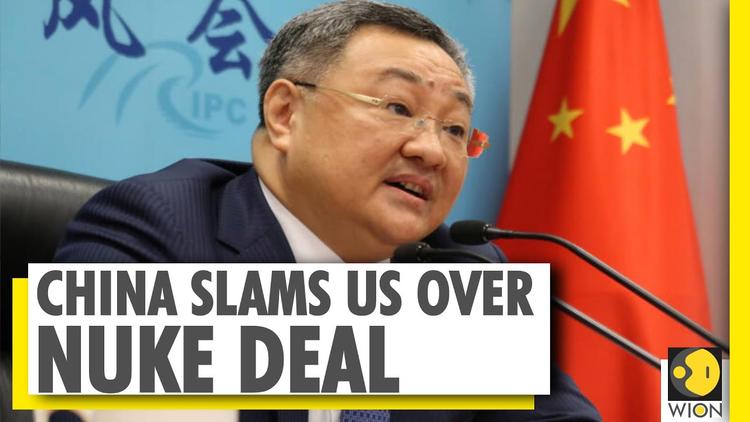 The Iran nuclear deal was horse trading. Iran gave up 80 percent of its civilian nuclear enrichment program and was supposed to get in return the lifting of all sanctions. Instead, Trump maximized sanctions, in what is essentially a trade and financial blockade on the country. So it is like Iran gave its horse to the US and Europe, and was going to receive a horse in return, but Trump got out his Glock and shot dead the horse that was being traded to Iran. Iran just got a smelly equine corpse and lost its own beautiful white steed.

On Tuesday in Vienna, under the chairmanship of the European Union, AP says, the remaining signatories to the 2015 Iran nuclear deal gathered to reaffirm their commitment to the deal. The Iran nuclear deal or Joint Comprehensive Plan of Action (JCPOA) of 2015 was signed by the 5 permanent members of the UN Security Council plus Germany (which informally represented the European Union). On Tuesday, the US was absent, since Trump had pulled out of the accord, and was made fun of for Washington's silly proclamation that it can invoke a "snapback" provision of the deal.

The JCPOA stipulated that if Iran slacked off on its obligations, any of the signatories could initiate the reimposition of the 2007 UNSC economic sanctions on Iran, which were lifted in January, 2016, as part of the JCPOA. The Trump administration breached the treaty in May, 2018, but insists it still has the prerogatives of a signatory. The other UN Security Council members are laughing that pretension out of the water.

According to AP, China's representative at the Vienna meeting yesterday, Fu Cong, expressed impatience with the US, saying, "The U.S., even though it is a superpower, is just one country . . . So other countries are moving on."

According to the Chinese press, Beijing's representative said of the nuclear accord, "We are doing everything possible, hand in hand with the entire international community, to forestall the American attempt to kill it. The United States is making a mockery of international law, and that must not be allowed." He accused the US of "sabotage."

Iran allowed International Atomic Energy Agency inspectors access to two sites this week, which the IAEA had asked to see. Such inspections are part of the JCPOA.

The problem is that China is virtually the only signatory that is living up to its side of the bargain with Iran, inasmuch as it is freely trading with and investing in the country, defying US threats of sanctions. China has accumulated a lot of soft currency and can use it to trade with Iran. The US Treasury Department can only sanction dollar trade and use of exchanges such as SWIFT for commerce with Iran.

Otherwise, the US mafia-like threats against third countries who might so much as buy Iranian oil have scared off most of the country's customers and crashed its economy. Since there is no UNSC resolution against Iran trade, the US third party sanctions have no backing from international law. They aren't even rooted in any Congressional act, though Congress is supposed to be in charge of interstate commerce. Trump just woke up one morning and imposed them all on his lonesome. They are the act of one man.

Trump even engaged in outright theft by confiscating four oil tankers going from Iran to Venezuela. They were on the high seas, and there is no UNSC resolution allowing them to be boarded. By the law of the sea, the US seizure can only be characterized as piracy. Companies based in Dubai and Oman, however, maintain that the tankers belong to them and were selling in the Caribbean and to Latin America, and they have filed a lawsuit to get the tankers back.

The Financial Tribune quotes Majid Reza Hariri, chairman of the Iran-China Chamber of Commerce, as saying, "Seven countries, including China, Iraq, Afghanistan, the UAE and India, account for 75% of our foreign trade; over 50% of Iran's non-oil exports are headed to Iraq and China, all indicative of our export vulnerability."

Global trade is off by 30%, and Iran's trade is down by at least that percentage, maybe a bit more.

If Europe wants the Iran deal to remain in place, then it is going to have to step up and trade with and invest in Iran, and simply rebuff Trump's threatened sanctions. They have established an Instex exchange mechanism to avoid those sanctions, but have not had the courage actually to use it to any significant extent.

Otherwise, there is no particular incentive for Iran to keep up its side of the bargain when all it got was a dead horse.