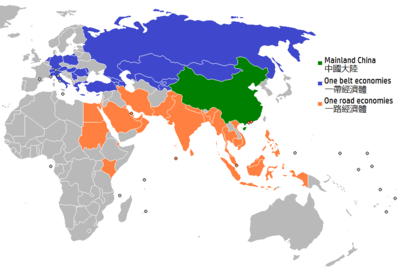 Transcript of Peter Koenig's presentation to webinar Conference (14 December 2020), on "China's New Development Paradigm and High-Quality Belt and Road Cooperation", China Center for Contemporary World Studies, and the Chongyang Institute for Financial Studies, Renmin University of China, my presentation was on China's Economy of Peace.

China, about a decade ago, has deliberately embarked on an Economy of Peace. A strategy that China pursues, unimpressed by constant aggressions from the west, which are mostly led by the United States.

Is it perhaps this Chinese steadfast, non-aggressive way of constant forward-creation and embracing more and more allies on her way - that has made China such a success story? Overcoming violence by non-violence is engrained in 5000 years of Chinese history.

Despite relentlessly repeated assertions by the West, China's objective is not to conquer the world or to "replace" the United States as the new empire. Quite to the contrary. The alliance China-Russia and the Shanghai Cooperation Organization (SCO) is seeking a multipolar world, with more justice for all - i. e. fairer trade in the sense of "win-win", where all parties are benefitting equally.

This is also a policy pursued by the recently signed Regional Comprehensive Economic Partnership, or RCEP, the 15-country trade agreement signed at the 37th ASEAN Summit - 11 November 2020, in Vietnam, as well as by President Xi's Belt and Road Initiative (BRI), launched in 2013 by the President himself.

China does not coerce cooperation - but offers peaceful cooperation. In 2014, President Xi Jingping traveled to Germany to offer Madame Merkel for Germany to become - at that time - the westernmost link to the BRI, or the New Silk Road. This would have been an opening for all of Europe. However, Madame Merkel, having to follow Washington's mandates - did not respond positively. President Xi Jinping returned to Beijing, no hard feelings. And China continued her persistent course of connecting the countries of our Mother Earth with transport infrastructure, inter-country industrial ventures, education and research projects, as well as cultural exchanges to enrich the world - all the while respecting individual countries' monetary and political sovereignty.

Many country leaders from Africa and the Global South in general express openly their contentment and satisfaction to have China as a partner and for dealing with China on the basis of equals. With the west, especially the US, there is bullying and coercion, unequal contracts, and often total disrespect for legally signed contracts.

Meanwhile, the west lives in a permanent state of hypocrisy. It bashes China - actually without any reason, other than that the dying Anglo-Saxon-American empire mandates it to its partners, especially the European NATO allies - under threats of sanctions. Unfortunately, spineless Europe mostly complies.

Yet, having outsourced - for economic and profit reasons - most production processes to reliable, efficient and cheaper-labor in China, the west depends very much on China for its supply chains. The covid-crisis, first wave, has clearly shown how dependent the west is on goods produced in China from sophisticated electronic equipment to pharmaceuticals.

As an example: About 90% or more of antibiotics or ingredients for antibiotics are Made in China. Similar percentages apply to other vital western imports. - But China does not "punish" or sanction. China creates and moves forward offering her alliance to the rest of the world.

Peter Koenig is an economist and geopolitical analyst. He is also a water resources and environmental specialist. He worked for over 30 years with the World Bank and the World Health Organization around the world in the fields of environment and water. He lectures at universities in the US, Europe and South America. He writes regularly for Global Research; ICH; New Eastern Outlook (NEO); RT; Countercurrents, (more...)
Related Topic(s): China; China New Silk Roads, Add Tags
Add to My Group(s)
Go To Commenting
The views expressed herein are the sole responsibility of the author and do not necessarily reflect those of this website or its editors.

Towards a New Gold Standard? Or a Currency War with China?