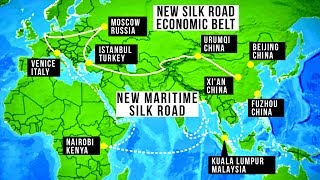 By now many people in the US have become aware of China's BRI, the Belt and Road Initiative, formally One Belt, One Road-though it's hardly mentioned in the corporate MSM.

First announced in 2013 by Chinese President Xi, it's an ambitious new "Silk Road" high speed rail network going westward from China through Russia, the "Stans", Iran, Turkey, Europe all way to Portugal and into England.

The plan also includes maritime routes down through Malaysia and Indonesia. Even Australia is interested with northern most Darwin the port of entry.

Pepe Escobar has been in the forefront of making known Xi's ambitious plan for China's vast infrastructure projects since they were first announced.

Escobar's article provides links to the vast network of "New Silk Road" megaprojects already built--which admittedly are promotional videos--without revealing any negative aspects such as local indigenous complaints--but do reveal the massive infrastructure investment commitment made by Xi and China.

Most pointedly, this Chinese BRI initiative does not include the US, though allies Britain, France, Germany, Italy the biggest economies in Europe appear mostly on board with Xi's plan.

The last large infrastructure investment in the US was the country's Interstate Road network, an Eisenhower-era initiative by Ike who as the Supreme Commander of Allied Forces in Europe in WWII had seen Germany's autobahn road network and envisioned a similar network being built in the US.

So in 1956 the Federal Aid Highway Act was born, authorizing the construction of the US interstate-road system. Begun in the early 1960s it was mostly completed by the early 1990s.

Significantly there's been no comparable nationwide infrastructure investment projects and no high-speed rail network built anywhere in the US.

Progressives in Bernie Sanders presidential primary campaign called for a $trillion infrastructure investment including a nationwide high-speed rail network replacing the nation's decaying rail network, repair of decaying roads and bridges, but congress isn't interested. There are no lobbyists pushing congress to consider investment in massive infrastructure projects. Congress is only interested increasing the defense budget and their cronies' largesse in the defense industry who are of course some of the primary underwriters of their election campaigns.

And that's because the US is first and foremost a war-based economy requiring "enemies" to be fought.

There are no imperial Japans or Hitler's Germany. The Communist Soviet Union ceased to exist in 1991. So new "enemies" had to be "created". It took ten years but with 9/11 it became Osama bin laden and "Dubya" Bush's global war on terrorism.

Retired. The author of "DECEIT AND EXCESS IN AMERICA, HOW THE MONEYED INTERESTS HAVE STOLEN AMERICA AND HOW WE CAN GET IT BACK", Authorhouse, 2009
Related Topic(s): Belt And Road Initiative; China New Silk Roads; Infrastructure; Trade, Add Tags
Add to My Group(s)
Go To Commenting
The views expressed herein are the sole responsibility of the author and do not necessarily reflect those of this website or its editors.