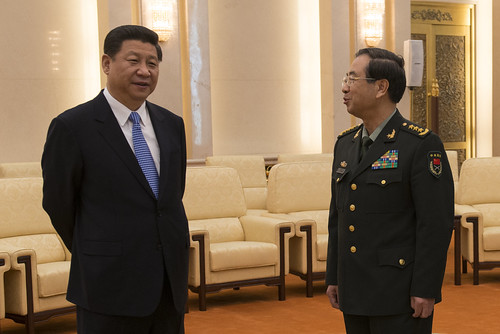 Chinese President, Xi Jinping with Gen. Fang Fenghui, Chief of the Gen. Staff in Beijing
(Image by Chairman of the Joint Chiefs of Staff)   Details   DMCA
China's perceptions about the world around it have had an important influence on its recent decisions to reform its military. Also, the reforms are aimed at maintaining the supremacy of the Chinese Communist Party (CCP) whose primary responsibility is to ensure single-party rule in China. So surprise the provincial military commands have been placed under the control of newly set -up National Defence Mobilization Department which is a party of President Xi Jinping --led Central Military Commission.

These are, of course, well known observations and, therefore, would not be saying anything new. However, there is another angle to the Chinese 'dream' action. Seen from the focus of peripheral diplomacy which President Xi Jinping unfolded two years ago, the South China Sea is the main focus area, in terms of China establishing its territorial sovereign rights over a energy rich area and ensuring that the US re-balance to East Asia remains only in name.

The other aspect of the South China Sea is the assertion of the greater role being played by the People's Liberation Army Navy (PLAN) in waters further and further beyond China's shores. The PLAN aims to convert itself into a blue water navy and it is symbolic of China's efforts to protect its sea lines of communication. Essentially for two reasons: one to protect the country's energy security which is coming mainly from the Persian Gulf; two to become a naval power which can reach Africa where China has a number of commercial and economic interests.

China's major concerns internally remain focused on Buddhist Tibet and Muslim majority Xinjiang that borders Pakistan, which has been providing . sanctuaries to Uyghur Islamist militants. Therefore, the next aspect of its military reorganization relates to having the unity of command in the military to handle internal crises. At the end of the day, there is a lesson here for India as the change in the pecking order of the Tibet Military Command indicates that China intends to ensure that India does not meddle in Tibet.

With an eye on India, China has also raised the level of the Tibet Military Command's authority and placed it directly under the command of the People's Liberation Army ground forces. The rank and status of the Western Tibet Military Command has been elevated widening the scope of its missions and combat preparedness.

The move would raise its authority, including the designation of troops, but also "expand their function and mission", the deputy director of the Political Work Department of the Tibet Military Command, Zhao Zhong, was quoted as saying. This would also boost their combat readiness.

The Tibet Military Command, however, will be directly under the PLA Ground Force, headed by General Li Zuocheng, who sits on the CMC. Its political rank will be elevated to one level higher than its counterpart provincial-level military commands and will come under the leadership of the PLA Army.

Global Times reports this suggested that "the command may undertake some kind of military combat mission in the future." Tibet Military Command required "specialist mountain skills and long-range capabilities, which need the deployment of special military resources".

The Xinjiang Military Command may also be elevated. The Tibetan and Xinjiang commands are under the newly created Western Theatre Command, the largest of five newly reorganised military regions of the PLA.

The crucial point that is often said and reiterated is that the current wave of military reform strengthens the hands of President Xi Jinping over the PLA and the degree of control he exerts over the armed forces will also allow the President greater command over internal security. This has implications for Tibet and Xinjiang also.

Early in 2016, China announced the restructuring of its four military departments into 15 organs under the Central Military Commission (CMC), a change that will centralize power under the CMC. The move is part of a push to reassert the absolute authority of the party commission headed by Xi and modernize the military's organizational structure. Xi is also pressing ahead with the downsizing of the military by 300,000 members to eliminate many non-combat-related functions.

The reshuffle of the CMC highlights the centralized leadership of the CMC in both administration and command of the PLA, which will ensure the multiple-department CMC becomes more efficient in supervision and coordination. It also embodies the military reform outline issued at the end of November 2015, which included adjusting CMC headquarters system and adopting multiple departments under the CMC.

The reshuffle means that the CMC can give direct orders to battle command zones in combat without notifying the General Staff department and different services. The establishment of Joint Staff Department means that China will focus on joint operations among all service branches, including the army, air force, navy and the rocket force.

The reorganization, which was officially launched on 1 January 2016 will fundamentally redefine the roles, missions and authorities among the services -- particularly the People's Liberation Army, or PLA -- and the Central Military Command.