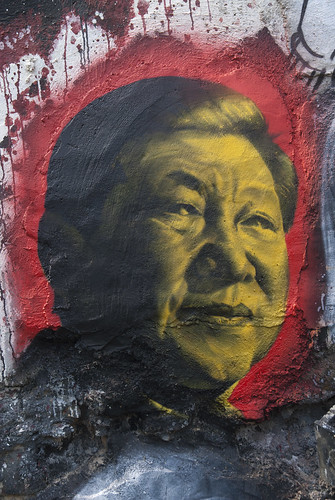 China's socialist revolution in 1949 may turn out to be the single most impactful event in the history of class struggle. This is because it established a socialist state that would serve as a major foil to U.S. imperialist hegemony even in the event that the USSR fell. At the moment when the Washington imperialists succeeded in dismantling the Soviet Union, China didn't appear to be much of a problem; it was supposed to be the "end of history," the time when U.S. capitalism had forever defeated any potential existential threats. But the hubris of the imperialists prevented them from realizing that China was on the cusp of an unprecedented success.

Throughout the 2000s, China's economic growth reached an acceleration point that prompted the pro-Washington intelligentsia to express concern. In a 2015 paper titled The 2000s: China's Rise, Responses to It, and IR Theory, U.S. Asian-studies expert Gilbert Rozman wrote that "IR [international relations] theory faced the challenge of combining or disentangling three threats to the international order: the danger from global terrorism, as revealed by the attack on the United States in 2001; the proliferation of nuclear weapons, as exposed in the 2002 turning point in the North Korean nuclear crisis; and the rise of a superpower in opposition to the existing global system, as gradually became clear for China over the decade."

These three developments precipitated the start of the "War on Terror", the (so-far futile) efforts to bully the DPRK into giving up its nuclear weapons, and the current hybrid war against China. These things represent the U.S. empire's violent and belligerent reaction to its own decline throughout the last two decades. And they appropriately all were set into motion in the early 2000s, the time when Washington's reckless invasions of Afghanistan and Iraq set the U.S. empire into an ongoing tailspin of global decline.

In the same years when the DPRK was decisively moving towards attaining unbeatable defense tools, and when the U.S. was engaging in self-destructive military adventures, China was setting itself on the path to becoming a superpower that could subdue America. Between 2000 and 2005, China's capacity to produce intermediate goods like steel and chemicals increased to the point where the country no longer needed to import these products. This would prove to be a turning point in China's development, signified by the trend that it set: as the 21st century progressed, China would become less reliant on economic help from the capitalist world.

This has become apparent as the living standards of the Chinese people have continued to vastly increase throughout the last couple of decades. Since the Deng reforms, 850 million people in China have been lifted out of poverty, with around 250 million of them having been saved from poverty throughout the last twelve years alone. This historically unparalleled improvement in living conditions that China's Marxist-Leninist model has achieved is a vindication of communism thirty years after communism was said to have been defeated. And it's gone along with an increasingly successful effort by China to outcompete the U.S.--and to put an end to the U.S. empire in the process.

A report from last year concluded that the Chinese are "beating the Americans at their own game", in that China is using the same approach Washington used to subdue the Soviet Union in order to win the new cold war. "The Soviets were never able to match, much less overcome, America's technological superiority," said the report. "The same may not be true for China--certainly not for lack of trying. Indeed, China is keenly focused on blunting the U.S. military's technological superiority, even as it strives to achieve technological parity, and eventually technological dominance."

This is what U.S. imperialist politicians mean when they complain about China "stealing intellectual property": an effort by China to make its defense capabilities unbeatable in the face of belligerence and military encirclement from Washington.

For a number of years already, the U.S. has lacked the resources to be able to win a hypothetical war against a Chinese-Russian alliance. Washington's relative disadvantage in this arms race becomes more apparent as U.S. belligerence against China and Russia drives these two countries to strengthen their military ties. In fact, the more the U.S. steps up its desperate effort to crush China and Russia, the more Washington ends up globally isolated and weakened; Washington's efforts to bully Germany into cutting its important Russian ties are undermining the unity of the NATO alliance, while Washington's relentlessly aggressive stances towards China are alienating many countries that seek to partner with the rising superpower.

This great backlash to the U.S. hybrid war on China is having another consequence, one that eerily reflects the idea that China is doing to the U.S. what the U.S. did to Soviet Russia: America is descending into a failed state as a result of its extreme investment in militarism. Parallel to how Russia's military spending severely dug into Soviet living standards in the lead-up to the country's collapse, the U.S. military budget now makes up 64.5% of the country's discretionary spending at a time when half the country has become poor. While millions continue to slip into poverty each month during an economic depression, and the U.S. government refuses to seriously address COVID-19, U.S. social unrest is naturally rising.

America is being destabilized in a similar way to how the Soviet Union was destabilized. Except for the U.S., the process of collapse is more dramatic due to its severe lack of an adequate social-safety net. Neoliberal economic deterioration, oligarchic government corruption, and out-of-control military spending have reduced the U.S. to an increasingly unstable rogue state with rapidly declining global influence.

As this vacuum of global power appears, China is filling it through a non-imperialist foreign-policy approach that reflects Marxism-Leninism's goal of steering civilization closer towards socialism. China doesn't seek to dominate this new world order, but to serve as a global actor that advances peace whenever it has the opportunity to do so. It seeks not to use the resources of the Global South to enrich itself, as the NATO imperialist powers have done, but to engage in trade that undoes the legacy of colonialism by facilitating the development of historically exploited nations.

In this new world order, China won't be able to single-handedly bring about socialist revolutions in the capitalist world (militarily fomenting foreign revolutions isn't one of its priorities), but it can help bring much of the globe out of the impoverished and oppressive paradigm that Western imperialism has created.

Because of this influence that China has come to hold over the world's future, the country has made Marxism-Leninism into what could become the world's next most powerful political force. U.S. imperialism previously held this role, but now the tables are turning.

Related Topic(s): China; China Russia Alliance; Hegemony; Socialism, Add Tags
Add to My Group(s)
Go To Commenting
The views expressed herein are the sole responsibility of the author and do not necessarily reflect those of this website or its editors.