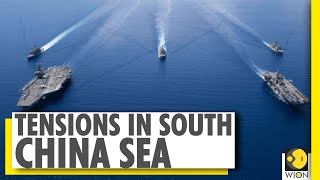 Image of two US aircraft carrier groups in the South China Sea set to begin round the clock war games. At the same time China is to conduct its own war games.

Sometimes there's a report which reveals a dark cloud may be on the horizon.

According to several sources including the Wall Street Journal, CNN and The World Socialist Web Site the US Navy has two aircraft carrier groups about to conduct round the clock war games starting tomorrow in the South China Sea.

Coincidentally, China had long planned to conduct its own war games this weekend as well.

Only a fool would interpret this as simply coincidence on the part of the US. No this is intentional in an area China regards as its sphere of influence. Just imagine Chinese war ships conducting war games in the Gulf of Mexico.

As we know the US Navy has been conducting what it calls "Freedom of navigation" patrols in the South China Sea for years which is just an updated version of the old "gunboat diplomacy" the US conducted in China that ended when Mao took control of the country in 1949.

However these US war games are far more than that considering the close proximity of the antagonists.

By putting adversaries in close proximity to each others' naval war games forces, what's the chances of an incident, even an accident occurring? What happens if a missile fired goes off course and hits the others forces? Sailors could be killed. This could be interpreted by the other as intentional. Then what? Retaliation? A reciprocal response by the other? The situation could unravel.

Questions abound. Why now? What's behind it?

The US presidential election is just 4 months away. Is Trump trying to divert attention away from his mishandling Covid-19, the economy in dire straits. The polls show he's in trouble even against someone as sorry as Biden. A "wag the dog" war diversion against the demonized China?

Retired. The author of "DECEIT AND EXCESS IN AMERICA, HOW THE MONEYED INTERESTS HAVE STOLEN AMERICA AND HOW WE CAN GET IT BACK", Authorhouse, 2009
Related Topic(s): China; Pentagon; Tariffs; Trade, Add Tags
Add to My Group(s)
Go To Commenting
The views expressed herein are the sole responsibility of the author and do not necessarily reflect those of this website or its editors.