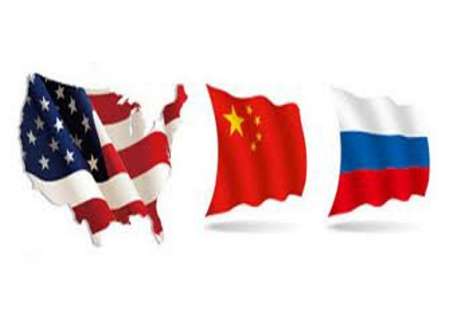 China's Belt and Road Initiative A Tectonic Shift in the Geopolitical Balance of Power
(Image by irna.ir)   Details   DMCA

Two countries are embroiled in a ferocious rivalry. One country's meteoric growth has put it on a path to become the world's biggest economic superpower while the other country appears to be slipping into irreversible decline. Which country will lead the world into the future?

Country A builds factories and plants, it employees zillions of people who manufacture things, it launches massive infrastructure programs, paves millions of miles of highways and roads, opens new sea lanes, vastly expands its high-speed rail network, and pumps profits back into productive operations that turbo-charge its economy and bolster its stature among the nations of the world.

Country B has the finest military in the world, it has more than 800 bases scattered across the planet, and spends more on weapons systems and war-making than all the other nations combined. Country B has gutted its industrial core, hollowed out its factory base, allowed its vital infrastructure to crumble, outsourced millions of jobs, off-shored thousands of businesses, plunged the center of the country into permanent recession, delivered control of its economy to the Central Bank, and recycled 96 percent of its corporate and financial profits into a stock buyback scam that sucks critical capital out of the economy and into the pockets of corrupt Wall Street plutocrats whose voracious greed is pushing the world towards another catastrophic meltdown.

China's Belt and Road Initiative: A Tectonic Shift in the Geopolitical Balance of Power

Over the weekend, more than 5,000 delegates from across the world met in Beijing for The Second Belt and Road Forum For International Cooperation. The conference provided an opportunity for public and private investors to learn more about Xi Jinping's "signature infrastructure project" that is reshaping trade relations across Europe, Asia, Latin America and Africa. According to journalist Pepe Escobar, "The BRI is now supported by no less than 126 states and territories, plus a host of international organizations" and will involve "six major connectivity corridors spanning Eurasia. "The massive development project is one of the largest infrastructure and investment projects in history, including 65% of the world's population and 40% of the global gross domestic product as of 2017." (Wikipedia). The improvements to road, rail and sea routes will vastly increase connectivity, lower shipping costs, boost productivity, and enhance widespread prosperity. The BRI is China's attempt to replace the crumbling post-WW2 "liberal" order with a system that respects the rights of sovereign nations, rejects unilateralism, and relies on market-based principles to effect a more equitable distribution of wealth. The Belt and Road Initiative is China's blueprint for a New World Order. It is the face of 21st century capitalism.

The prestigious event in Beijing was barely covered by the western media which sees the project as a looming threat to US plans to pivot to Asia and become the dominant player in the most prosperous and populous region in the world. Growing international support for the Chinese roadmap suggests that Washington's hegemonic ambitions are likely to be short-circuited by an aggressive development agenda that eclipses anything the US is currently doing or plans to do in the foreseeable future.

The Chinese plan will funnel trillions of dollars into state of the art transportation projects that draw the continents closer together in a webbing of high-speed rail and energy pipelines (Russia). Far-flung locations in Central Asia will be modernized while standards of living will steadily rise. By creating an integrated economic space, in which low tariffs and the free flow of capital help to promote investment, the BRI initiative will produce the world's biggest free trade zone, a common market in which business is transacted in Chinese or EU currency. There will be no need to trade in USD's despite the dollar's historic role as the world's reserve currency. The shift in currencies will inevitably increase the flow of dollars back to the United States increasing the already-ginormous $22 trillion dollar National Debt while precipitating an excruciating period of adjustment.

Chinese and Russian leaders are taking steps to "harmonize" their two economic initiatives, the Belt and Road and the Eurasian Economic Union (EAEU). This will be a challenging task as the expansion of infrastructure implies compatibility between leaders, mutual security guarantees, new rules and regulations for the common economic space, and supranational political structures to oversee trade, tariffs, foreign investment and immigration. Despite the hurtles, both Putin and Xi appear to be fully committed to their vision of economic integration which they see as based on the "unconditional adherence to the primacy of national sovereignty and the central role of the United Nations."

It comes at no surprise that US power brokers see Putin's plan as a significant threat to their regional ambitions, in fact, former Secretary of State Hillary Clinton admitted as much in 2012 when she said, "It's going to be called a customs union, it will be called the Eurasian Union and all of that, but let's make no mistake about it. We know what the goal is and we are trying to figure out effective ways to slow down or prevent it." Washington opposes any free trade project in which it is excluded or cannot control. Both the EEU and the BRI fall into that category.

The United States continues to demonize countries that simply want to use the market to improve the lives of their people and increase their prospects for prosperity. Washington's hostile approach is both misguided and counterproductive. Competition should be seen as a way to improve productivity and lower costs, not as a threat to over-bloated, inefficient industries that have outlived their usefulness. Here's an excerpt from an article that Putin wrote in 2011. It helps to show that Putin is not the scheming tyrant he is made out to be in the western media, but a free market capitalist who enthusiastically supports globalization:

"For the first time in the history of humanity, the world is becoming truly global, in both politics and economics. A central part of this globalization is the growing importance of the Asia-Pacific region as compared to the Euro-Atlantic world in the global economy. Asia's rise is lifting with it the economies of countries outside Asia that have managed to latch onto the "Asian economic engine"".The US has also effectively hitched itself to this "engine", creating an economic and financial network with China and other countries in the region"

The "super continent" of Eurasia is home to two-thirds of the world's population and produces over 60 percent of its economic output. Because of the dramatic opening of China and the former Soviet Union to the world, almost all the countries in Eurasia are becoming more economically, politically, and culturally interdependent. "