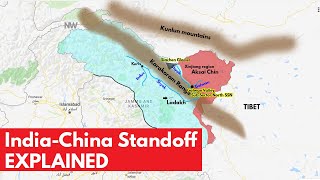 "We must remind the Indian side that China's national strength, including its military strength, is much stronger than India's. Although China and India are both great powers, when it comes to the ultimate competition of combat capability, the Indian side will lose. If a border war starts, India will have no chance of winning", the Global Times said Saturday.

Commenting on Friday's talks in Moscow between Chinese Defense Minister Wei Fenghe with his Indian counterpart Rajnath Singh on the sidelines of the Shanghai Cooperation Organization (SCO), the Global Times said the meeting between Wei and Singh laid an important foundation for the meeting between the two foreign ministers.

India bears full responsibility for the current China-India border tensions and China's military is fully determined, capable and confident to safeguard China's sovereignty and territorial integrity, and not an inch of Chinese territory can be lost, Wei Fenghe told Rajnath Singh.

The complex border issue between China and India cannot be resolved in one meeting, but the role of the two defense ministers will be crucial in cooling border frictions, the Global Times said adding:

"China and India are both big powers that have the capacity to mobilize national forces to support a military conflict in the border areas, but at this moment both sides need to calm down and clarify two major issues.

"First, China and India have not yet demarcated their borders and the Line of Actual Control (LAC) shouldn't be subject to constant change and different interpretations. The LAC of November 7, 1959 should be the base for both sides.

"If both sides want to create a new LAC on their own, and the will of the two major powers were to collide, the result would be disastrous. If both countries use their national power to support this collision indefinitely, it will lead to war, and the scale of the war may not be controlled near the LAC, resulting in a tragic loss of both countries' power, including the lives of their soldiers.

"Second, both China and India are emerging economies committed to economic and social development and have their own arduous tasks at home. Whether the two countries are partners or enemies has a completely different impact on their respective development ambitions. Although the boundary issue is difficult, it should not be the theme of China-India relations. It should be the common wisdom of the two major countries.

"The China-India boundary issue, which had been dormant for decades, has become "an active volcano" again in recent years, and it should not be. Before delimiting the border, it should be a common goal for both countries to manage the border issue by letting the disputes become "dormant" between the two sides again."

The problem now is that India has drawn an aggressive line on the border issue, misinterpreting China's desire to maintain peace and stability on the border as a weakness that can be exploited by threatening to wage a border war "at any cost," according to the Global Times.

Some in New Delhi also believe that the US' suppression of China and support for India has increased India's strategic strength and provided it with additional capital for risky adventure along the China-India border. This miscalculation has led it to a series arrogant and reckless moves on the China-India border issue, the paper said.

Indian media reported that Chinese Defense Minister Wei Fenghe "has sought" a meeting with his Indian counterpart Rajnath Singh in Moscow and the embassies of the two sides are working on this.

Author and journalist. Author of Islamic Pakistan: Illusions & Reality; Islam in the Post-Cold War Era; Islam & Modernism; Islam & Muslims in the Post-9/11 America. Currently working as free lance journalist. Executive Editor of American (more...)
Related Topic(s): China; Disinformation; Galwan Valley; Global Times; India; Ladakh; Media; Rajnath; Standoff, Add Tags
Add to My Group(s)
Go To Commenting
The views expressed herein are the sole responsibility of the author and do not necessarily reflect those of this website or its editors.