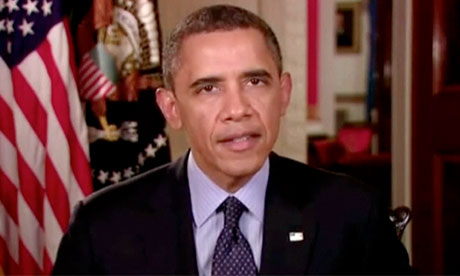 The most extremist power any political leader can assert is the power to target his own citizens for execution without any charges or due process, far from any battlefield. The Obama administration has not only asserted exactly that power in theory, but has exercised it in practice. In September 2011, it killed US citizen Anwar Awlaki in a drone strike in  Yemen , along with US citizen Samir Khan, and then, in circumstances that are still unexplained, two weeks later,  killed Awlaki's 16-year-old American son Abdulrahman  with a separate drone strike in Yemen.

Since then, senior Obama officials including Attorney General Eric Holder and John Brennan, Obama's top terrorism adviser and his current nominee to lead the CIA, have explicitly argued that the president is and should be vested with this power. Meanwhile, a Washington Post article from October reported that the administration is formally institutionalizing this president's power to decide who dies under the Orwellian title "disposition matrix."

When the New York Times back in April, 2010 first confirmed the existence of Obama's hit list, it made clear just what an extremist power this is, noting: "It is extremely rare, if not unprecedented, for an American to be approved for targeted killing." The NYT quoted a Bush intelligence official as saying "he did not know of any American who was approved for targeted killing under the former president." When the existence of Obama's hit list was first reported several months earlier by the Washington Post's Dana Priest, she wrote that the "list includes three Americans."

What has made these actions all the more radical is the absolute secrecy with which Obama has draped all of this. Not only is the entire process carried out solely within the Executive branch -- with no checks or oversight of any kind -- but there is zero transparency and zero accountability. The president's underlings compile their proposed lists of who should be executed, and the president -- at a charming weekly event dubbed by White House aides as "Terror Tuesday" -- then chooses from "baseball cards" and decrees in total secrecy who should die. The power of accuser, prosecutor, judge, jury, and executioner are all consolidated in this one man, and those powers are exercised in the dark.

Related Topic(s): Assassinate; Assassination; Citizens; Legal Abuse; Obama Administration; Obama Attacks Democracy; Obama Justice Dept; Obama Like Bush; Politics, Add Tags
Add to My Group(s)
Go To Commenting
The views expressed herein are the sole responsibility of the author and do not necessarily reflect those of this website or its editors.