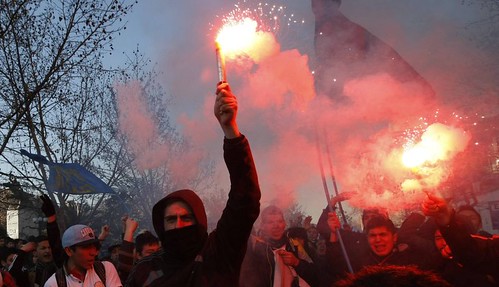 For the past month the streets of every major Chilean city have seen angry demonstrations, with as many as a million per day marching in the capital, Santiago. Soldiers and tanks have been deployed against protesters, thousands have been arrested and at least 23 have been killed. The demonstrations were sparked by an increase in already expensive subway fares, but quickly evolved into protests against neoliberal economic policies. The chaos and violence led the government to cancel the Asia-Pacific trade conference scheduled for November 11-17, as well as the December 2-13 U.N. climate-change conference.

Neo liberalism is not a new form of liberalism. In fact, it originated as a principled rejection of New Deal liberalism, harking back to 19th-century 'classical' liberalism, which emphasized individual freedom and rights over against the coercive power of government. Neoliberals, such as Friedrich Hayek and Milton Friedman, saw the totalitarian regimes of Stalin and Hitler as fulfilling the same authoritarian impulse that was driving the formation of welfare states in the U.S. and postwar western Europe. For them society itself is a market, and the prime instance of human freedom is the act of buying or selling independent of any coercion (including by government).

From this viewpoint, regulation of markets is a restriction of freedom. Labor unions interfere with the freedom of employers and workers to buy and sell labor. Goods, services and institutions such as education, health care and transportation should as far as possible be privately owned (to avoid government coercion). Neoliberals believe that competition for profit in a free market liberates the creative abilities of the best and brightest and benefits society far more than government programs.

Similar effects occur in Ecuador and Argentina. But there is something special about the story in Chile, where these policies were imposed through a U.S.-supported military coup in 1973 that installed the brutal dictatorship of Augusto Pinochet. They are the same policies that our ruling class wants to inflict on us, with enthusiastic help from the GOP and token resistance from centrist Democrats.

In 1970 Salvador Allende, head of a Popular Unity coalition of socialists and communists, was elected president. He tried to implement what he called a "Chilean Road to Socialism" that included nationalized health care, badly needed land redistribution, support for worker cooperatives, and nationalization of copper mines (Chile's most valuable export). As prominent Latin American scholar Roger Burbach explained, Allende's socialism was based on democratic principles, "all within the framework of the Chilean constitution." It presented an alternative to the authoritarian state socialism of the Soviet Union.

This immediately drew the hostile attention of the U.S. government. President Nixon told his operatives to "make the [Chilean] economy scream." He authorized an intense campaign of economic and political sabotage. The CIA funneled money to right-wing parties and fomented the hostility of the middle and upper classes to Allende's redistributive policies. The U.S. military cultivated a close relationship with their counterparts in Chile. (This is the same playbook now being followed all over Central and South America; e.g., Nicaragua, Venezuela and Brazil.)

In the congressional elections of March 1973, Allende's Unidad Popular received an even greater share of the popular vote than in 1970. E. Bradford Burns, a well-known Latin American historian, was in Santiago on September 4, 1973, watching as "more than 800,000 Chileans parade[d] past the Presidential palace, enthusiastically cheering President Salvador Allende. One week later President Allende was dead, the palace lay a burned-out shambles, the streets of Santiago echoed to the boots of soldiers and the rattling of machine guns."

Pinochet's dictatorship lasted until 1990, after which Pinochet remained as commander-in-chief of the army until 1998. As of 2011, Chile has officially recognized a total number of 40,018 killed, tortured or imprisoned for political reasons during the dictatorship, including 3065 who were killed or made to disappear.

Before his assassination in Washington DC in 1976, Orlando Letelier, Allende's Minister of Foreign Affairs, wrote a brilliant analysis of the disaster that overtook the Chilean economy. He explained that a team of Chilean economists trained at the University of Chicago by Milton Friedman immediately joined with Pinochet to make Chile a laboratory for neoliberalism. The "Chicago boys" had received CIA funds to prepare a 300-page economic blueprint that was given to military leaders before the coup.

They implemented "a total free market policy in a framework of extreme inequality among the economic agents involved: inequality between monopolistic and small and medium entrepreneurs; inequality between the owners of capital and those who own only their capacity to work, etc. Similar situations would exist if the model were applied to any other underdeveloped, dependent economy." All that buying and selling in a neoliberal jungle without government redistribution or labor unions amounts to the strong getting stronger by imposing on the weak. It is a recipe for increasing economic inequality that Chileans are now fighting.

Bipartisan American foreign policy in Latin America continues to be opposition to any regime that wants to implement its version of the New Deal or a European welfare state. As John Bolton said in a speech to a group of Cuban Americans a year ago: the U.S. is once again battling "the destructive forces of oppression, socialism, and totalitarianism." (Notice the implicit equation of "socialism" with communism.) There seems to be a tacit consent among Americans that only neoliberal economies are safe to have in our hemisphere. What would the ruling class supporting these policies do here if it could?

Related Topic(s): American Capitalism; American Foreign Policy; Freedom; Ideology; Ideology Liberal; Inequality; Markets; Socialism, Add Tags
Add to My Group(s)
Go To Commenting
The views expressed herein are the sole responsibility of the author and do not necessarily reflect those of this website or its editors.