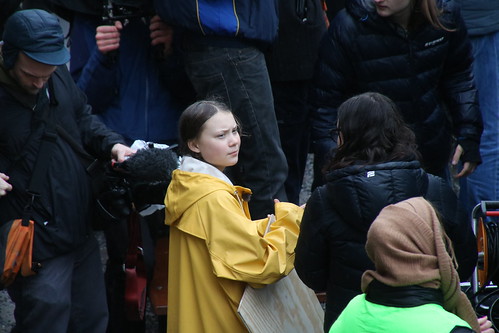 "Our children are the messengers we will send to a future we will never see", is one of the memorable quotes of Elijah Cummings, the Congressman from Baltimore, who died recently after years of being involved in social justice issues. That is a concept that has been presented in many ways before and is at the forefront of the call to action for the new environmental realities we face as a human race.

While we are caught up in political turmoil, wars, refugee problems, impeachment issues, those who control the policies and direction of this nation are hard at work institutionalizing their power and control. That direction is still under the constant influence and domination of an economic elite who threaten to control our future and sell that future off to the highest bidder, merely to increase their already obscene wealth.

That economic aristocracy apparently thinks that their children will somehow escape the fate of ordinary human beings because of some elaborate escape plan their parents can finance. But, like the law of gravity, what goes up must someday come down, just as some things are universal. Ultimately, we are all in this predicament together. All of the entitlement the economic elite believe they deserve will not save them in the end and will be the death of us all if we allow it to continue.

As humans we understand that our children are the future of the human race. And we know that if we do not leave them with a sustainable planet on which they can survive we will have failed miserably in our most basic task. Not only that, but we send them into their future with a message of hopelessness and destruction. To survive without a positive message, they will not only have to create a message of hope for their future, they will also have to undo the destructiveness of the message we have left them with. And all of this will need to happen within a very small window before the lights begin to go out for the human race.

The planet will survive without us. We, however, cannot survive without the planet. We must turn away from the failed and destructive leadership of that economic elite who are leading to this threshold of extinction.

Will we find the courage, the gumption, to join the youth, the Greta Thunbergs who are stepping up to replace the void of governmental leadership? There have been many adults who have been on that path for a lifetime, and more who have already joined or are ready to join now, just waiting for an opportunity. It is crucial that we form a grassroots community of concern and raise our voices for a survivable future for our children on this planet.

As we get older, we must see that our leadership and our courageous sacrifices, our willingness to commit all of our resources to a sustainable future, are the only gifts worth giving. What would we hold back? And why would we betray our children and their future in that way?

What is it worth to us to assure a future for our children? As human beings, we used to be willing to make great sacrifices to assure a better future for our children, knowing that the fate of the society depended upon doing that. Have we been so corrupted by the lure of money that we are now willing to leave the next generation stranded on nearly barren ground, with hope dwindling?

Let our children, our hope for the future, walk forward with a message that we not only cared deeply for them, but that we also acted to begin the necessary changes and that we armed them with effective tools and strategies to support a hopeful message of human triumph and sustainability.

They are ready. Are we willing?

Related Topic(s): Adults; Attention; Children; Community; Courage; Future; Giving; GrassRoots; Justice; Power; (more...) Strategies; Tools, Add Tags  (less...)
Add to My Group(s)
Go To Commenting
The views expressed herein are the sole responsibility of the author and do not necessarily reflect those of this website or its editors.