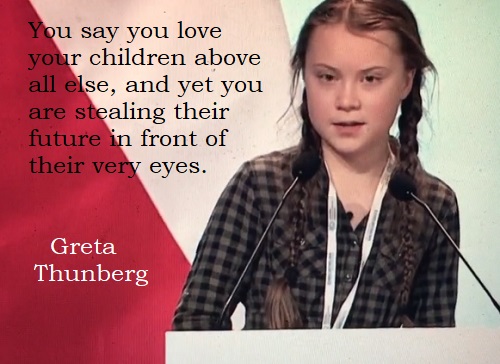 "Americans are finally beginning waking up to the existential threat that the climate emergency poses to our society."

"It's young people that have been primarily responsible for that."

As the climate is changing, so are the winds.

And it is this country's youth leading that change.

A Senate climate crisis task force this week praised young activists for being so outspoken about the climate crisis. Thunberg, however, made it clear to lawmakers she was not interested in their platitudes, saying:

"Please save your praise. We don't want it. Don't invite us here to just tell us how inspiring we are without actually doing anything about it because it doesn't lead to anything.

"If you want advice for what you should do, invite scientists, ask scientists for their expertise. We don't want to be heard. We want the science to be heard."

Thunberg pulled no punches when articulating the urgency the present climate crisis presents.

Highlighting the fact there is no more time for dithering and our politicians are failing to adequately address the climate emergency, Thunberg scolded:

"I know you are trying but just not hard enough. Sorry."

"We need your leadership. Young people are the army politically, which has arrived in the United States. You put a spotlight on this issue in a way that it has never been before. And that is creating a new X factor. We hear you. We hear what you're saying and we will redouble our efforts."

Related Topic(s): Children; Climate Change; Democracy; Future; Health; IPCC; People, Add Tags
Add to My Group(s)
Go To Commenting
The views expressed herein are the sole responsibility of the author and do not necessarily reflect those of this website or its editors.