Chicken Little
(Image by AJC1)   Details   DMCA
You can imagine what a shock it was to my republican, self-made, wealthy, North Carolina father-in-law when his oldest daughter married a Yankee whose outlook was formed by anarchists and socialists, and who believed (and still does) that social class is the major source of evil in the world. In defense of his lifestyle and beliefs my father-in-law once said "It wouldn't do any good to redistribute the wealth. The smart ones would just take it away from the stupid ones." He was not entirely wrong. Given our present system, and enough time, those with a combination of cunning and a somewhat sociopathic disregard for the needs of others would probably regain their wealth. The key factor in this prophesy is, of course, "given the present system". We will come to that,

Some years ago I went to a football game that was between two local high school teams. One was from a public school in a small mill-town. Call it the Mill Team. Most of the players' fathers were woods-workers, and many of the members of the team would have been in line for a similar kind of work when they matured. They were big and rough, and not, for the most part, academically inclined. The other team was a private school. Their fathers, with few exceptions, were managers and white-collar professionals. Call them the Private Team. They were better than average in their academic skills or they would not have been attending that school.

The Mill Team used an assortment of straight-forward, standard plays. The Private Team used very complex and clever plays. They were probably the original creation of their phys-ed instructor.

It was hardly a competition. The Mill Team won easily. When the game was over, one could feel the sense of humiliation in the bleachers of the Private Team, but then they began to chant:"

You'll work for us some day!

And confident in the certainty of their eventual superiority, they licked their wounds and went home.

That's social class in America. In this essay I'd like to explore some of the consequences of living in a system like that for people who are not academically inclined.

To rise to the top of a corporation or bank in the United States requires both sociopathy and cunning. That a degree of sociopathy is a prerequisite if one is going to rise to the top in a capitalistic system seems self-evident to me, so there is no need to dwell on that. But let's examine the "cunning" factor in a bit more detail.

More effort is not always sufficient for rising to the top in school, or business, or in any other endeavor. I recall one of the few baskets I ever made in my short-lived basketball career. I must have been eight or nine years old, and we were a neighborhood team that was pulled together to play the team of some sort of club in the area. I don't recall who they were, but they actually had a coach who taught them something. I stole the ball, dribbled down the court, and made a basket. Unfortunately it was the wrong basket. I spent the rest of the game on the bench. True, I had not had any formal training, but the reality was that no amount of training was going to turn me into a formidable basketball player. Nor was making a greater effort going to help much. I was lacking both height and talent.

A person's IQ is far from an accurate measure of his or her overall intelligence, but it probably does provide a rough indication of what I am calling "academic intelligence." By academic intelligence I refer to those kinds of intelligence that enable a person to do well in school mostly the memorizing of lots of facts and the ability to learn how to read with comprehension. Academic intelligence, like most human attributes, can be plotted on a bell-shaped curve. Very early on in their school careers students get placed on this curve in the minds of the teachers who are dealing with them and to an extent in their own minds and the minds of other students as well. It looks something like this: 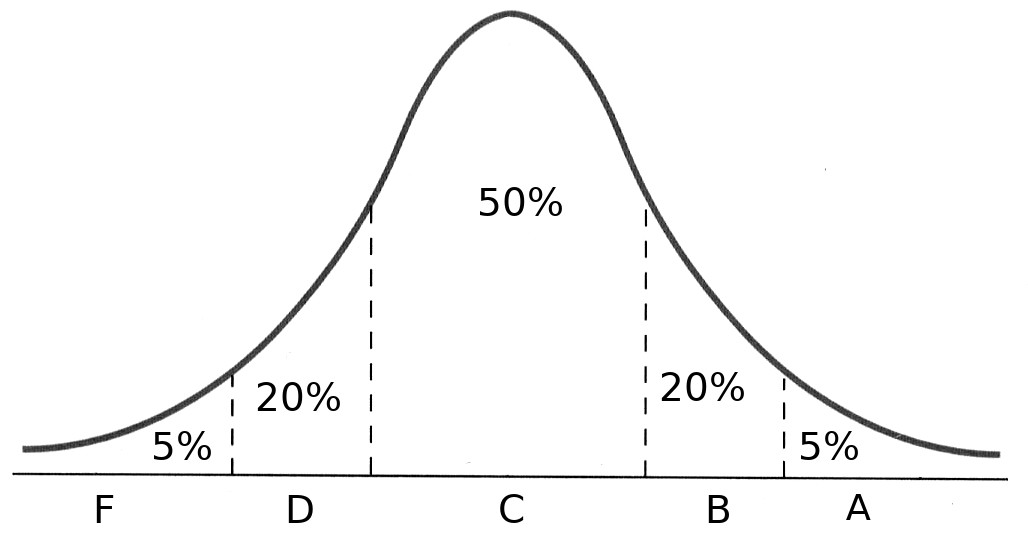 D Group
(Image by Jim Hunter)   Details   DMCA
This little diagram is not meant to be an accurate scientific description of these groups. In the first place in the real world boundaries are actually a bit blurry. Also the dividing lines I have here do not represent anything so scientific as the points where standard-deviation groups begin and end. Here's what the diagram is meant to capture: The A group consists of those students who excel who arrive at the top of their classes without really making much of an effort. They are the ones destined for extremely well-paying jobs in our society. We'll touch on how much better paying in a moment. The B group are the ones who can make the honor roll if they really work. They will also have high-paying jobs but will probably never be the top CEOs. The C group are those with more or less average academic intelligence. They will eke by if they tend to business, and if two of them head up a family, their combined wages might constitute a "living wage." If they head a single-parent family they are going to be struggling at best. Jumping over the D group, the F group won't succeed in ordinary schools, but everybody can see that, so they are defined as having a disability and sent to special facilities where their basic needs are sometimes met fairly well. Then, coming back to the D group, they are, to put it simply, those who will never do well in school, and who are destined for failure in life both men and women, but especially the men.

In this essay I am focusing on the men and boys in the D group. Women in the D group also have difficult lives, but their situation, at least in some respects, is different, and some of the things I will be saying don't apply to them. As I see it, the D-men group whether its members are black, white or Hispanic is the most disadvantaged group in our society. (Race is a factor, but a secondary one.)

Write for Politics of Health and work with David Werner on issues of health. Worked in the field of "Mental Health" all my life. Am now retired. Jim
Related Topic(s): Anarchists; Class; Corporations; Corporations; Elections; Green; Men; Racism; Republican; Women, Add Tags
Add to My Group(s)
Go To Commenting
The views expressed herein are the sole responsibility of the author and do not necessarily reflect those of this website or its editors.