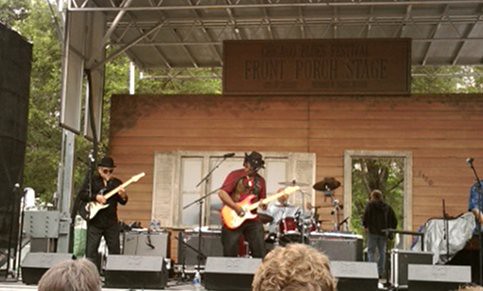 Four years I had been attending college in Chicago yet all those four years I never once was able to get to the Chicago Blues Fest. (Cue blues guitar riff.)

But, that changed yesterday. I made certain that I would get to hear a slice of what the Chicago Blues had to offer a young person with ears receptive to all different kinds of sounds with varying pitches, timbres, and tones interwoven to produce what we all know as music.

Sunday afternoon I caught the tail end of Ramblin' Jack Elliott. Elliott was there for his folk blues-style. He also is a legend, a real musical cowboy who talked of the good old days when people only listened to radio and remarked in between songs that he never much liked the urban city.

I immediately noticed that Elliot influenced Bob Dylan. In fact, Elliot performed one of his songs Dylan has recorded a version of, "Diamond Joe." It's a song with lyrics that go like this: "Now there's a man you'll hear about/Most anywhere you go/And his holdings are in Texas/And his name is Diamond Joe."

"And he carries all his money/In a diamond-studded jar/He never took much trouble/With the process of the law." It is a song with an outlaw country-edge to it. And, as it came to a close, Elliott sang the lyrics, "And when I'm called up yonder/And it's my time to go/Give my blankets to my buddies/Give the fleas to Diamond Joe." Repeating "fleas" over and over again.

Elliott was a nice little diversion from the Chicago Blues, but following Elliott, there was no messing around anymore. Just straight-edged electric guitar blues from Guitar Shorty, a 70 year old man who may have lost some of the agility he used to incorporate into his act but who still can back up the claim that he influenced Jimi Hendrix and Buddy Guy.

Kevin Gosztola is managing editor of Shadowproof Press. He also produces and co-hosts the weekly podcast, "Unauthorized Disclosure." He was an editor for OpEdNews.com
Related Topic(s): Artists; Blues; Chicago; Music; Music, Add Tags
Add to My Group(s)
Go To Commenting
The views expressed herein are the sole responsibility of the author and do not necessarily reflect those of this website or its editors.