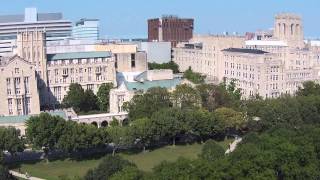 I spent four years in Chicago in the early sixties as a student at the University of Chicago.

I've said this before, and I'll say it again. Those four years in Chicago were an extraordinary time for me and very much shaped my worldview and what I wanted to do with my life.

I should also say that while the University of Chicago was and is one of the great higher education institutions in this country, the truth is that I learned a lot more off campus than I did in classrooms.

As someone who came from a working class family, Chicago provided me, for the first time in my life, the opportunity to put two and two together in understanding how the real world worked. To understand what power was about in this country and who the people were who had that power. To learn a little bit about the causation of wars; to learn about racism and poverty and other social ills.

My years in Chicago gave me the opportunity to become involved in the civil rights movement, in the labor movement, in the peace movement and in electoral politics experiences that significantly shaped my life.

As a student at the University of Chicago, I became involved with a civil rights organization called the Congress on Racial Equality -- CORE -- one of the leading civil rights groups of that period.

Now, some of you may not know this, but in the early 1960s, the University of Chicago owned segregated housing.

Being audacious young people, black and white, our chapter of CORE wanted to expose that unjust housing system. And so our CORE chapter sent white couples and black couples into the university-owned housing to pretend to look for an apartment. And you can guess what happened.

When the black couples showed up, there were just no apartments available. But a few hours later, when one of our white couples went in, somehow, mysteriously, they would have their choice of apartments.

After documenting this clear pattern of racial discrimination, the students in CORE demanded the university desegregate its housing. When they refused, we staged one of the first ever civil rights sit-ins in the North, forcing the university to acknowledge the situation and to consider serious policy changes.

While what we were doing here in Chicago at the time was significant, it came nowhere close to what young people our age were doing in the South in groups like SNCC, the Student Nonviolent Coordinating Committee. We were protesting but they were putting their lives on the line, and some were getting killed.

In 1963 I, along with a busload of other students, took a 600-mile ride from Chicago to Washington, D.C. for what remains in my mind as an unforgettable day. We went to the nation's capital to participate in the March on Washington for Jobs and Freedom, led by the Reverend Dr. Martin Luther King, Jr., one of the great leaders in American history. I had the honor of being there to hear him deliver his now-famous "I Have A Dream" speech, and that was a day I have never forgotten.

That same year, we knew we had more to do in Chicago.

It had been nine years since the Brown vs Board of Education decision, but the school officials in Chicago had still refused to meaningfully desegregate the city's public schools. Black schools were overcrowded and underfunded, with many students forced to share chairs and desks. Meanwhile, a report at the time found over 380 white classrooms were completely empty.

But instead of putting black children in those empty classrooms, the school officials decided to put old trailers on the black school grounds. We called them "Willis Wagons," after the Chicago school superintendent of that time, Benjamin Willis.

These trailers were a monstrosity. Students would boil in the heat, and freeze in the cold. They were infested with rats. They were an insult and a disgrace and the community fought back.

Related Topic(s): Chicago Police; Chicago Politics; Jobs; Life-Home-Family; Racism, Add Tags
Add to My Group(s)
Go To Commenting
The views expressed herein are the sole responsibility of the author and do not necessarily reflect those of this website or its editors.