"Adding to this pain, was the fact that COTW's colonizing aggression was taking place during a pandemic"It was a cruel place to be in, but then charter schools are never shy in creating opportunities out of other people's hardships and struggles, even during Covid." - Angie Romo

When the Citizens of the World (COTW) chain of charter schools requested space at Bassett Street Elementary School under California's PROP-39, they knew the damage this would cause to the students. After all, representatives from these publicly funded private schools had toured the campus under false pretenses and mapped out the rooms that they wanted. They saw that this space was not empty but was being used to provide services to children with special education needs, house green-screen and special effects facilities for a media-arts magnet program, and allow an award-winning robotics program to operate. COTW pressed on with their plans to push these students aside so that they could open the newest franchise in their nationwide chain.
While charter schools like COTW like to pretend that they were offering parents a choice, the proposed invasion of Bassett will destroy a brand new magnet program and other opportunities that made this school popular with parents in their neighborhood. These residents liked what their local public school offered their children and were willing to fight for it. They lobbied their local neighborhood council, spoke at LAUSD board meetings, and made their case directly to the governing board of COTW. These stakeholders were unrelenting warriors for their school.

(Image by Citizens of the World Charter Schools)   Details   DMCA
It appeared that the efforts of the stakeholders at Bassett had paid off when COTW announced on March 23, 2021, that they would begin operations next year at a private facility. This gave hope to students at Bassett who are depending on space for special education services, the media-arts magnet, and the robotics program. Unfortunately, these hopes were dashed in recent communications from the district.

Despite telling the community they "could not imagine a better place to start CWC East Valley" than the private facility and encouraging families to enroll in their school based on the "agreement", COTW is pressing on with their intention to take space from the children at Bassett. The charter school chain has notified the district that they will "occupy two fewer rooms than their entitlement at Bassett next year," but "the proposed co-location currently remains active." The LAUSD will, therefore, begin construction on the affected rooms. This will involve tearing out existing infrastructure using bond funding meant to improve public schools. 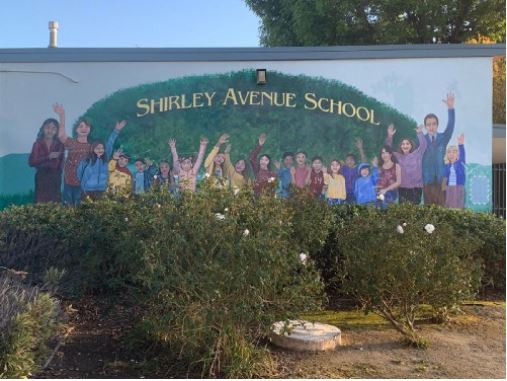 (Image by Carl J. Petersen)   Details   DMCA
COTW will also continue their occupation at Shirley Avenue Elementary School, which is located just a few miles to the west of Bassett. Despite the fact that the charter school chain says that it "had seven times more interest than space", only 135 students enrolled in the program on the Shirley campus last year. The administration had projected 234 students would attend and were, therefore, given nine classrooms. The shortfall in enrollment means that public school students were deprived of space that sat empty.

In the newest entry to the "Voices From The Community" series, LAUSD Teacher Angie Romo gives her thoughts on how COTW's actions harm students in a rectangular section of the valley that is considerably poorer than surrounding areas:

My 102-year-old grandmother was a visionary. In the 1940s she left rural Mexico with the idea that life in the San Fernando Valley would be better for her family. Even though there were legalized racist codes like Sundowner laws and Redlining, which kept non-white homeownership to specific areas, my grandmother still bet on the greater good in the Valley for her family as it transformed from citrus groves to neighborhoods.

My grandmother's vision has been my reality. I was born in San Fernando, attended CSUN, and raised two daughters with my husband in Porter Ranch. For the past 28 years, I have taught at Bassett Street Elementary in the part of Van Nuys that is now called Lake Balboa. I have been at Bassett long enough to have former students' sons and daughters in my class. I understand the legacy of this community and am dedicated to protecting it. For this reason, I feel duty-bound to call out self-serving players and their shameful practices when they are undermining the common good for all of us who call the San Fernando Valley home.

A few weeks ago, I wrote about Citizens of the World Charter and the 'location scouts' that lied to our school principal. It was all a ruse as there was no film. COTW scouted our school for their own benefit. This was confirmed when we got word from the district that the charter school wanted to use a misguided law (Prop 39) to bully their way on our campus."

Once informed all the teachers and staff at Bassett had to move fast. We reached out to our parents, many of whom do not speak English and have very low income and little resources. It was a painful moment in my professional life to explain to these parents how their children would lose classrooms and resources if COTW students, many from families with high incomes, were allowed to co-locate on the Bassett campus.

Explaining the Prop 39 law to non-white parents in 2021 felt like a modern-day version of informing non-white families in 1940 that they could not move into a neighborhood because of the Sundowner laws. Adding to this pain was the fact that this act of colonizing aggression by COTW was taking place during a pandemic. Bassett teachers and staff were already doing all we could to teach our students remotely under extraordinary and difficult circumstances. Now we were also being forced to defend our school while we were not even on the school campus.

We had limited time to fight this privately managed charter school. None of us knew how to begin the fight, but we knew we had to do it for our school's children. It was a cruel place to be in, but then charter schools are never shy in creating opportunities out of other people's hardships and struggles, even during Covid, and we were determined to win! 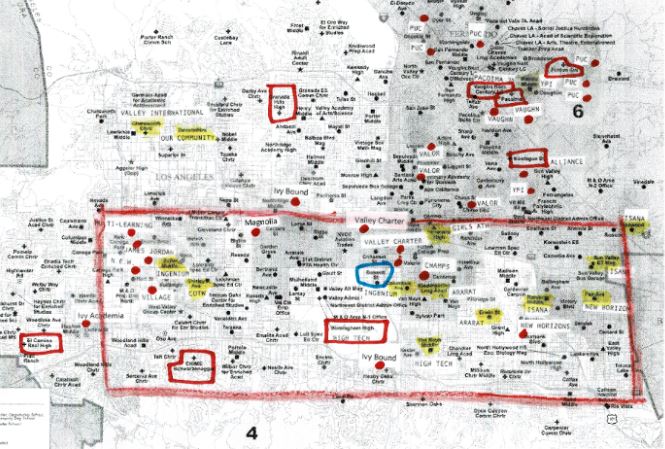 In the spring of 2020, while scrambling to deal with the COVID-19 lockdown imposed a few weeks earlier, the teachers at Shirley tried to fight off the COTW invasion. They were unable to mobilize support from their neighbors as the community and neighborhood councils in the rectangle were busy dealing with the pandemic and not paying attention to the impending crisis at their neighborhood public school. It is a cynical calculus that COTW and charter operators have capitalized on before; if no one is paying attention they can get away with whatever they want. In this case, it was a land grab at Shirley Elementary.

A distracted community who is just trying to get through their days has always worked to COTW and other charter schools' advantage. For example, a distracted community did not notice that this charter chain owes the students of the LAUSD $974,629.67. That of course should be a red flag to any community and certainly any landlord about a future tenant and yet they were able to get pieces of the Shirley campus from the LAUSD. It does beg the question of what is going on with COTW finances: Why is COTW unable to pay their bills? Is this indicative of a bleak financial future that may result in a shutdown of the schools in the middle of a semester?"

There are other charter schools that owe LAUSD money including Ingenium who owes $879,233 and New Horizon that owes the public school students of the LAUSD $1.26 million. What is the financial solvency of these schools and what happens if they fail? Alliance Charter has co-mingled public funding with their investor monies for years and is now shutting down their Alliance Baxter high school in San Pedro. Shocked teachers and families were left scrambling to figure out how their high schoolers could finish off their goals towards college. This is what happens when CEOs are a part of the education process

But more troubling last year we saw the callousness and pure greed of COTW and the other charter schools in the rectangle. In April of 2020, as the pandemic was assaulting the country and businesses were desperate to find financial relief, the Trump administration's education secretary Betsy Devos paved the way for private and charter schools to get PPP funding. This PPP funding was created to help small businesses. Charters Schools take public dollars and are not supposed to be businesses. Their proponents will insist that they are "public schools." Still privatizer Secretary Devos made sure charters had a soft-landing spot for the cold hard cash that should have gone to businesses in the country and in our rectangle.