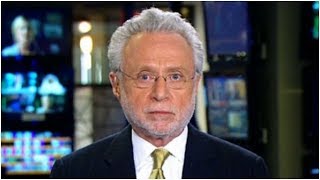 For a long time, liberalism and Zionism have gotten along fine in America -- just look at the Democratic Party and its love for Israel. But Charlottesville represents a crisis for liberal Zionists. When they condemn white nationalism in the U.S. and celebrate Jewish nationalism in Israel, the contradiction is obvious to all.

--Wolf Blitzer has condemned the "racism and hatred" of Charlottesville and his show has served that good cause.

But Blitzer once published a book in which he promoted one piece of Zionist propaganda after another and denounced Palestinian views of the conflict as "spurious myths." It is a "myth" that Arab civilians were "massacred" at Deir Yassin, a "myth" that Palestinian refugees "were the major victims of the 1948 war," and a "myth" that "Jewish atrocities" caused the Palestinians to flee. From Blitzer's book on the refugees:

"The startled Jewish community declared: 'We did not dispossess them; they themselves chose this course.'"

These are all grotesque falsehoods or distortions of the truth to deny war crimes, typical of AIPAC, the lobby group Blitzer was working for when he put the book out. (Deir Yassin was an Arab village on the outskirts of Jerusalem that Israeli militias cleared in April '48 for strategic and nationalist purposes, killing over 100 Palestinian civilians; the outrage caused terror throughout Jerusalem.)

To this day, Blitzer frequently airs Israel's defenders, rarely puts on its critics; and he attacked Jimmy Carter when he dared to say Israel was practicing apartheid.

Meanwhile, its president, Jeremy Ben-Ami, brags about his father's "service" in the Irgun establishing the state of Israel-- without noting that the Irgun was a terrorist Jewish militia, linked to the massacre of Palestinians in Deir Yassin and other ethnic cleansing operations.

--Josh Marshall of TPM has been a tribune of warnings about the real-and-present dangers of Trumpism:"a President driven by white racial grievance" has detonated a bomb of "white supremacist violence" hatred that will keep bursting.

Marshall is married to an Israeli and proudly named his son in 2006 after an Israeli general:

"His full name is Samuel Allon Marshall. ... The name means 'Oak' in Hebrew. And it was also the name of Yigal Allon, after whom he is also named, who was one of the founders of and later the commander of the Palmach, the elite commando unit of the Haganah, the predecessor of the IDF."

Yigal Allon was the general who carried out David Ben-Gurion's more-or-less explicit orders to expel Palestinians from the incipient state of Israel in 1948. Famously he emptied Lydda and other areas near the Israeli airport of Palestinians. "IDF commander Yigal Allon asked Ben Gurion 'what shall we do with the Arabs?' Ben-Gurion made a dismissive, energetic gesture with his hand and said, 'Expel them'." [John Pilger, and Ari Shavit too.]

Josh Marshall is wired inside the Democratic Party and tries to maintain order over Israel inside the party. He does so by avoiding the issue as much as he can lest it divide the base, by pointing out Israeli atrocities only when they're glaring, and when push comes to shove, characterizing anti-Zionism as anti-Semitism.

Philip Weiss is a longtime writer and journalist in New York. He co-edits a website on Israel/Palestine, Mondoweiss.net, which he founded in order to foster the movement for greater fairness and justice for Palestinians in American foreign policy. He is currently working on a novel about the US in Australia during WW2.
Related Topic(s): Anti-semitism; Israeli Pressure On US; Israeli_Propaganda; Palestinian; Zionists, Add Tags
Add to My Group(s)
Go To Commenting
The views expressed herein are the sole responsibility of the author and do not necessarily reflect those of this website or its editors.