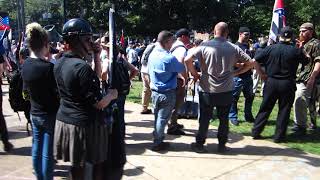 A shorter version of this piece appeared in The Conversation.

The march across the University of Virginia campus in the summer of 2017 by a thousand or more white supremacists, neo-Nazis, and other right-wing extremists offered a glimpse of the growing danger of authoritarian movements both in the United States and across the globe, signalling a danger that mimics the increasingly forgotten horrors of the 1930s. The image of hundreds of fascist thugs chanting anti-Semitic, racist, and white nationalist slogans such as "Heil Trump" and later attacking peaceful anti-racist counter-demonstrators makes clear that radical right-wing groups which historically have been on the margins of American society are now more comfortable in public with their nihilistic and dangerous politics. They appear especially emboldened to come out of the shadows because elements of their neo-fascist ideology have found a comfortable if not supportive place at the highest levels of the Trump administration, especially in the initial and telling presence of Steve Bannon, Jeff Sessions, and Stephen Miller, all of whom embrace elements of the nefarious racist ideology that was on full display in Charlottesville.

As is well-known, Trump has not only supported the presence and backing of white nationalists and white supremacists, but he has refused to denounce their Nazi slogans and violence in strong political and ethical terms, suggesting his own complicity with such movements. It should surprise no one that David Duke, a former imperial wizard of the Ku Klux Klan, told reporters in the midst of the events that the Unite the Right followers were "going to fulfill the promises of Donald Trump"to take our country back."

Nor should it surprise anyone that Trump initially refused to condemn the fascist groups behind the horrifying, shocking images and violence that took place in Charlottesville. His silence made elements of the far-right quite happy. For instance, The Daily Stormer, a white supremacist website, issued the following statement: "Refused to answer a question about White Nationalists supporting him. No condemnation at all. When asked to condemn, he just walked out of the room. Really, really good. God bless him."

It appears that the presence of Nazi and Confederate flags along with the horrendous history of millions lost to the Holocaust and slavery, lynchings, church bombings, and the assassination of Black leaders such as Medgar Evers and Martin Luther King, Jr. did little to move Trump to a serious understanding or repudiation of the poisonous historical forces that surfaced in Charlottesville.

The demonstration held in Charlottesville by militarized torch-bearing groups of Nazi sympathizers, Ku Klux Klan members, and white nationalists represents a historical moment that captures some of the elements of a past that led to some of the worse crimes in human history. At the risk of falling prey to historical amnesia, the crucial lesson to be learned is that the ideology, values, and institutions of a liberal democracy are once again under assault by those who no longer believe in equality, justice, and democracy. As the historian Timothy Snyder has observed, it is crucial to remember that the success of authoritarian regimes in Germany and other places succeeded, in part, because they were not stopped in the early stages of their development.

The events in Charlottesville provide a glimpse of authoritarianism on the rise and speak to the dark clouds that appear to be ushering in a new and dangerous historical moment both in the United States and across the globe. While it is problematic to assume that an American-style totalitarianism will soon become the norm in the United States, it is not unrealistic to recognize that the possibility for a return to authoritarianism is no longer the stuff of fantasy or hysterical paranoia, especially since its core elements of hatred, exclusion, racism, and white supremacy have been incorporated into both the highest levels of state power and throughout the mainstream right-wing media. The horrors of the past are real and the fears they produce about the present are the necessary work of both historical memory and the power of civic courage and moral responsibility.

The authoritarian drama unfolding across the United States has many registers and includes the use of state violence against immigrants, right-wing populist violence against mosques and synagogues, and attacks on Muslims, young blacks, and others who do not fit into the vile script of white nationalism. The violence in Charlottesville is but one register of a larger mirror of domestic terrorism and home-grown fascism that is growing in the United States.

Trump's irresponsible response to the violence in Charlottesville should surprise no one given the long history of racism in the Republican Party that extends from Nixon's Southern strategy and George W. Bush's treatment of the Black victims of Hurricane Katrina to the current party's efforts at voter suppression. Like many of his fellow Republican extremists, Trump embraces this long legacy of white supremacy, though he elevates it to a new level of visibility in his refusal to expunge its most naked expressions and his open support for its values and policies.

How else to explain his administration's announcement that it would no longer "investigate white nationalists, who have been responsible for a large share of violent hate crimes in the Unites States." How else to explain Trump's willingness to lift restrictions imposed by the Obama administration to provide local police departments with military surplus equipment such as armed vehicles, bulletproof vests, and grenade launchers. Clearly, such actions accelerate Trump's law and order agenda, escalate racial tensions in cities that are often treated like combat zones, and reinforce a warrior mentality among police officers.

More telling is Trump's presidential pardon of Joe Arpaio, the notorious White supremacist and disgraced former sheriff of Maricopa County, Ariz. Not only did Arpaio engage in racial profiling, despite being ordered by the court to decease, he also had a notorious reputation for abusing prisoners in his Tent City, which he once called "a concentration camp." These inmates were, among other practices, subjected to blistering heat, forced to work on chain gangs, wear pink underwear, and dress in demeaning striped uniforms.

There is more at work here than Trump's endorsement of white nationalism; there is also the sending of a clear message of support for a culture of violence that gives meaning to acts of domestic terrorism. Moreover, there is a clear contempt for the rule of law, and an endorsement not just for racist ideology but also for institutional racism and the primacy of the racially-based incarceration state. There is also the chilling implication that Trump would be willing to pardon those who might be found guilty in any upcoming investigations involving Trump and his administration. Trump's law-and-order regime represents a form of domestic terrorism because it is a policy of state violence designed to intimidate, threaten, harm, and instil fear in a particular community. Pardoning Arpaio, Trump signals to his right-wing extremist base and fellow politicians that he justifies state enacted violence against immigrants, especially Latinos. In addition, Trump's language of fear and violence emboldens right-wing extremists and gives them the green light to support legislation and ideologies that are profoundly reactionary. For instance, this is evident in attempts on the part of 20 states to criminalize dissent, overtly decry the benefits of higher education, and state without apology that Republicans would support postponing the 2020 election if Trump proposed it.

The events in Charlottesville raise serious questions about the role of higher education in a democracy. What role if not responsibility do universities have in the face of widespread legitimized violence? What role does education have at a time when rigorous knowledge is replaced by opinions, the truth is equated with fake news, self-interest replaces the social good, and language operates in the service of violence? Surely, institutions of higher education cannot limit their role to training at a time when democracy is under assault all over the globe. What does it mean for institutions of higher education to define themselves as a public good, a protective space for the promotion of democratic ideals, the social imagination, values, and the imperatives of critically engaged citizenship? As Jon Dixon observes, what does it mean to view and take responsibility for developing education as "a protected space within which to think against the grain of received opinion: a space to question and challenge, to imagine the world from different standpoints and perspectives, to reflect upon ourselves in relation to others and, in so doing, to understand what it means to assume responsibility"?

Surely, with the ongoing attack on civic literacy, truth, historical memory, and justice it becomes all the more imperative for colleges and universities to educate students to do more than learn work-based skills. What might it mean to educate them to become intelligent, compassionate, critically engaged citizens fully aware of the fact that without informed citizens there is no democracy? There is much more at stake here than protecting and opening the boundaries of free speech; there is the more crucial imperative of deepening and expanding the formative cultures and public spheres that make a democracy possible.

Related Topic(s): Democracy; Education; Immigrants; Reactionary; Universities, Add Tags
Add to My Group(s)
Go To Commenting
The views expressed herein are the sole responsibility of the author and do not necessarily reflect those of this website or its editors.