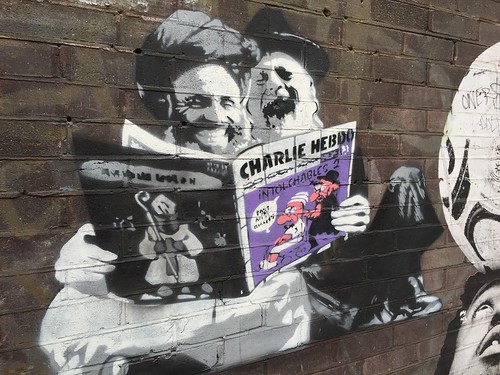 "All things considered, I'd rather be in Philadelphia Paris."

After having watched the bobbing pundits as they went round and round on the carousel of the media circus, reaching for that golden circular meme with effusions they hoped would become the two-day newscycle buzzword, you'd have thought it was Charlie Brown, not Charlie Hebdo, who violently "passed away" a while ago, along with Lionel, Lucy and Pigpen - finally gunned down by a Red Baron swooping in with a ululating allahu akbar, crescent moon notches sprucing up his fuselage.

Let sleeping dogmas lie, they say, but then someone woke the sleeper cells - all the crazies of Abraham: Bush, bin Laden, radical Zion - and now all Hell has broken loose, no one happier than the zealots going at it like three dueling banjoes in a film called No Deliverance.

I've tried to stay away from the Charlie fray, seeing in it the usual tragicomedy of wasted lives, of sardonic ink spilled in an Ironic Age for naught, the world become in so many ways a self-caricature souped-up on Google juice. Frankly, I didn't go with the handwringing flow on this catastrophe. Being the free-associative type (an oxymoronic expression if there ever was one), my first thought was: La Haine. The movie about hate and racism at work in the suburbs of Paris, whose violence left me feeling queasy when I watched it back in 1995. An Arab, a Jew and a Black, all friends, confront a police state on the local scale, like the residents of Ferguson.

But I also thought of France's recent Burqa showdown; recalled Libya and how France was the first to raise her hand when it came time to murdering Gaddafi. And thought of French colonialism in Arabia. Thought: even my favorite existentialist novel, Camus' The Stranger, features an Arab being rubbed out senselessly on a beach by a French nihilist. There's a lot of karma at work here.

As it often does, Black Agenda Report adds some clear and succinct perspective on matters of Otherness. Bruce Dixon points out that "If you actually want to understand why some fraction of Muslims saw gratuitous insult instead of satire when the French magazine Charlie Hebdo depicted the prophet Muhammad doing things you wouldn't want your own small children to see, or pregnant Muslims as 'Boko Haram sex slaves' howling for welfare checks, all you've got to do is look at is two bits of history." He then cites philosopher Karen Armstrong's observation that the notion of a separation of religion and state is a Western one, and that even in "modernized" Islamic states the separation has come not by consent but by force.

Of course, such a separation does not really exist even in the powerful West. In America, you are put through the ritual of swearing to God before taking the stand to bear witness in a court of law; money has the laughable slogan: In God We Trust. Even here in Australia, I was rather stunned a while back when I watched a session of Parliament open with members murmuring the Lord's Prayer. Obscenity?

Back in Europe, France is not the only nation with a growing intolerance toward Islam and its traditions, which are seen as hostile to the dominant Western culture they are embedded in, but it's a dangerously multiplying phenomenon as the rise of PEGIDA in Germany attests to. It makes one wonder: Is there a Kristallnacht for Islam on the horizon? Dixon is right to suggest that given the 'clash of civilizations' forced on Islam by Western catalytic actions, "In this context, unlike jokes exposing the foibles of the powerful, which are real satire, Charlie Hebdo, which is now subsidized by the French government is engaged in something much like war propaganda."

Related Topic(s): Charlie Hebdo; Fascist; Freedom Magazine; Funny; God; Hell; Humor; Hypocrite; Irony; Language; (more...) Muslims; Pundits; Satire; Violence, Add Tags  (less...)
Add to My Group(s)
Go To Commenting
The views expressed herein are the sole responsibility of the author and do not necessarily reflect those of this website or its editors.