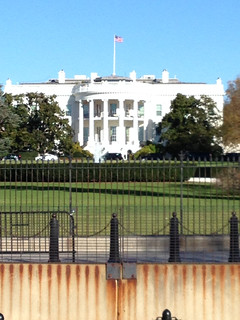 Front of the White House

Much of the turmoil in the Middle East seems a cauldron of chaos what with the civil war in Syria and now the Sunni Islamist militancy-ISIS, The Islamic State of Iraq and Syria, taking over Mosul, other Sunni towns and areas in northern and western Iraq that essentially erased the border between the two countries.

Then there's the Palestinian's in the West Bank suffering under the punishing apartheid rule of Israel along with the open air prison Israel maintains over the Palestinian's in Gaza. In Libya the original indigenous rebellion against Muamar Qaddafi-abetted by NATO's bombing campaign contributing to his demise-has degenerated into chaos with Islamist militants vying for power. Egypt after the coup of President Muhammad Morsi last July-terminating Egypt's first popularly elected experiment in democracy being short circuited-once again brought military rule over the Arab world's most populous state and seen the Muslim Brotherhood, Morsi's party outlawed with many of its members jailed and sentenced to death in a crackdown under General al Sisi, recently elected president in a recently held but rigged election.

Yet "chaos central" resides outside the Middle East in the hands of what Pepe Escobar, the roving reporter for "Asia Times" refers to as the "Empire of Chaos" none other than the government of the US. Yes that ignoble title is reserved for the White House and its current occupant, the Pentagon and its defense-war-department, the NSA surveillance crowd in Fort Meade that monitors all electronic communications of everyone in the world, the "wise, unwise men and women housed in the think tanks around the beltway who contribute mightily to "chaos central" whose policies and actions UNDERLIE the cauldron of chaos happening all over the Middle East.

Then there's the CIA. As one former analyst put it, "It's the function of the CIA to create instability all over the world. And boy have they been "successful" in carrying out their mission.

This monster-created by President Harry Truman in 1947 as the successor to the wartime OSS, Office of Strategic Services-has managed in its lifetime to stage coups in Iran in 1953, Chile in 1972, South Viet Nam in 1961 with the assassination President Diem of South Viet Nam and lately the coup in Ukraine in February. It initiated the infamous "Bay of Pigs" fiasco in Cuba in 1961 attempting to overthrow Fidel Castro, connected to false flag operations such as the "Gulf of Tonkin" incident where the North Vietnamese were falsely accused of firing on an American ship which became raison d'etre for President Lyndon Johnson to escalate the Viet Nam war in 1965. Then there's the infiltration of agent provocateurs into peaceful popular movements who initiate violence that brings a police crackdown-think the forceful removal of the 2011 Occupy Wall Street encampments. The there's the seizing of anyone anywhere in the world in extraordinary rendition, holding suspects in indefinite detention at "black sites"-Afghanistan, Poland, commit torture against detainees as evidenced in Abu Ghraib, Iraq in 2004; conducting lethal drone operations in Afghanistan, Pakistan, Yemen, Somalia as well as engage in special ops missions et al.

There are undoubtedly other horrors and atrocities committed by the boys in Langley; the above is just from memory. And remember its all done in defense of the country, the standard propaganda slogan fed to the American people to justify this otherwise criminal enterprise.

The truth is the criminal mayhem committed by the CIA has in fact caused more instability and chaos in the world than any other entity. It's astounding how this modern day troupe of legalized mafia remains in favor, but hey when its the clandestine intention of those in power to attain "Full Spectrum Dominance" over the world-that includes the air, seas, space, over a 1000 military installations world wide as well as exercising hegemony over the world, the CIA is just a small cog "doing its job".

Of course from time to time the excesses of the dark forces of chaos couldn't remain secret and stretched all the way to the White House and couldn't be contained. This of course occurred in the early 1970's with Watergate embroiling Nixon and his "boys" Erlichman and Haldemann were found to be engaging in and authorizing illegal clandestine operations that sometimes included the FBI and the CIA. That brought a special commission headed by then Senator Frank Church which did bring some oversight with the establishment of the FISA court that required warrants had to be secured before wiretaps would be authorized by the Court. Then there was Senator Sam Ervin's investigation of the Watergate scandal that eventually exposed Nixon and the cover up which would subsequently force him to resign. Then there was the Iran-Contra shenanigans in the mid 1980's-which involved the secret selling of arms to Iran and using the money to finance the contras in Nicaragua- embroiling President Ronald Reagan and his administration. This imbroglio brought the Tower Commission under Senator John Tower which along with the other commissions brought some reining in of the executive.

But in reality all these commissions and their intent were merely temporary inconveniences as today the Executive now wields unlimited power in complete disregard of the Constitution relying on Justice Department memos giving legal cover for all Executive decisions but kept secret for reasons of national security thereby effectively precluding ANY oversight by the Congress or the courts.

By any other name that's authoritarian dictatorship, but the Executive hides behind the fig leaf of the Constitution which it disregards at will.

Yet it appears most Americans have been so propagandized they don't seem to recognize their country has been usurped by an authoritarian dictatorship masquerading in the office of the presidency.

Maybe most people know it but don't want to acknowledge it; better to remain silent and subservient believing they can't do anything about it. Ah sorry; that won't do. That just makes Americans silent accomplices to the crimes their government commits.

Remember everything the government does is in the name of the American people. It's the people's government and we've allowed this to happen. Chew on that for awhile.

Retired. The author of "DECEIT AND EXCESS IN AMERICA, HOW THE MONEYED INTERESTS HAVE STOLEN AMERICA AND HOW WE CAN GET IT BACK", Authorhouse, 2009
Related Topic(s): Central Intelligence Agency; Chaos; Government; Policies; Propaganda; Truth, Add Tags
Add to My Group(s)
Go To Commenting
The views expressed herein are the sole responsibility of the author and do not necessarily reflect those of this website or its editors.