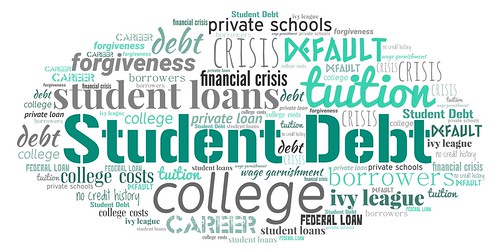 Would you like to change the world? Perhaps that's a bit too much. How about changing the country? You might laugh at this notion, but if you believe it, come up with a quality concept, and work hard, you can achieve it. It has happened many times before. We'll take a look at a few examples below, but first we need to get something under control. That something is debt.

It's difficult to grow when you have debt because some of your capital must go towards paying back, as opposed to growth. And if you're like most entrepreneurs looking to launch a new business, then you have student loan debt. You gained all of the technical knowledge you needed in college, but it was expensive. That's okay because it was an investment in yourself. At the same time, now you might have debt hitting you from different angles, which can be frustrating. Fortunately, there is a way to get your debt under control.

Before you brainstorm and potentially launch a culture-changing product or service, it's imperative that you consolidate your debt. It's recommended that you do your own research to find the best option for you. Student loan consolidation is a process that combines multiple student loans with different rates and term lengths into a single loan. This should lead to lower payments and simplify your debt.

As we all know, Amazon has completely changed the retail landscape. What some people might not realize is that Amazon has also changed American culture. If you go back to a time before Amazon, in order to buy something, you need to go to a brick-and-mortar retailer. Going to the mall was a popular event that people would look forward to because of the people, in-store-browsing, and overall high energy. Today, only malls that offer entertainment to drive traffic have high energy. Many malls have shut down due to low traffic. Amazon's rise also led to the death of Borders, Toys R Us, Sears, and many other smaller names.

Believe it or not, one retailer was even more influential on American culture than Amazon. Macy's was the driver for people to come out and shop. By adding window displays and an in-store Santa, consumers would come out in droves. Other retailers followed suit and window shopping became the norm. Macy's was also wise to add the Macy's Thanksgiving Day Parade in 1924. This was a brilliant branding move that paid enormous dividends.

In 1873, Levi sold something called waist overalls to miners during the gold rush. They were $3 each. It didn't take long for these waist overalls to be called blue jeans, and they now sell for a lot more than $3. What's most interesting here is that the cultural influence wasn't intended. What was originally designed for miners is now something worn by the masses for comfort. Starbucks is another good example. Unlike Levi, Starbucks was created with the intention of the changing the landscape. This was done by making customizable coffee in a comfortable environment where people could convene and have free access to WIFI. That free WIFI allows students to study and professionals to catch up on work while drinking coffee and eating snacks. Perhaps this article will inspire you to form your own concept that can change the American cultural landscape. It would certainly leave a legacy.

Justin is a 40 year old father of 3. He has a passion for content, home improvement projects, and interacting with others via blogging.

Related Topic(s): Change, Add Tags
Add to My Group(s)
Go To Commenting
The views expressed herein are the sole responsibility of the author and do not necessarily reflect those of this website or its editors.

Ways to Future-Proof Your Home

The Top 4 Myths About Trading and Investing

Five Ways to Learn Something New and Boost Your Career Skills