Koziatek's campaign site includes this picture of the candidate with Gavin Newsom even though the governor is not listed as an endorser.
(Image by Marilyn Koziatek for School Board 2020 General)   Details   DMCA
tps://youtu.be/eYQOaU0C6WI?t=16">This is not the way to approach me"
- Marilyn Koziatek

During a publicly noticed meeting that complied with the Brown Act, the Northridge East Neighborhood Council (NENC) Education Committee made plans to host a candidate forum that would give LAUSD School Board candidates Scott Schmerelson and Marilyn Koziatek a chance to interact with potential voters. The committee agreed to include this forum on the agenda of the September 2, 2020, meeting.

Perhaps coincidentally, a complaint was filed with the Los Angeles Department of Neighborhood Empowerment (DONE) about the candidate forum. In a move that continues a disturbing trend of the department attempting to limit the scope of neighborhood councils, DONE sent an email two days before the event "recommending" that the committee cancel or postpone the event. The reason given was that "this type of forum should be presented at an NC [neighborhood council] Town Hall and/or in conjunction with an NC Board Meeting."

The response sent immediately to the DONE representative asked the department to detail the specific rule that prohibits a committee from holding a candidate forum. Less than twenty-four hours before the scheduled start time of the meeting, the city representative sent an email that reiterated the "recommendation" that the committee should postpone the candidate forum. This time, an entirely new reason was given. DONE now insisted that the NENC board needed to vote to approve the forum. As a matter of practice, the NENC board does not approve committee agendas and the forum was announced by the board president at the previous general board meeting.

Instead of canceling the meeting, changes were made to comply with DONE's newly indicated rules, preserving the ability of stakeholders to interact with candidates for public office. Another email was sent to the candidates informing them that while the committee would not be able to conduct a question and answer session, accommodations would be made to the public comment period allowing them to address the committee and other participants in the meeting. The questions submitted by the stakeholders in advance of the meeting were also forwarded to the candidates. 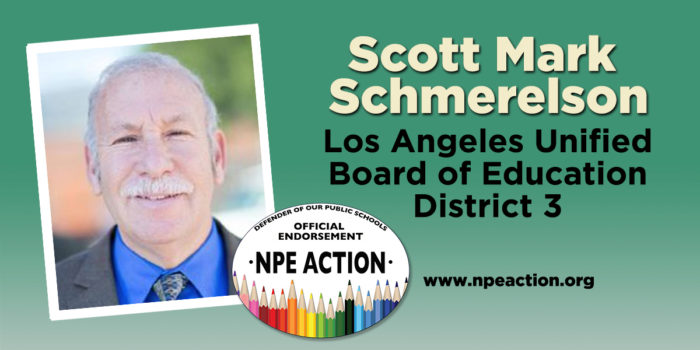 Scott Schmerelson's endorsement on the NPE Action web page.
(Image by NPE Action)   Details   DMCA
Schmerelson accepted the invitation and used his time to provide participants with an update on the LAUSD. The Grab and Go program that is providing food for both students and adults during the COVID-19 pandemic was one of the featured topics. The search for applicants for the Board District 3 Student Advisory Council was also discussed. This advisory council is composed of at least one student from every LAUSD Board District 3 high school and allows students to share their feedback, opinions, and ideas directly with the school board member. The deadline to apply online is Thursday, September 10, at 11:59 PM.

Comments were not made by Koziatek or any member from her campaign. This provides another example of the challenger refusing to engage on the issues, which runs counter to her stated platform of increasing community and parent engagement. If she is this difficult to interact with while she is asking for the community's vote, how will she interact with them if she is elected into office?
________________________________