The decision to not release photos of a dead and fatally wounded Osama bin Laden rests on a tenuous set of reasons, which consist purel of Beltway conventional wisdom.

The argument that the release of photos could inflame the Middle East has been made before (recall the Obama Administration blocked the release of "torture photos" in May 2009 that the ACLU was seeking to obtain through a Freedom of Information Act request). Greg Mitchell with The Nation reminds Americans of the debate that surrounded the decision to release photos of Abu Musab al-Zarqawi after his death.

Jon Stewart made a good point last night on "The Daily Show":

We've been fighting this war for nearly ten years. Thousands of US deaths, tens of thousands of Iraqis have died and we've seen nearly zero photographic evidence of it. Member how long the media had to fight to show military coffins returning from overseas? Maybe not because you saw pictures of it the day they won the case and not since. Maybe we should always show pictures. Bin Laden, pictures of our wounded service people, pictures of maimed innocent civilians. We can only make decisions about war if we see what war actually is and not as a video game where bodies quickly disappear leaving behind a shiny gold coin.

Essentially, the key argument should not be that the photos should be released to debunk conspiracy theories (which the White House has helped fuel by not really getting all the details straight on the bin Laden killing). It shouldn't be don't release the photos because it will hand Republicans a victory and they won't be satisfied and will just ask for more like Donald Trump wants to know more even though he got the president to release his long-form birth certificate.

The argument should be that Americans see the photo so they can see what they have been celebrating. They should see the image of brutality, which so many vehemently believe is justified.

What makes anyone think photos of celebration at Ground Zero or the White House on the day bin Laden was killed won't inflame the Middle East or haven't already provoked some cell of terrorists to plan a new scheme for attacking America? 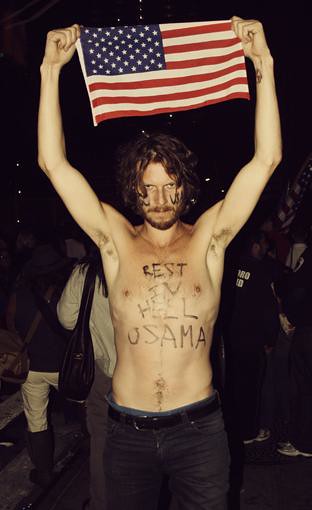 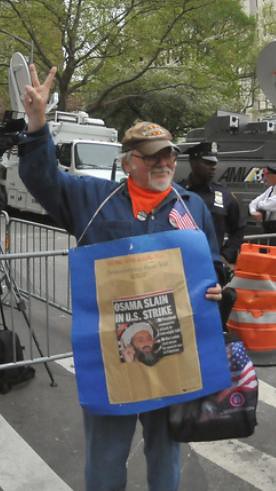 
Even this seemingly benign photo could inflame those who would support al Qaeda's mission against the West. The flag-waving in celebration of the execution of a human being on their side is enough to move them to organize an attack.


The front pages of the editions of The Daily News and the New York Post that ran the day after bin Laden was killed are enough to inflame those sympathetic to al Qaeda's cause too. The Daily News' front page said, "Rot in Hell!" The Post's front page cried, "Vengeance at last! US nails the bastard!" The first sentence in the Post read, "We finally got the miserable son of a b*tch."

This irresponsible tabloid journalism was being gobbled up by New Yorkers as a reasonable characterization of what went down. People hung the front pages up nearby Ground Zero and took photos of the front pages posted on a wall.

This photo of university students should have the US national security establishment frightened not because students shouldn't be allowed to go to spontaneous and patriotic Spring Break-type events, where they act like they are at a pep rally for an upcoming football game. The photo should have those in government worried because that girl with the cigar in her mouth could easily remind the terrorists of this girl with the cigar(ette) in her mouth.

Kevin Gosztola is managing editor of Shadowproof Press. He also produces and co-hosts the weekly podcast, "Unauthorized Disclosure." He was an editor for OpEdNews.com
Related Topic(s): Bin Laden Dead; Citizens; Death; Images -Photos; Osama Bin Laden; Secrecy - Transparency; Security; Terrorists-Terrorism; Torture; Torture Photos; (more...) Wikileaks, Add Tags  (less...)
Add to My Group(s)
Go To Commenting
The views expressed herein are the sole responsibility of the author and do not necessarily reflect those of this website or its editors.